Mexico is a beautiful country found in southern North America and is the third-largest country in Latin America. From its rugged, arid northern region to its tropical southern border, Mexico features diverse landscapes and cultures. Because the country lies on the Ring of Fire — the junction of several tectonic plates — Mexico is home to volcanoes, crater lakes and mountain ranges. Mexico also bears the heritages of the Aztec and Mayan people. Along the Yucatan Peninsula and through the southern territory, there are ancient pyramids and city remains left from these empires. Tourists flock to coastal towns like Tulum and Cancun to enjoy the pristine beaches and mysterious ruins.

Sadly, there is a large income inequality in Mexico with extremes of wealth and poverty. There are widespread human rights violations and more than 20,000 children trafficked every year. Although there are tragic realities in Mexico, there are also amazing peoples and fascinating traditions. Today we’d love to celebrate this wonderful country where over 58,000 Compassion-assisted children live! Here are some fun facts about Mexico!

Here are some quick, interesting facts you should know about Mexico.

Culture and Traditions of Mexico

Mexico is a vibrant country with many distinct cultures and people groups. It is impossible to share all the interesting facts there are to know about Mexico, but here are some highlights!

Religion: The Mexican constitution protects religious freedom and provide separation of church and state. Religious rights are generally respected; however, in certain southern areas, political, cultural and religious tensions continue within some communities. About 83% of Mexicans identify as Catholic, while 7% are evangelical and 8% identify with other religions or profess none.

Clothing: Most Mexicans dress in styles similar to those of the United States or Europe but with greater modesty — particularly in rural areas. Men may wear slacks, button-down shirts, T-shirts and jeans, while women may wear skirts, dresses and blouses as well as T-shirts and jeans. There are various styles of traditional clothing in Mexico reflecting the different Indigenous people groups and Spanish colonial influences. Typically, the clothing is bright, embroidered and colorful. For men, traditional clothing includes the “sarape” (a shawl-like coat), the “charro suit” (an embroidered suit), the “guayabera” (a lightweight cotton shirt), the “Baja jacket” (a hooded shirt), the sombrero, and the poncho. Women’s traditional dress includes the “huipil” (a sleeveless tunic), the “quechquemitl” (a festive poncho), the “rebozo” (a shawl/scarf), colorful skirts, and vibrant dresses.

General culture: Mexican culture is a mosaic of ancient civilizations and Indigenous people along with European colonization. Most of the population is mestizo (Amerindian and Spanish) or Amerindian, and about 10% is European. Day of the Dead, Feast of Our Lady of Guadalupe, and “Semana Santa” (Holy Week) are just a few of the many festivals that celebrate Mexican heritage. Soccer is the most popular sport in Mexico, followed by baseball. “Jai alai,” a type of handball, is also popular.

Music and Dance of Mexico

Two beautiful and essential parts of Mexican culture are music and dance! From the peppy sounds of mariachi bands to flamboyant folk dances, Mexico is alive with rhythm and movement.

Mariachi is one of the most famous forms of Mexican music. A mariachi band typically has at least four members but may have more than 15. The musicians, dressed as Mexican cowboys in charro suits, play violins, trumpets, guitars, “vihuelas” (a variation of a small guitar) and “guitarrones” (a variation of a large bass guitar). Mariachi songs feature heavy syncopation and a rhythmic pattern that alternates between 3/4 and 6/8 time.

Ranchera music is another popular Mexican style that draws on traditional folklore. Common themes in ranchera music include love, patriotism and nature, while the tempos may vary from waltz to polka to bolero (slow-tempo Latin music).

The Indigenous as well as Hispanic and African influences formed a plethora of unique dances. The national dance of Mexico is the “Jarabe Tapatío,” also known as the Mexican hat dance. The Jarabe Tapatío is a lively courtship dance with choreographed steps. Many Mexican children learn this dance, and it is a mark of national pride.

There are countless traditional dances from all regions of Mexico. In the “La Conquista” dance, the story of the Spanish conquest is narrated. In the “Danza de los Viejitos,” translated as “the dance of the old men,” male and female performers dance in hunched fashion meant to mock the Spanish upper class. The “Danza de los Voladores” (the dance of the flyers) is an ancient ceremony of the Mesoamericans. This daring performance features five brightly dressed men who scale a 30-yard-high pole. While one remains at the top playing the flute or drum, the other four tie themselves to the top of the pole with long ropes before lowering themselves backwards and spiraling towards the ground.

Food and Drink of Mexico

If you’ve ever tasted authentic Mexican food, you know that it is delicious! Corn is the main staple, often in the form of tortillas. Beans are also popular; they offer an inexpensive source of protein. Fruit, vegetables, rice and meat or seafood are also common. Here are a few popular dishes.

Tamales are delicious pockets of corn dough stuffed with meat, cheese or beans and wrapped in corn husks or banana leaves. The packages are either steamed or boiled and are served hot.

Horchata is a rich traditional drink made from white rice, water, milk vanilla, cinnamon and sugar. The rice soaks in water for several hours and then is strained out — leaving a creamy liquid. Flavorings and sugar are added, and then the beverage is chilled before serving.

Paletas are the perfect way to cool off on a hot summer afternoon. These Mexican-style ice pops come in many varieties. They can be made with chunks of fresh fruit, nuts, rice milk and even chili powder.

A Story From Mexico: From Shy Teen to Bold Radio Show Host

Fifteen-year-old Itzel used to be naturally quiet, reserved and shy. But that all changed when Itzel’s Compassion center provided her with the opportunity of a lifetime …

A while back, Itzel’s center launched a Christian radio station in its town called “Nueva Vida,” or New Life. Like many rural communities in Mexico, Itzel’s town has limited access to other media like the internet or television. Radio is the primary avenue for mass communication.

When Nueva Vida lost its only announcer, one of the leaders at the Compassion center had a brilliant idea: Create a program to train young people to become radio announcers. Itzel decided to join.

“I wanted to do something different for my community,” Itzel says. “And I knew that through the radio, I could share the love of God with other youth.”

Itzel trained for a whole year. She read books about broadcasting and took classes about the technical side of radio. It was a long year, but by the end, Itzel was ready to take her place behind the microphone.

Since then, Itzel has been the announcer for Nueva Vida. Callers look forward to her shows, during which she teaches about the Bible, asks thought-provoking questions and plays fun trivia games, encouraging her audience to call in.

Now, Itzel is a confident leader and role model in her community. She dreams of one day attending a university and studying communications. Plus, she’s even helping to train a new generation of announcers for Nueva Vida at the Compassion center.

“I like how Itzel speaks so fluently, as well as the message she gives to people through the radio,” says Rubi, one of Itzel’s young trainees. “Since the first day I heard her, I knew I wanted to be like her.”

Mexico is famous for its “cenotes” — natural pits or sinkholes resulting from the collapse of limestone bedrock that exposes groundwater underneath. Found along the Yucatan Peninsula, these cenotes are not only beautiful places of biodiversity and water reserves, but they also hold ancient Mayan artifacts and art.

Photos of What Daily Life is Like in Mexico

Do you want to keep learning about the beautiful country of Mexico?

Facts About Compassion and Mexico › 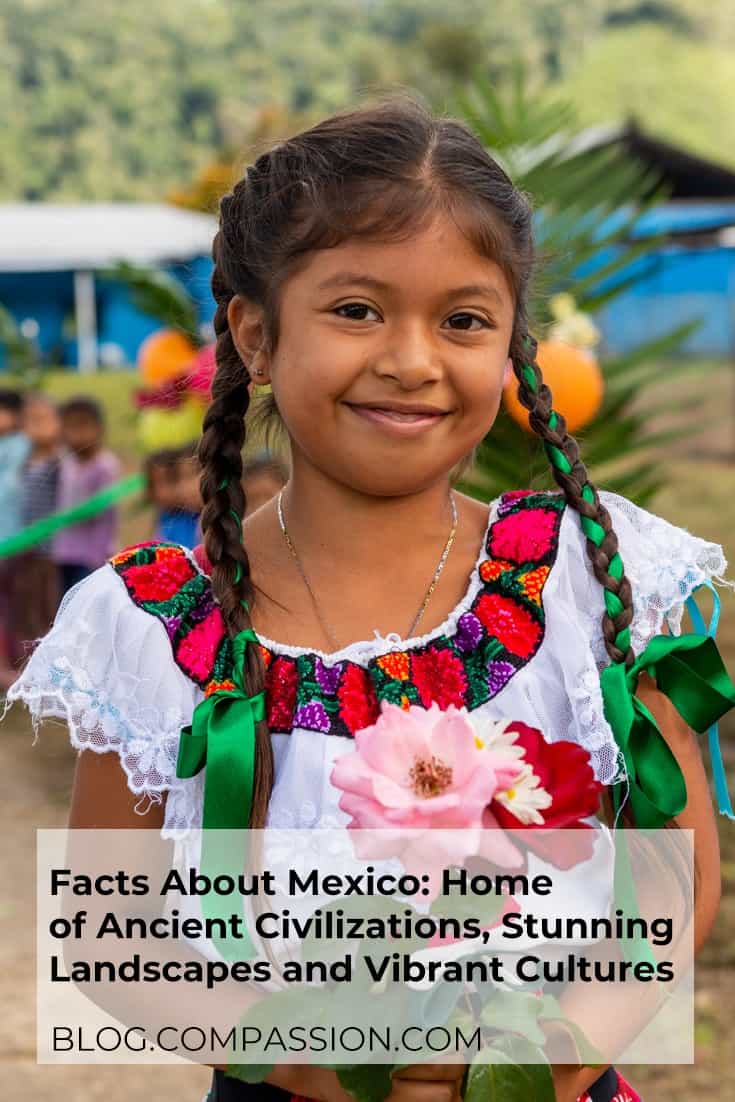