Ever Wondered: Why Do People Donate to Charity?

Working for this global ministry, there’s much to be fascinated by, but one thing that constantly amazes me is how so many regular, everyday, hardworking people are extremely generous in their giving.

In fact, people gave so generously this past year that Compassion surpassed $1 billion in revenue for the first time in our ministry’s history! That kind of giving is inspiring! But more than that, it’s going to bless more than 2.2 million children by helping them feel known, loved and connected as we work in partnership with sponsors, donors and local churches to release them from generational poverty in Jesus’ name.

But, being the naturally curious guy that I am, I wondered why people were so generous. I wondered: Why do people donate to charity or ministry at all? What do they get out of giving?

Turns out, there’s a lot of science behind the reasons for why people give.

The science: 5 reasons why people donate to charity

The fact that we feel compelled to give — even in regards to things like birthday gifts or presents of affection — is a drive that is universal. Anthropologists have found that every culture on the planet practices giving. And it’s been that way all throughout recorded history.

More recently, sociologists and behavioral psychologists have shown a combination of these following five drivers are common in any situation where people give:

Sounds simple enough, right? Someone asks you, and you feel obligated to give them what they ask for.

This is the most common reason people donate to charity, too. In fact, according to a survey among charitable givers, more than 85% said that they gave as a direct result of simply being asked to give. And it makes sense that this would be the top reason according to behavioral science, because the simple act of asking conveys need.

Most people feel obligated to help others in need, but people don’t generally spend every moment of the day searching out the areas of need around them. So directly asking brings the need to their attention.

2. A sense of altruism

Because humans have the capacity to care for one another, we generally don’t want others to suffer. So it’s no surprise that many donors cite their altruistic belief that it’s important to them to help others as a reason why they donate to charity.

From a scientific perspective, being altruistic is good for your health. The act of giving releases serotonin (a mood-mediating chemical), dopamine (a feel-good chemical) and oxytocin (a compassion and bonding chemical) in our brains, making us happier and healthier. Studies have shown that through the act of giving, you might even live longer.

3. Trust that the organization will make a difference

Trust is a big reason for why people give, but it’s not always necessary — at first. Think of the person you see on the street corner asking for change. You have compassion on them and give them a dollar or two, but do you believe them when they tell you they intend to use the money for food or to find a place to stay?

The same is true for charitable organizations. When asked, you may still feel obligated to give once, but chances are you probably won’t give to a charity again unless you trust it to actually extend your altruism and make a difference for others. And this is where the science of trust in giving is best displayed. Behavioral studies show that establishing trust is critical for turning one-time givers into regular donors and sponsors.

In Compassion’s case, it’s typically our current sponsors and donors who are passionate about helping children to have brighter futures who are our best fundraisers and acquirers of new sponsors.

5. Egoism — expecting to receive some personal benefit or tax reward

According to behavioral scientists, people expect to get some kind of reward for their generosity, even if they expect it subconsciously. In most cases, that reward is simply the good feeling that comes from giving. Sometimes it’s the feeling of being recognized and looking generous to others. And while hardly anyone who responded in donor surveys stated they primarily gave because of the tax benefit, most people said it was a consideration that contributed to their decision on which charity to give to.

The BIG biblical reason: Giving is a reflection of God’s image in us

One thing that has confounded secular scientists is how it seems humans are born to give. A study done by University of Washington’s Institute for Learning & Brain Sciences of nearly 100 19-month-olds found that the children, even when hungry, gave their food to a stranger in need. While much of how we act is based upon learned behaviors, giving and helping seems to come naturally, almost as if it’s a design feature. In fact, it is! The biggest reason that motivates people to give is because we are made in the image of God.

God is a giver, so as his images, we, too, have an inherent need to give. We are simply designed to give. And if that isn’t enough, we are mandated to give. More than 100 verses in the Bible tell us to generously give.

Pray about when and where you should give. Of course, we would love for you to help change the future for children living in extreme poverty by giving monthly and becoming a sponsor, but more than that, we want you to hear God’s prompt for your heart. Lift up your giving in prayer and ask God to show you where he wants you to give. Talk with friends and ask for recommendations, or consider the ways you would like to see the world better off. Chances are there is a reputable charity serving the need for that cause. Check out the Charity Navigator website to find charities you can trust.

What do you think about the reasons I’ve shared for why people donate? Do you agree or disagree? What motivates you to donate? I’d love to hear your stories and thoughts in the comments below. 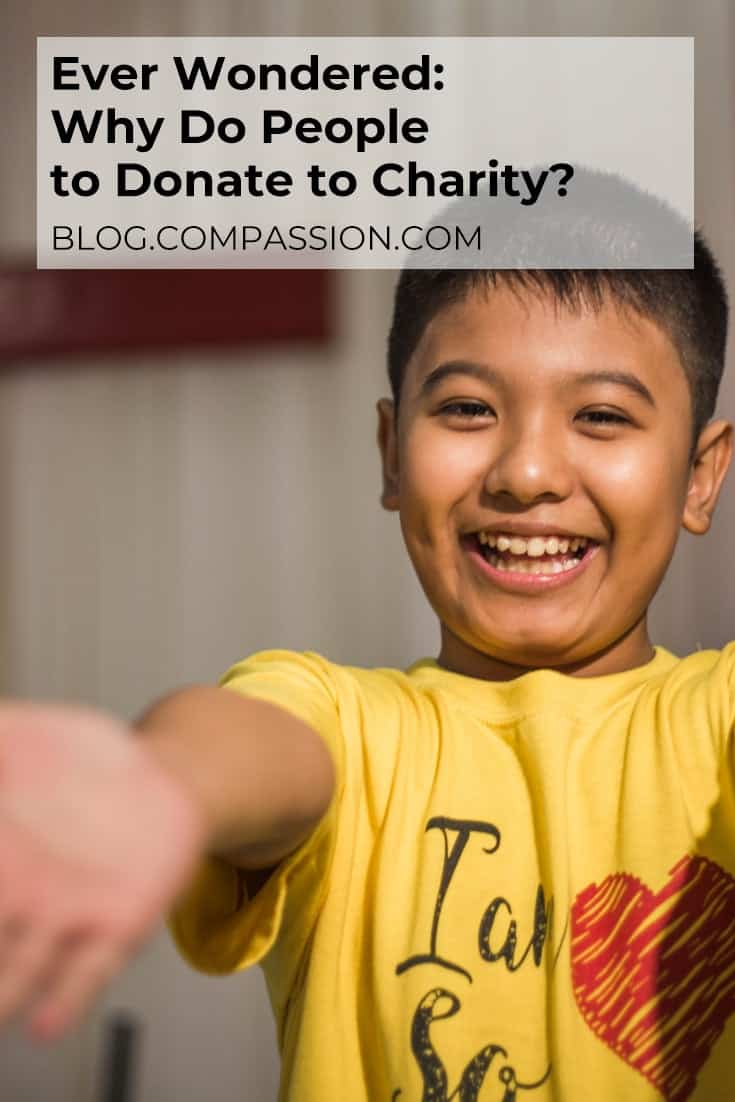 Join the Cause, Sponsors and Donors