I wasn’t looking for another child to sponsor. But then I saw two things next to her picture on the website: a red heart and a red ribbon. Josiane, from Rwanda, had been waiting for a sponsor for over six months.

The red ribbon showed that Josiane lived in an AIDS-affected area.

Online, as I added Josiane’s sponsorship to my account, I took the opportunity to pay an additional $8 per month to give to the HIV/AIDS Initiative Fund.

According to UNICEF, 2.3 million children in Africa live with HIV and 14.9 million are orphaned by AIDS.

For the cost of a couple of fancy lattes a month, I’ve chosen to give to the HIV/AIDS Initiative Fund which does the following for Josiane and our other 470,000 + African beneficiaries, and their families:

END_OF_DOCUMENT_TOKEN_TO_BE_REPLACED

By: Lauren Di Cecio Categories: Advocacy, Join the Cause, Poverty 101 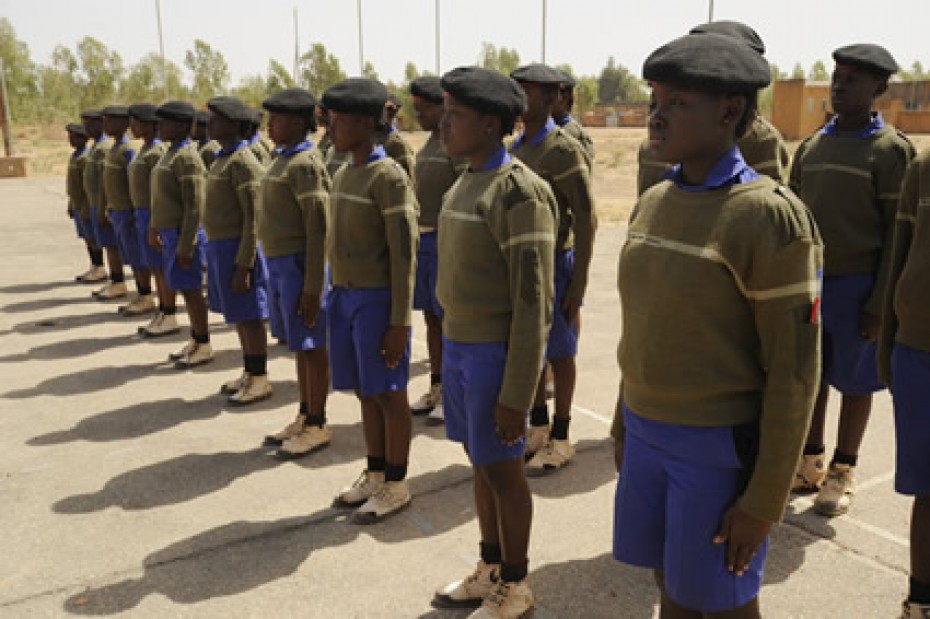 The battle is not ours to win or lose. We are not called to success. We are called to trust.

By: Lauren Di Cecio Categories: About Compassion, Employees and Culture

Now, I know the organizational structure of a company is not all that exciting, but it does say a lot about how an organization is run, what its priorities are and how it tries to achieve its objectives.

Just take a look at your church.

Now say it’s located near an inner city and its main goal is to do targeted outreach. Now the church is potentially lacking in both talent and funding to achieve its outreach goals.

Mission and budget are crucial pieces of the puzzle for an organization. They drive strategic planning one year and five years down the road and govern the here and now.

They help dictate the best structure of an organization and enable managers to make important decisions around hiring — Who? For what purpose? When?

Last year alone Compassion grew by 371 full-time employees — a 19 percent increase. We have more than 1,500 International Program staff in the field — 67 percent of our total staff is made up of nationals. That says a lot about how we use our resources and go about our mission.

Organizational structure is important, especially for us as we have been growing so rapidly.

Well, let’s take a quick look at the mission-keepers and budget preparers at Compassion. They fit under the umbrella title Global Support Services and are one part of what makes things tick here in Colorado Springs. END_OF_DOCUMENT_TOKEN_TO_BE_REPLACED

So to follow up on the clock analogy, what makes Compassion tick? Which gears and teeth make Compassion run and how?

Are there letter-writing genies in the basement? Does Compassion’s headquarters even have a basement?

Do Santa’s workshop personnel kick it here during the off-season addressing and licking envelopes and sleighing over to Togo, Indonesia and Honduras to drop off sponsor letters? Payroll and finance must have a tough time keeping up with the influx of elfishness.

No genies. No basement (that I’m aware of). No elves. No sleigh. (Although there may or may not be a task force looking into the cost benefit analysis of said magical sleigh. Postage is expensive.)

Today, I will break this down into a very high level overview. It won’t be totally satisfying but one must start somewhere. We can get into the nitty gritty later.

First the Ministry Paradigm. Or rather, my version of it. Before you tune out, the Ministry Paradigm is basically a high-level representation of how Compassion is organized to best serve children.

And when you think about it, every organization should have a specific goal: mainly to take the mission and vision, devise a strategy to implement change, employ specific operations to reach the desired outcomes, and measure them along the way to gauge impact. Right?

Now, we’ve got two sides of the equation. Two main feeders serving Compassion’s children — church partners in the field and sponsors here in the U.S. (and abroad). A gross misrepresentation, but go with this analogy: hands and money. END_OF_DOCUMENT_TOKEN_TO_BE_REPLACED

A Prologue to How Compassion Works

Lest I misled readers with my first entry on the epic move from New York City to Colorado Springs, I must confess that I am not a true city slicker.

While yes, I did most recently come from NYC, it was only a two-year stint for graduate school. An unfortunate amount of that time was spent in a university library.

I grew up in a suburb 30 minutes outside “the city,” as it’s referred to. (There apparently is no other city comparable in the world according to New Yorkers, so the definite article is used.)

My town was pretty standard: backyard, front lawn, dog and cat, older sister who bossed me around, friends “on the block,” peanut butter and jelly in a paper bag, squashed.

I walked to school, played kickball in the street and stoopball at my grandma’s before requisite the 19-course Sunday meal.

And while man’s talent seems to reign supreme in Manhattan’s skyscrapers and Broadway shows, God’s talent reigns supreme here in Colorado Springs at Compassion. From the glory of Pikes Peak and tremendous Colorado thunderstorms, to the daily happenings in the conference room near my desk at Compassion, God is sovereign and present.

Part of my first three months here at work has been spent trying to figure out how Compassion functionally works. And that is what I’d like to pass along to any interested readers.

I won’t bore you with a PowerPoint presentation on the organizational matrix, but I will attempt to scratch the surface of a beloved organization in order to help us all understand what makes Compassion tick and how it actually does the ticking.

But first, here is the surface.

In order to release children from poverty in Jesus’ name, we’ve got to implement programs that reach the children. That requires funding and support.

So, Compassion is set up to do all three: attract and engage sponsors and donors, provide shared support services, and implement programs. And mind you, my next posts will not be the official version. So please, take this with a grain (lump) of salt.

I’m still getting my bearings here and will be drawing from large corporate documents, orientation presentations and conversations with co-workers.

So, while I’m striving for integrity of information, do not take this as canon, but rather the unofficial version. Understood?

Be assured that it will also unavoidably be tainted with my humor, which often falls flat.

Thanks for coming along for the ride!

A City Slicker Comes to Compassion

“So you moved from New York City … to Colorado Springs? Wow.” Full stop. “That must be a big adjustment …” And that is the most common reaction I (right) get. What makes me chuckle though is the momentary look of utter confusion that passes over a person’s face as the “How” and “Why” questions begin to percolate, fighting their way to the mind’s surface.

It is as if my co-worker could, for the very briefest of moments, still get a whiff of the cab that took me to NYC’s LaGuardia Airport three months ago. The taxi driver was a cologne-toting, disco-listening, ’70s throw-back who threw even me for a loop, so I wouldn’t be surprised if there was a strange co-mingling of cab and cologne left on me.

But in all honesty, I chuckle at myself more than anything. Because I fully realize I do it, too, right back at my co-worker telling me he is from a distant town in eastern Texas or a one-stoplight town in Nebraska.

And I go shuffling frantically through the file folders in my mind to come up with something, anything, only to arrive at the “N” section out of breath. I find that my Nebraska file is empty — save for the dusty “Lincoln” filed in 1987 during the lesson on state capitals that I never mastered.

Slightly embarrassed, I refocus on my conversation partner, knowing that my sheepish smile is perhaps conveying an equally disconcerting non-meeting of the minds.

I chuckle, thanking God for humor and grace. And that’s what makes the world go round — God. I suppose that is how I landed here in the Wild West after all.

And by “suppose” I mean it was all Him, and by “here” I mean Compassion International’s Global Ministry Center in Colorado Springs, Colo.

One of the best parts, right off the bat, has been realizing that these momentary non-meetings of the mind are so unbelievably insignificant in the face of a mission so clear and near to God’s heart — releasing children from poverty in Jesus’ name.

Over the last three months I’ve been learning about my co-workers. Nebraska, for example, is a brother and a friend who dispenses grace like orange slices at a kid’s soccer game.

The once shamefully empty file folder in my head is bulking up very slowly with remnants from his life and how God is continuing to make him a man after His own heart. I can now locate Nebraska on the map, and even the town where he’s from.

And this has been my experience thus far of Compassion-ites. Truly amazing. Amazingly talented. People of creativity, ambition, grace and, oddly enough, compassion.

Another amazing part about work at Compassion so far is knowing that in some teeny tiny way I’m able to do something for kids growing up in poverty — the ones struggling to fight the lies that tell them they don’t matter and will amount to nothing.

I played soccer with them in Brazil and lost miserably; I was blessed to visit them in Panama at their schools and was humbled at the loving reception; I was toured around cities in Tanzania by kids living and working on the streets. Kids on glue to quell hunger pains, but kids eager to hold my hand and show me their world.

I’ve seen their resiliency and determination in the face of impossible circumstances and I know that God is in their midst. That His presence is there.

So maybe the fax machine near my office intimated me on day three, and maybe I can’t find pizza with decent crust in this town, and maybe I’m still fumbling around in my new role here at Compassion, but the list of things that just don’t matter in light of God’s glory, continues to grow.

And hopefully I’m growing too.

So, in response to the “How” and “Why” questions on my cross-country move … I suppose airplane, moving truck and God don’t really suffice. But what I see in my mind’s eye is liquid grace trickling through God’s labyrinth, running together and overflowing. Joining New York, Nebraska and Compassion International.

And now, a 12-year-old girl in Colombia, Elizeth, I’m blessed to sponsor. Humbled for perhaps the billionth time in the last three months, I thank God. Daily.