Before and After Safe Water: 20 Powerful Photos

In northern Uganda, young Betty once faced a frustrating choice: walk nearly 4 miles to fetch water that cows and pigs also drank from, or drink from the nearby well, which was wriggling with worms. She was one of the 2.2 billion — or 1 in 3 — people around the world who do not have access to safe drinking water, according to UNICEF. The impact means hundreds of thousands of children under 5 die each year from preventable waterborne diseases.

For Betty, a safe water point changed everything. No longer is she one of the shocking statistics — she has clean drinking water at the turn of a tap. Access to safe water changes more than just a child’s health. It can improve their education outcomes and even their family’s financial situation.

See for yourself! Meet Betty and other children whose lives changed after they gained access to safe drinking water.

Seven-year-old Nicolas stares at the pipes in a ditch that represent his community’s water. His neighborhood isn’t connected to the public water system, so residents set up a pipeline to a neighboring community’s supply. Unfortunately, the water is contaminated. “Many of the children have illnesses caused by poor water quality, such as diarrhea, stomach pain and vomiting,” says Compassion center director Sindy.

After 200 vulnerable families received their own water filter systems through Compassion’s church partner, including Nicolas’, their health has been transformed. “The water from the filter tastes very good,” says Nicolas. “My stomach does not hurt anymore!”

Evelyn and her young daughter Betty had to make nearly 4-mile journey to fetch standing water each day. The only alternative was drinking from a flooded well, which was wriggling with worms. “We had to drink from the same water the cows and pigs drank from,” says Evelyn. “My auntie died because of this dirty water. My daughter got sick three times.”

“Ever since they brought in the new water, my child has not suffered from any water-related diseases like typhoid,” says Evelyn. The new water point has four faucets and a 10,000-gallon tank providing fresh, safe water for the entire community.

Diarrhea, kidney stones and parasites are common health problems in Ae-plaetoo and Blaetoo’s community in northern Thailand. Residents collect water from the small pools next to the dangerous, fast-flowing river. “The water here, it’s not clean and there’s a lot of dust,” says Blaetoo. “Because we get water straight from the river, we need a filter.”

These best friends pour the water straight into their Sawyer filtration system, which makes it safe to drink — no matter what the river conditions might be. Ae-plaetoo’s smile says it all!

“The children were weak, thin, didn’t eat and were lethargic. It wasn’t normal,” says Pastor Sernaqué of Compassion’s local church partner. In Tamarindo, families had no choice but to use the contaminated Chira River for their drinking water. As a result, more than half the children at the Compassion center suffered from intestinal worms.

Through a water purification system installed at Compassion’s church partner, the whole community now has access to safe water.

“The children are now good!” says Pastor Sernaqué. “Their color has improved, and they are brighter and happier.”

In Princess’ impoverished community in Cebu City, plastic water pipes run past open sewers. They lead to the few homes that have faucets, but even then they only provide water early in the morning or at night. The town has struggled with the water shortage for over a decade.

The aptly named Child’s Haven Student Center, where sponsored children go for Compassion program activities, has a tiled bathroom facility so children can wash and access clean water on tap.

“It is a great testimony in this community that God’s church is equipped with a reliable water supply and hygienic facilities.”

For generations, 9-year-old Kantida’s village in northern Thailand has not had access to safe water. The same river families bathed in and washed their clothes in was also the source of their drinking water. As a result, children suffered endless health issues from waterborne diseases.

“For the first time, I don’t feel sick in my stomach after drinking water,” she says. “I am so grateful for Compassion for helping my family to get a water filter.”

In 5-year-old Mary’s district, a survey by Compassion Togo revealed just 3 percent of families had access to potable water — including hers. “We shared the river with oxen and other livestock,” says her father. “Because of that, my children often developed stomachaches. And when the river dried up, I had to travel about 20 kilometers (12.4 miles) away to fetch water.”

Little Mary no longer has to depend upon the river when she wants a drink. “I am happy for the water at the center, because it is closer to us and easier to collect. The water from the tap is very clean and much sweeter than the river water.”

The well pump in Avishka’s backyard was convenient, but the water it produced frequently left her with stomach pains. The untreated groundwater also left her with brown stains on her teeth.

The filter from her Compassion center has given her whole family a new reason to smile!

Eleven-year-old Dipika’s bright smile hides the challenge she used to face: waking early to rush to the community tube well before the crowds. When the queue was too long, they gathered jugs of water from the nearby river. “I don’t like making her work to collect water before and after school,” says her father. “But I believe that a family that works together, stays together.”

A financial gift from her sponsor helped the family to purchase something they had dreamed of — a well in their own yard. Now they have access to fresh, safe water just yards from their home. “These days, I don’t even drink water from that jug,” says Dipika. “I directly take water from the tube well and enjoy the freshness of the water.”

In Akoua Grace’s village, children had no other choice but to drink unclean water from a dam used by cows. To make life more difficult, her mother, Akouvi, had to walk miles to reach it. “The water we had been drinking was very dirty,” she says. “I often had stomachache, fever, headaches and red eyes.”

In July 2020, a critical intervention from Compassion funded a borehole at the local Compassion center and transformed life in the village. “Since this water has come, sicknesses have reduced. We are free. We are in paradise!” says Akouvi. “I am so happy and don’t know how to express my gratitude.”

You can transform life for a child, family or community in need this World Water Day, March 22! 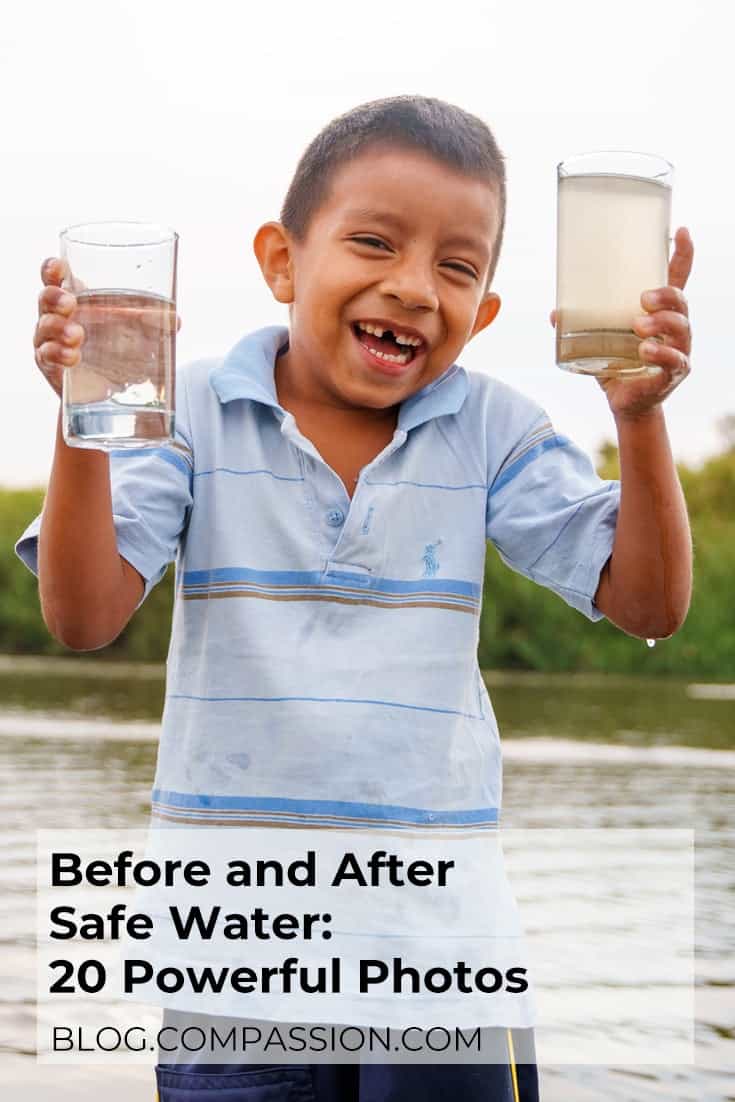 Zoe is a marketing writer for Compassion International.

Prev Post:How a Year of COVID-19 Has Changed Us ForeverNext Post:4 Ways Letter Writing Benefits You and the Child You Sponsor