In the United States, we don’t really think about it much because it’s so easy — you mail a letter or a package, and a few days later it arrives in the mailbox or on the doorstep of the person you sent it to. And when you order something online, it typically arrives in a couple of days — at most, a week or so later.

But mail and package delivery in the developing world is quite a bit more complex. In most cases, there is no next-day air to small, remote villages. And even if there were, because we take child protection so seriously, there is a series of checks and hand-offs that have to happen at the national Compassion offices all the way down to your child’s local center before your sponsored child receives his or her letter.

In almost every case, your letter travels a great distance, preserved with great care, by a whole host of people who treat your written words as though they were precious gold … because to the child you’re writing to — and, as you’ll see, even entire communities — your letters bring more hope and wonder than you could possibly know.

Let’s step through the process of exchanging letters with your sponsored child, and hopefully you’ll have a more clear understanding of:

This is the easiest part and most like what you’re probably used to. You write a letter to the child you sponsor and send it. Now, you can do that one of two ways … You can send a hard copy letter via mail to Compassion USA where, in most cases, we scan your letter and digitally send it to specially trained staff in the national office in the country where your child lives.

If you write a letter via the Compassion digital letter-writing platform, the digital scans are sent directly to the national offices in your sponsored child’s country — skipping the step of you sending a hard copy to Compassion USA.

Once the national offices receive your letters, either electronically or via courier, a small team of caring child advocates reads each letter. This may seem like an invasion of privacy, but they do this for very good reasons. The first reason is practical … most children don’t speak English, so translators at each country’s national offices, like Betey from Ethiopia, translate your words into the language your sponsored child understands.

“The thing that motivates me is knowing how important it is for sponsors and children to communicate. Kids should know what the sponsors really feel, and the sponsors should know how the kids feel about them. So, I do my best in translating whatever is in the letter,” says Betey.

The second reason every letter gets read is for the protection of your sponsored child and for you as the sponsor. The staff looks for any instance of accidental over-communication, such as:

Letters are also checked to make sure there are no inappropriate photos or any content that would degrade the dignity of the child. It’s been caught in the past.

Step 3: Obstacles in the journey

This process has been delayed while we observe safety recommendations as a direct result of the global pandemic. But typically after letters have been translated and reviewed, they are labeled, sorted and bound according to the receiving child development center.

Within each country, Compassion centers are clustered by region, with usually 12 to 14 church-based centers per cluster. Your letters are bound with other letters destined for centers within the same cluster, and then are sent through Compassion staff or via private courier to a pickup and drop-off point within a reasonable distance from each center in the cluster.

This is where it gets really interesting, because dedicated workers from each center then make long, hard and sometimes dangerous journeys to these pick-up and drop-off points for letters between children and their sponsors.

Take Wichean in Thailand, for example … he travels every week nearly two hours by motorbike from the high mountains to the main road where the nearest coalition point is. The journey is hard enough during the dry season, but when it rains, Wichean makes the trek on foot — navigating washed-out roads, mudslides and flooding. These conditions can be dangerous, but he’s honored and duty-bound to make the journey.

“What I do is not just one of my responsibilities, but it means so much to the children,” says Wichean. “And I feel so much joy in doing it.”

It may seem a bit mundane to you and me, but in small communities like those in the Volta region of Ghana, it’s rare to receive mail at all, let alone letters from someone half-way around the world. So when letters arrive, the center hosts an assembly where letters are handed out and everyone celebrates as though they received a letter of their own.

Esinam, a project director for one of the centers in the region says:

“When children get letters, the whole community hears about it and rejoices. For someone abroad to think about a child [here] and write to that child, it is a very big thing for them.”

Writing letters is also part of the child development program curriculum. The exercise of letter writing teaches children how to form handwritten letters properly and how to use proper sentence structure in their own language. It also helps children to practice valuable communication skills. That’s why, in most cases, workers at nearly all Compassion development centers help children to write letters to their sponsors — whether they’ve received a letter from their sponsor or not — every couple of months.

The process is then reversed. Letters are carried to coalition points, mailed to the national offices, translated and then scanned and sent back to Compassion USA to be sent to you.

And that’s what happens when you send a letter to the child you sponsor.

I hope this gives you some insight into just how many people are involved in making sure your sponsored child receives your loving words of encouragement. Each one of them is honored to do it. And each one of them is also 100% dedicated to seeing your sponsored child reach his or her full potential in Christ. So keep sending your letters cheering them on! Perhaps now is as good a time as any to write your next letter to the child you sponsor.

Kick off this amazing journey right now — send a letter to the child you sponsor! 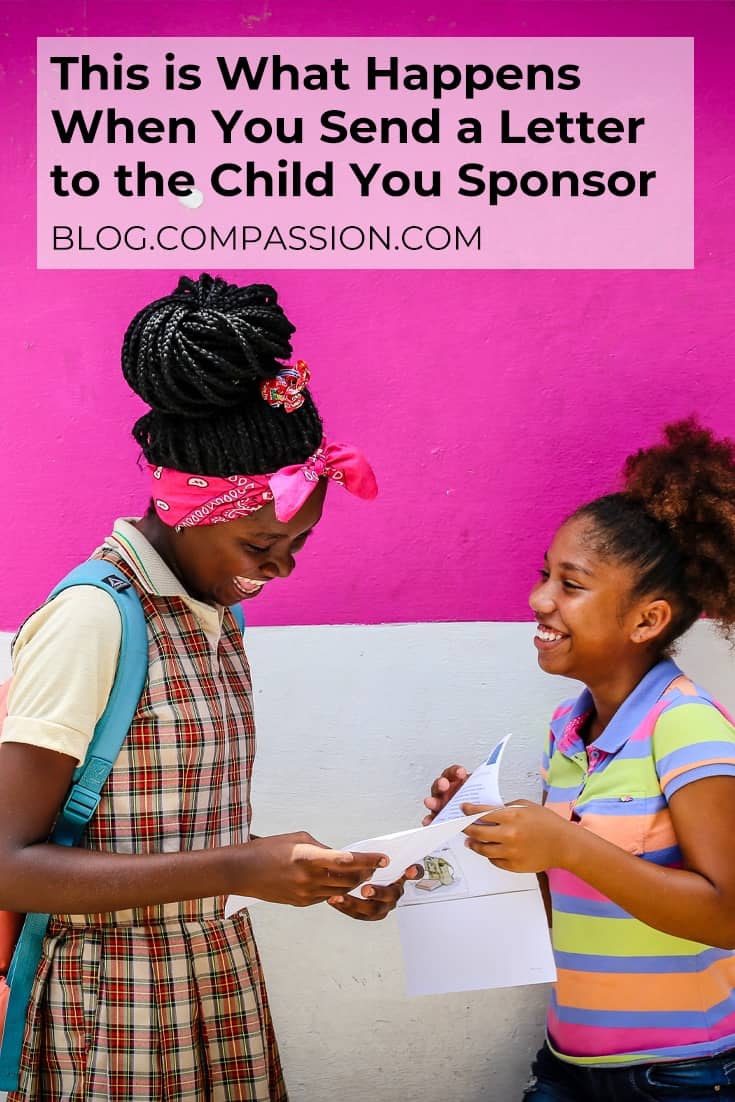 Prev Post:Put Food on the Table by Not Leaving Money on the TableNext Post:Facts About Sri Lanka: Pearl of the Indian Ocean