Facts About Sri Lanka: Pearl of the Indian Ocean

Sri Lanka is a beautiful island nation off the southeast coast of India. Over time, Sri Lanka has acquired many nicknames that reflect its sublime landscapes and rich cultural heritage. Among them: Pearl of the Indian Ocean, Teardrop of India, Resplendent Isle and the Land of Serendipity. From untouched beaches, precious gemstones and incredible wildlife to folklore, timeless ruins and deeply religious customs, Sri Lanka holds many little-known wonders. Although Sri Lanka is a middle-income country with a high literacy rate, there are regions that suffer from poverty and life-threatening starvation and malnutrition.

We’d love to share more about this fascinating country with you! Here are some interesting facts about Sri Lanka that will help you gain a deeper understanding of the culture and traditions in a country that is home to over 10,000 Compassion-assisted children.

Here are some quick, interesting facts you should know about Sri Lanka.

Culture and Traditions of Sri Lanka

Sri Lanka is home to great cultural diversity, art, architecture and religion. Here’s just a little bit more about the Teardrop of India.

Religion: Generally, religious affiliation in Sri Lanka is determined by one’s ethnic and language group. Three primary ethic groups exist — Sinhalese, Tamil and Muslim. More than 90% of the Sinhalese are Buddhists, while the majority of Tamil are Hindu. A minority of Tamil are Muslim, and about 7% from various ethnic groups identify as Roman Catholic or Christian.

Clothing: Traditional dress in Sri Lanka was developed from a mix of cultural influences and handed down from past generations. The styles Sri Lankans wear also indicate their age, marital status and socioeconomic situation. Women typically wear saris — a length of cloth carefully draped to form a blouse and skirt. The saris are often made from bright, colorful fabrics and may be intricately embroidered. Men typically wear sarongs — a long printed piece of clothing that wraps around the body and ties in the front. The cloth material and tying style vary by region and climate.

General Culture: Sri Lankans are warm, friendly people, but if you ask a Sri Lankan shopkeeper a question, you may be confused by their yes and no. In most cultures, a nodding head shows consent while a shaking head means a negative response. However, in Sri Lanka, shaking the head side to side indicates agreement. Popular pastimes in the country include cricket, volleyball, rugby and bike racing. There are many Sri Lankan festivals, one of which is known as “Esala Perahera” (Festival of the Tooth). Every summer, a sacred tooth relic of Buddha preserved in the Temple of the Tooth in Kandy is celebrated over 15 days, culminating in a great parade with over 1,000 performers and 100 costumed elephants!

Music and Dance of Sri Lanka

Mesmerizing dances and enchanting music are both found on the island of Sri Lanka. Ancient folk heritage, Buddhist traditions, European colonization and modern influences have all combined to form a unique cultural and artistic scene.

Sri Lankan folk music is rhythmic and harmonious. The “gata bera” and the “yak bera” are two favorite Sri Lankan drums and are played with both hands. Another memorable instrument is the “hak gedia” — a horn made from a conch shell. Used to beat complex rhythms for dances, the “thalampata” is an indispensable cymbal in Sri Lanka.

The Kandyan dance of the hill country is performed to drumming and singing narration. It is also considered the national dance of Sri Lanka. The Pahatha Rata Natum dance is performed by the people of Sri Lanka’s low southern plains. It is also called the “Devil Dance” because it was traditionally performed in ceremonies to ward off evil spirits, which were believed to cause sickness. The Sabaragamuwa dance style was created to honor the god of Saman and includes 32 main styles.

Food and Drink of Sri Lanka

Although not well-known around the world, Sri Lankan cuisine is flavorful, delicious and unique from its more famous neighbors India and Thailand. The island’s fertile soil produces a vast array of herbs, spices, vegetables, rice and fruits, while the rich coastline offers amazing seafood. Rice and curry are staples in the Sri Lankan diet — frequently flavored with coconut.

Dhal curry (lentil curry) is perhaps the most basic and common of Sri Lankan curries. Lentils, tomato paste, cumin and other spices are the primary ingredients of this dish. In contrast to Indian curries made with dairy, Sri Lankan dhal curry uses coconut milk, making it a lighter, vegan-friendly meal.

Sour fish curry is a beloved dish in Sri Lanka and is made from the firmest white-fleshed fish available, often tuna. The curry may be seasoned with black pepper, cinnamon, turmeric, garlic, pandan leaves, curry leaves and coconut. One key ingredient is dried “goraka” — a small tropical fruit that adds the essential sour flavor.

Athirasa is a delicious Sri Lankan pastry made from rice flour, roasted rice, coconut treacle, coconut oil, and cardamom. This sweet treat is often enjoyed at festivals and holidays!

Lassi is a popular South Asian drink made from yogurt and flavored with a variety of fruit or spices. This beverage can be made sweet, salty, spicy or savory. Learn to make a classic mango lassi drink!

A Story From Sri Lanka: Trampled by and Elephant But Now Running a Store

“It was a freak accident,” remembers Jayakodi, a hardworking father from Sri Lanka. “We live near a farm that attracts elephants and the farmers here are always on alert. It is easy to see the giant animals approaching, but what happened to me took place in the evening. I didn’t see the elephant charging towards me.”

Jayakodi almost died that night, but by the grace of God he only suffered injuries to his left leg. However, those injuries were severe enough to prevent him from returning to his trade as a furniture-maker.

Jayakodi’s daughter, Dilakshi, is registered in the Compassion program. When the church heard of Jayakodi’s accident, they knew the family would need support. Using the Compassion’s Complementary Interventions Fund, the child development center helped with additional hospital fees, medicines and other ensuing expenses.

After Jayakodi had recuperated, he was again able to work with his hands but unable to stand for very long. The child development center helped put up a shop for Jayakodi so he could start his own furniture business. They then organized a workshop in which Jayakodi taught the mothers of beneficiaries how to make handicrafts and small pieces of furniture, all of which Jayakodi helped sell in his store.

Three years later, the mothers are still making wooden crafts and furniture, and Jayakodi makes his living by marketing the products in his shop.

Sri Lanka has not only a deep cultural heritage but a biological one too! The oldest tree known to have been planted by a human rather than by natural seeding stands in Anuradhapura, Sri Lanka. This sacred fig or “bo-tree” (Ficus religiosa) was planted in 288 B.C., making it over 2,300 years old.

Photos of What Daily Life is Like in Sri Lanka

Do you want to keep learning about the beautiful country of Sri Lanka?

Facts About Compassion and Sri Lanka › 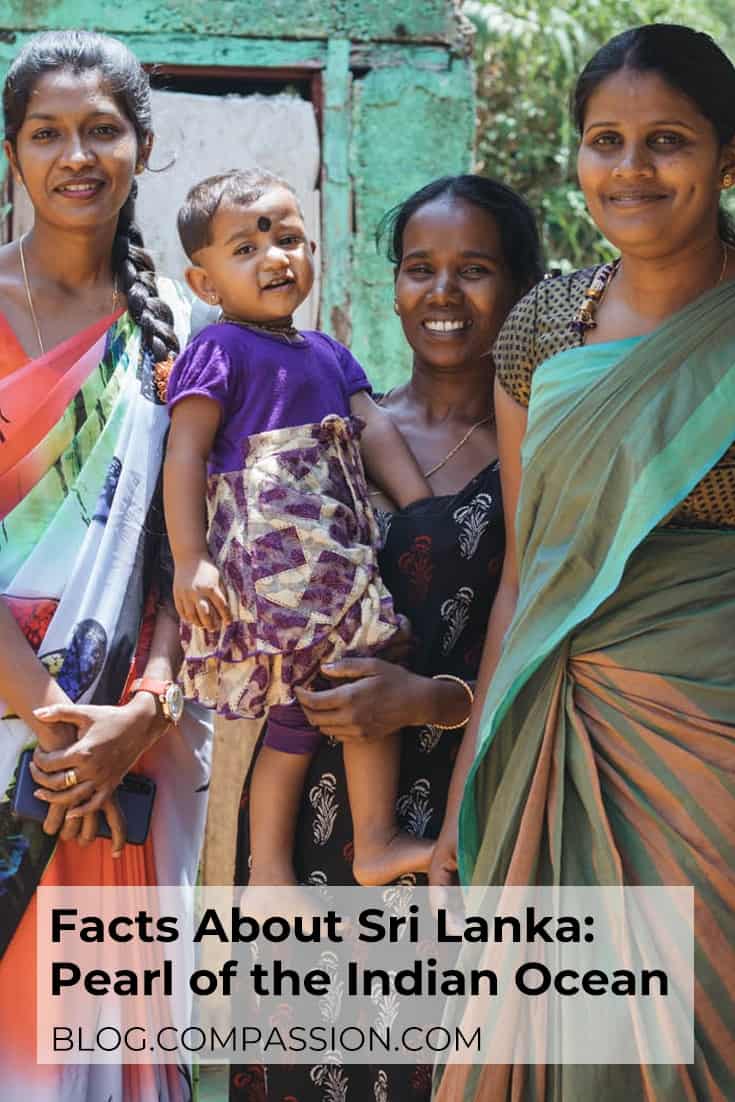 Prev Post:This is What Happens When You Send a Letter to the Child You SponsorNext Post:Top 10 Reasons These Kids in Poverty Love Christmas