Facts About Uganda: The Pearl of Africa

If Uganda isn’t already on your bucket list of travel destinations, it definitely should be. While you’re there, you can walk through the streets of the beautiful and bustling capital city of Kampala. You can adventure through Bwindi Impenetrable National Park, whose thick, green canopies truly allow the park to live up to its name. You can see elephants, lions, giraffes and gorillas from the back of a safari vehicle. And best of all, you can meet the beautiful people who make up this pearl of a country.

While you’re in Uganda, you will also see the reality of poverty that the country continues to face. To this day, Uganda struggles with extreme poverty, child malnutrition, poor sanitation, access to electricity and education completion. But, despite the challenges it faces, Uganda has made great progress and has so much hope and goodness to share with the world. That’s why we’d like to share some fun facts about Uganda with you today. As you read this blog, may you be filled with hope and an even more profound understanding of what life is like for the nearly 126,000 Compassion-assisted children who live there.

Here are some quick, interesting facts you should know about Uganda.

Culture and Traditions of Uganda

Some of the most fun facts about Uganda center on the country’s culture and traditions. Uganda is home to many ethnic groups and dozens of different languages, making its culture both interesting and diverse. It’s also a nation filled with religious history, colorful clothes and close family ties. Let’s jump in!

Religion: While Uganda is a predominantly Christian nation, the country’s constitution provides for religious freedom. Currently, 45.1% of the population identifies as Protestant, 39.3% as Catholic and 13.7% as Muslim. The rest of its people either practice an Indigenous religion or are not religious. Islam was the first outside religion to be brought into Uganda. Then, during the colonial period, Protestantism and Catholicism were brought into the country by missionaries. Rivalry, and at times hostility, has been sharper between Protestants and Catholics than it has been between Christians and Muslims.

Clothing: Ugandan clothing is representative of the country’s population — it’s diverse. If you visit Uganda, you’ll see lots of different styles represented. Wealthier people tend to dress in modern Western fashion while other less-affluent people often dress more traditionally. The “kanzu” is a traditional item of clothing for men. It’s a long tunic that’s often white or cream in color. It was originally brought to Buganda, a kingdom presently located in southern Uganda, by Arab traders in the 19th century. However, now men all over the country wear kanzus. For women, the most famous traditional clothing item is called a “gomesi.” A gomesi is a long dress that has triangular shoulder pads, a square net and a cloth hanging from one hip. While women all across Uganda wear gomesis, they also originated among the Baganda and Basoga people.

General culture: Uganda is made up of many different ethnic groups that influence the culture. The largest group is the Baganda (the people of Buganda, also called the Ganda), which makes up 17% of the population. They mostly live in the southern part of the country. Historically, the country has struggled with ethnic divisions. But today, relations between the different groups are relatively harmonious. There are common interests, like football (soccer) and cricket, and common values, like the importance of family and lineage.

Music and Dance of Uganda

With the many different ethnic groups and languages found in Uganda comes a variety of musical traditions and preferences. There are so many different traditions that we could write a whole blog post about them! So, we’ll just start by sharing a couple of Uganda’s most famous music and dance customs today.

“Ekitaguriro” is the main traditional style of music in western Uganda. It originates from the Banyankore people. The main instruments used in ekitaguriro are the “omukuri” (flute) and the “engoma” (drum). The ekitaguriro music and dance honor the longhorn cattle found in this region. It is danced by both women and men. The dancers follow the beat of the drum, mimicking the foot sounds, rhythms and movements of the beloved cattle.

In central Uganda, which is mostly inhabited by Baganda people, common musical instruments include the “ngalabi” (a long, round drum), the “endongo” (a harp-like instrument) and the “adungukadigindi” (a fiddle). “Baakisimba” is one of the dances performed in this region. The dance mimics the drunken movements of the king who ruled the Buganda region in the early 1800s. At the time, referring to a king as “drunk” was taboo, so people simply said he was “happy” and began mimicking his swaying movements. The tradition still holds, and the Baganda people still dance the baakisimba today.

Food and Drink of Uganda

The food and drink of Uganda is simply delicious. Most Ugandan people only eat two meals each day: lunch and dinner. It’s not uncommon for breakfast to be only a cup of tea or porridge. Food staples include bananas or plantains, millet, cassava, sweet potatoes, chicken and beef and more. Many of these ingredients you’ll find in the popular food and drinks listed below.

Matooke is a traditional Ugandan dish. Many Ugandans eat it every day. Matooke is not only the name of the green banana but also of a savory dish. The dish is made by peeling the green bananas, which haven’t yet become sweet, and cooking them in water or steaming them in banana leaves. It’s a little bit like mashed potatoes, just made with bananas! Learn how to make your own matooke with peanut sauce today!

Luwombo is another popular, traditional dish made in Uganda. It is a stew-like meal made of meat (such as chicken, beef or fish) that is soaked in peanut sauce. Sometimes vegetables like mushrooms, potatoes or carrots are added. Then, the ingredients are wrapped up in banana leaves and steamed for hours. Often, luwombo is served with matooke!

Mandazi is a yummy treat that Ugandans — and many other Africans — love to eat. Essentially, it’s an African doughnut. It is fried bread that is often sweetened with coconut milk and shaped into triangles or circles. Sometimes cinnamon and sugar are added to make them extra tasty. You can eat them by themselves or dip them in tea or juice. Sounds yummy, right? Learn how to make your own mandazi!

Tea is not only one of the Uganda’s most important agricultural products and exports, but it’s also a popular drink! However, when ordering a cup of tea in Uganda, just know that it often comes spiced. Ginger tea is particularly popular!

A Story From Uganda

Margaret* was heartbroken when she learned that her daughter Rita* was HIV-positive. The devastating news was yet another blow to the single mother. Over the years she had endured the deaths of two husbands, her parents and her four siblings. She felt bitter and wondered if God had abandoned her.

But Margaret didn’t realize that her life was about to completely change, all because of her daughter …

Before Rita received an HIV diagnosis, she had registered in her local Compassion program. At her child development center, she learned about Jesus and accepted him as her Savior.

So, as her mother spiraled into a depression after her daughter’s diagnosis, Rita’s faith continued to grow because of her decision to follow Jesus. She inspired everyone around her, including her mother. And thanks to her persistent love for God, Rita led her mother to give her life to Christ too.

“I wanted to have the kind of peace she had,” says Margaret. “Therefore, in June 2019, I publicly confessed Jesus Christ as my Lord.”

So today, even though Margaret and Rita have HIV, they are filled with hope.

“I feel better because of the hope arising in me,” says Margaret. “I want to persevere through all kinds of situations, trusting God and knowing that it is only God that I can hold on to. I want to use my little strength to mother Rita to usher her to the future that God has prepared her for.”

What a beautiful reminder that no matter how young you are, you can further the kingdom of heaven.

*Names were changed to protect their identities

Uganda is home to one of the smallest church buildings in the world. It’s located on Biku Hill in western Uganda. It is only about 8 feet tall and 8 feet wide. It can fit only three people, including the pastor, and is often used for prayer and meditation.

Photos of What Daily Life is Like in Uganda

Do you want to keep learning about the beautiful country of Uganda?

Facts About Compassion and Uganda › 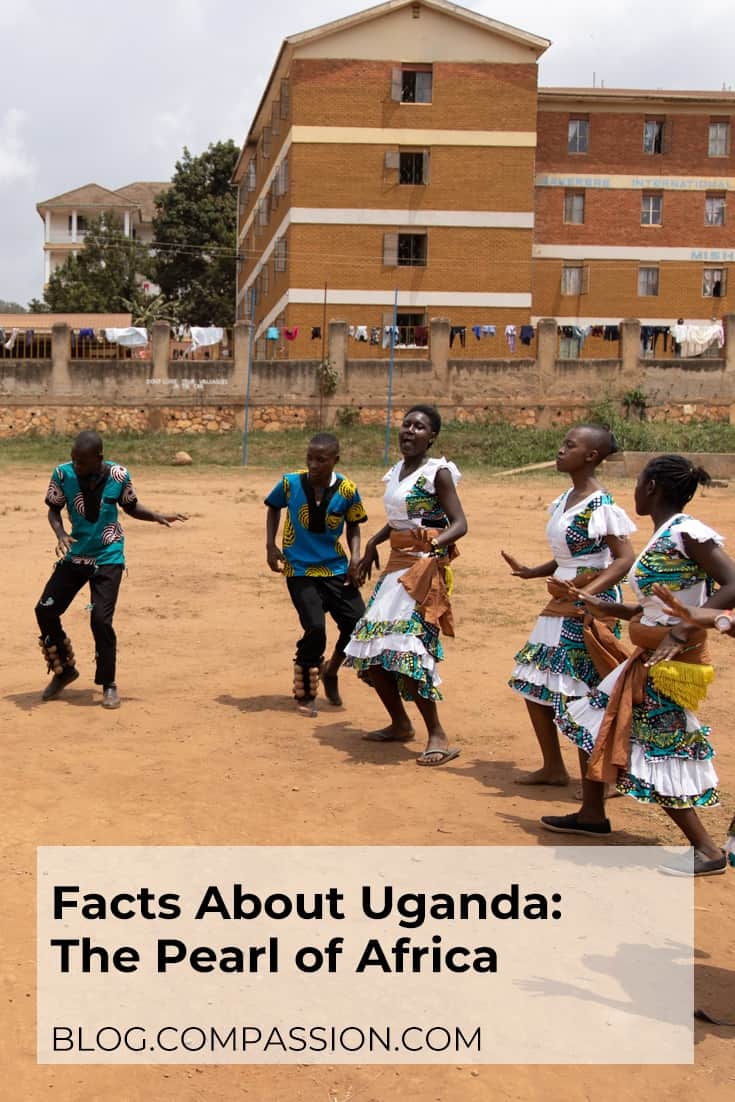 This is the final article in our blog series featuring facts about countries where sponsored children live. Read all of them here!

Prev Post:How These Sponsors Raised $120,000 for Children in PovertyNext Post:3 Public Speaking Tips That Improved My Letters to My Sponsored Child