How to Raise Brave Kids in a World Keeping Them Afraid

If you were to ask my brother about our childhood he would jokingly tell you that we were raised by wolves. My parents let us take risks and have adventures. In fact, their favorite thing to say to us on a Saturday morning was, “Go outside and have an adventure and don’t come back until you do.” They wanted nothing more than to teach us how to be brave. 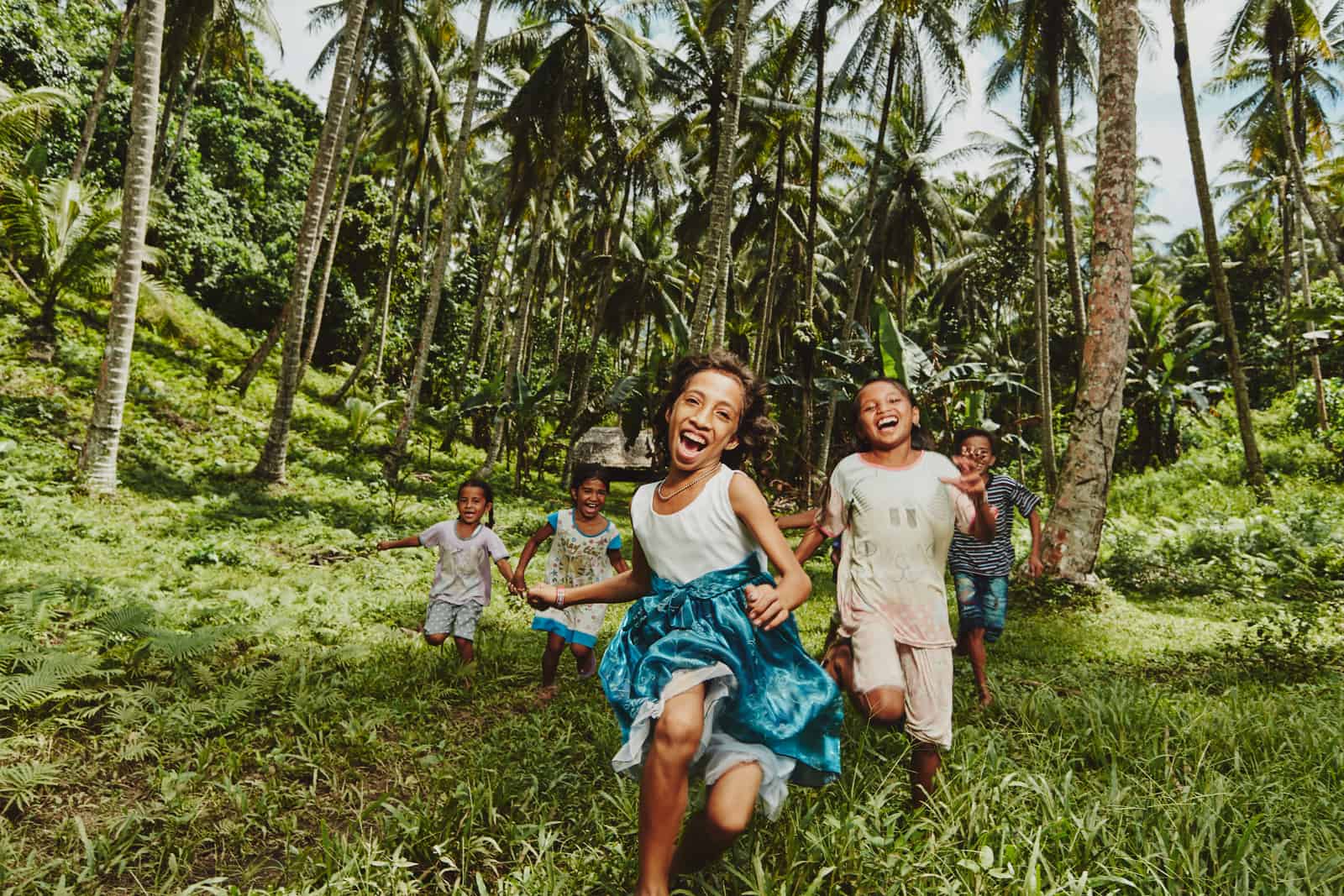 Putri and her friends racing through the palm trees in Indonesia.

Parenting in our generation is so different, isn’t it? I don’t know whether it is an intense need for control or the fact that we are surrounded by voices who are trying to convince us we aren’t safe. Whatever the cause, we parent with the brakes on.

This has become even more evident to me when I take my kids to the playground. This past year, I have begun to listen to the narratives we speak over our kids as they play, and the astonishing thing is that no matter what playground I am at I hear the same three phrases: “Slow down,” “Climb down” and “Be careful.”

We are raising kids who are afraid, and I can’t help but wonder if this is contributing to the skyrocketing rates of anxiety and depression in young kids.

What is the solution?

For the past three years, I have been researching what it takes to raise kids who flourish into adulthood. The results of my study have been both enlightening and surprising. In fact, some of my findings were so prosaic I didn’t want to believe they were true.

So here it is, a list of the top four ways to raise brave kids in a world that wants to keep them timid and afraid.

1. Let them use knives and start fires. 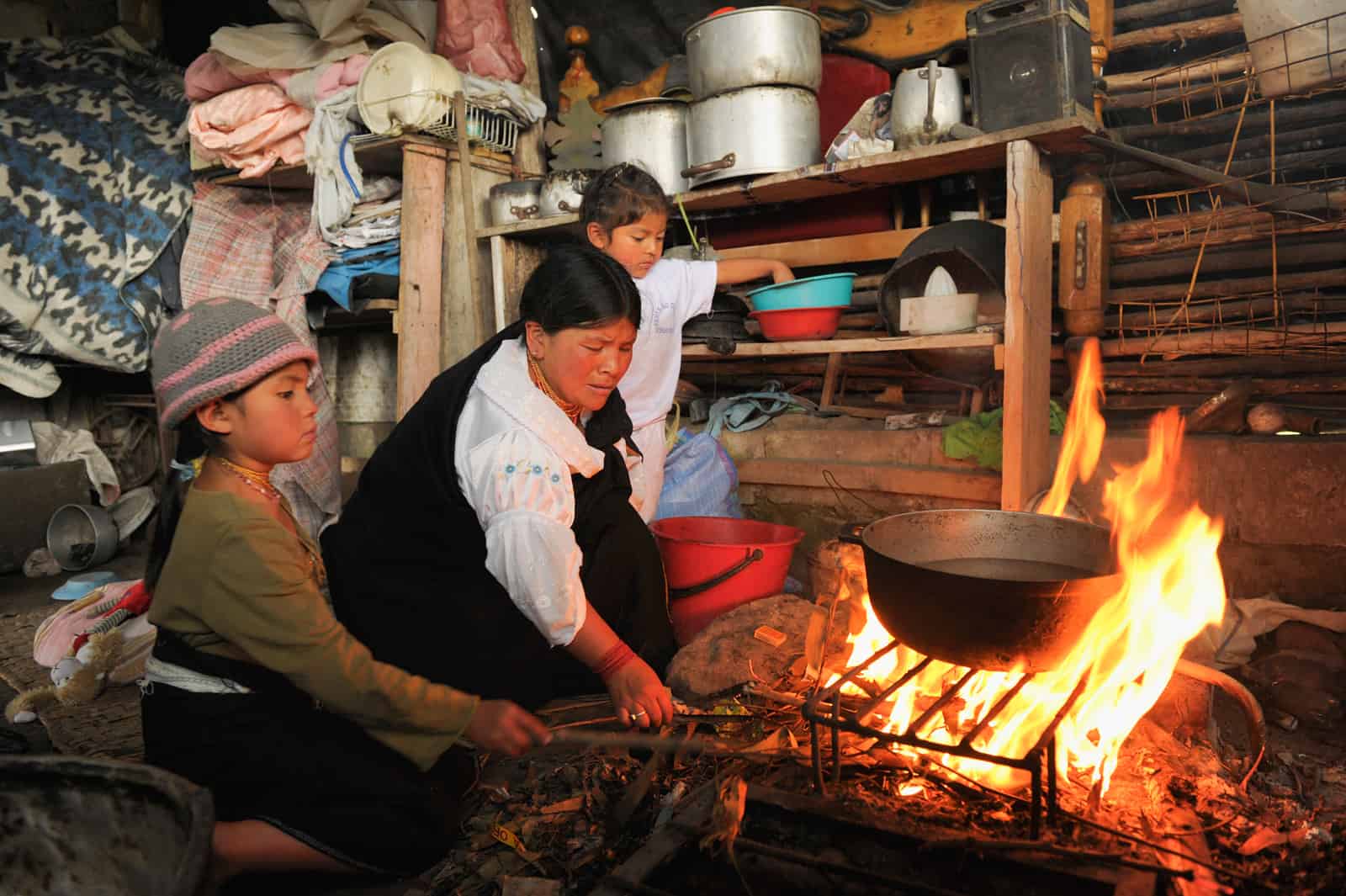 Shirley and her brother Lenin helping their mother Maria cook in Ecuador.

Kids who are comfortable with dangerous items aren’t fascinated by them.

I learned this firsthand watching a group of third-graders on a camping trip. It became obvious which kids had exposure to dangerous items at home and whose parents had taught them the right ways to interact with sharp or hot necessities.

What I have learned in my research is that kids are way more capable than we give them credit for.

Which is why when my kids were little I would let them chop vegetables for dinner with sharp knives with me standing right next to them. Or my husband Joe would teach them how to start and extinguish a fire. Because the truth is you don’t know about fire until you have started a fire and cooked something over it, and felt the heat and then put it out.

When kids feel encouraged to use tools and fire in constructive ways they aren’t curious about them and they don’t feel the need to experiment with them. Be the person to teach your kids about dangerous things, and they will be wise and brave as they interact with those things when you aren’t around. 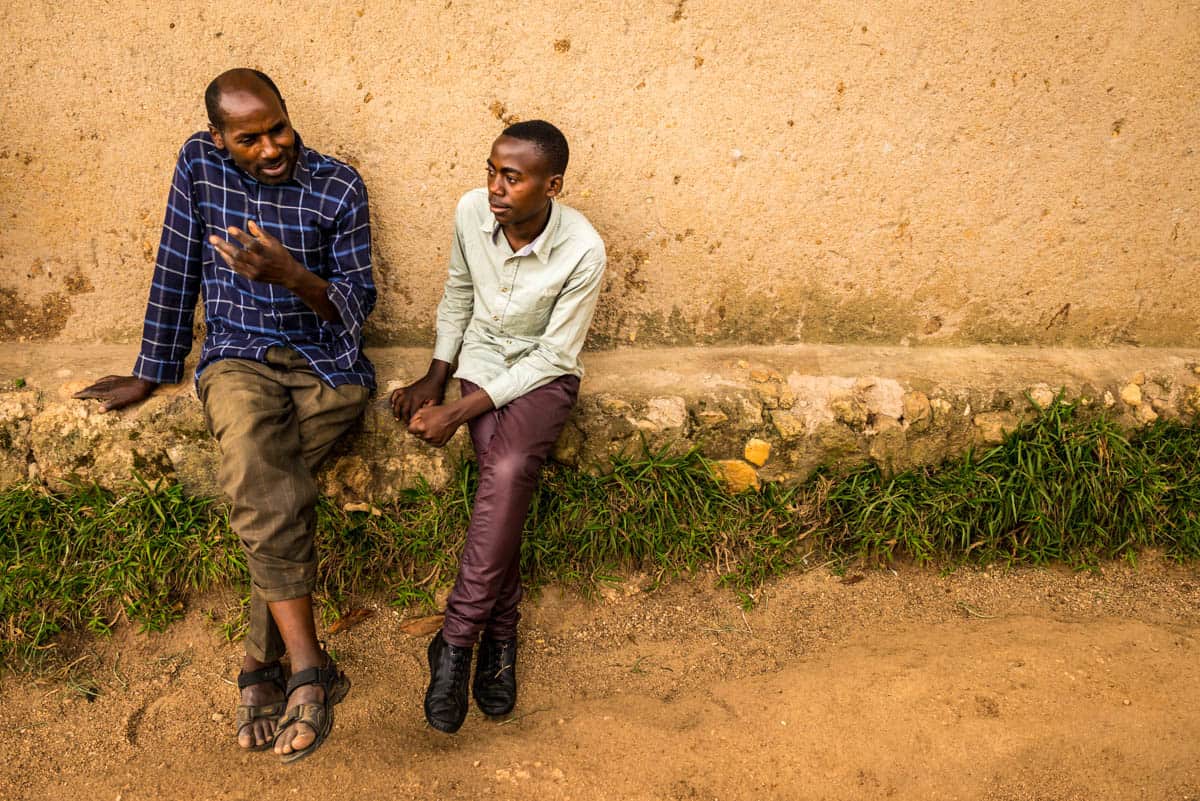 Jean and his father sitting outside their home in Rwanda talking.

I am a big believer that one of the primary jobs of parenting is to tell our kids who they are. This doesn’t mean what they are going to do as a profession or putting labels on them that constrict their choices in the future. I am talking about speaking words of love, encouragement and bravery over them.

This means that when my girls are fighting about whose turn it is on the swing in our front yard, I go out and instead of telling them they are acting selfish and to change it, I will remind them who they are.

“Ellie, you are generous and Charlotte, you are a good friend.”

When I do this, it reinforces behavior I want to see rather than behavior I don’t.

The most powerful gift we give to kids is our words, and a parental blessing is both holy and powerful. Each day take a moment to remind your kids who they are and speak over them good things they are becoming. Even if they aren’t true at the moment, I am convinced that if you tell a child she is brave it helps her to become so.

My family loves the opportunity we have to encourage the children we sponsor in this way. These children who have been fed the lies that poverty has told them – that they are worthless, that they will never be more than their circumstances – get to hear the truth of who they really are in our letters. We want to instill courage and bravery in them. The power of the words we pen in those letters is greater than we could ever imagine!

3. Become OK being embarrassed by them. 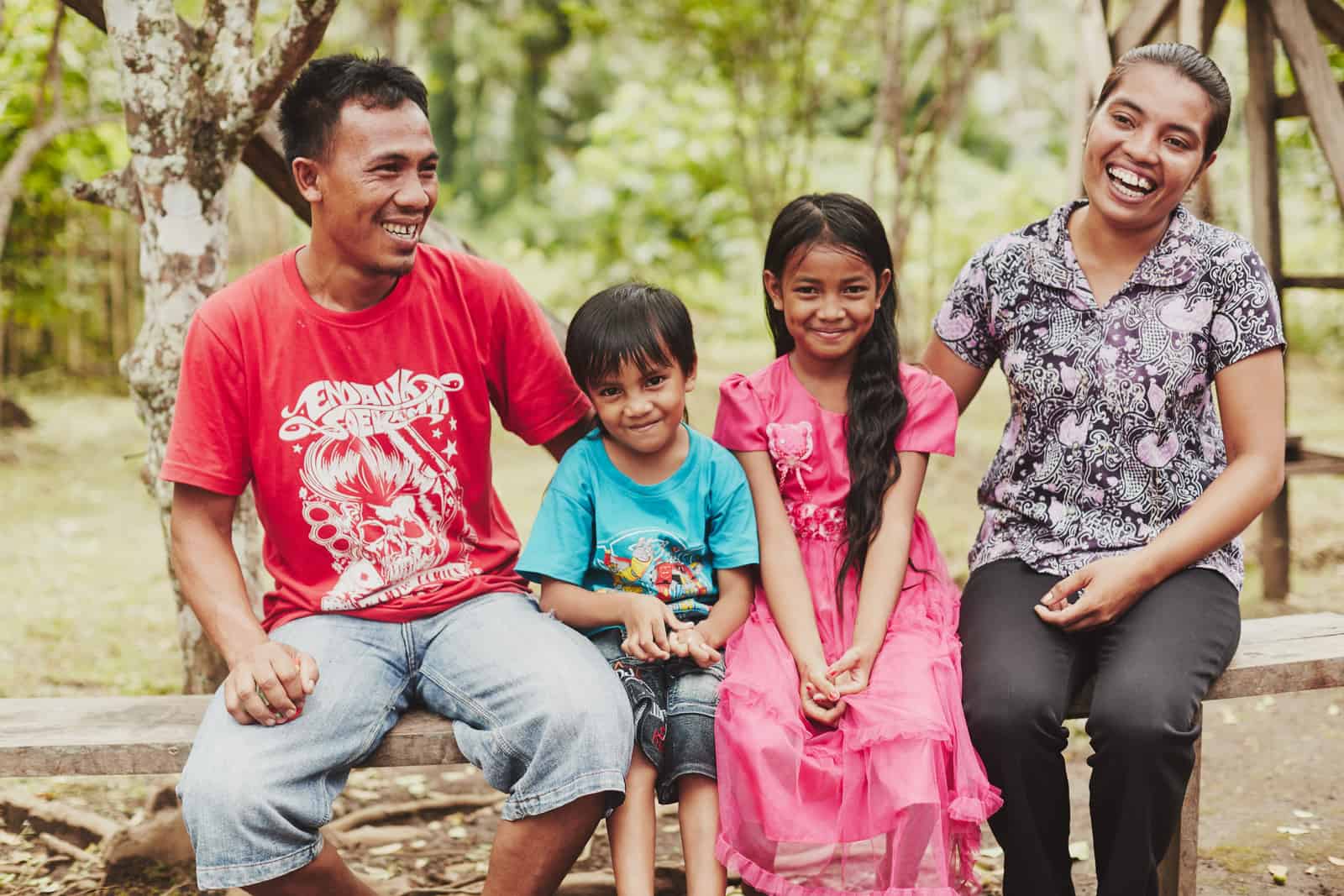 Maria, Secretary at a Compassion Child Development Center in Indonesia, enjoying a laugh with her husband and two kids.

Here is the deal, we all want to raise kids who are self-assured, brave, can stand up to bullies and have developed their own opinions by the time they leave for college. The thing is, those qualities we want our kids to have at 18 are really difficult to parent in a 2-year-old.

Too often we parent for “good” behavior at 2 and then at 18 expect our kids to suddenly regain their feistiness when they leave our home (the feistiness that will make them brave adults).

How to raise brave kids? What I am learning is that raising brave kids to have qualities of courage that I hope flourish into adulthood means being okay with being embarrassed by them occasionally. It means they won’t sit still at convenient times and they might have an opinion that is different than mine, and that is good.

Because my job is to raise confident adults, not compliant children.

See, that questioning 5-year-old is going to be an awesome lawyer someday and the kid who keeps getting sent to the principal’s office for fighting will someday fight for injustice mustering all the courage and bravery in the world. Our job as parents is to teach them grit, to help them harness their powers for good and encourage them as they use their voices.

4. Have family dinner together. 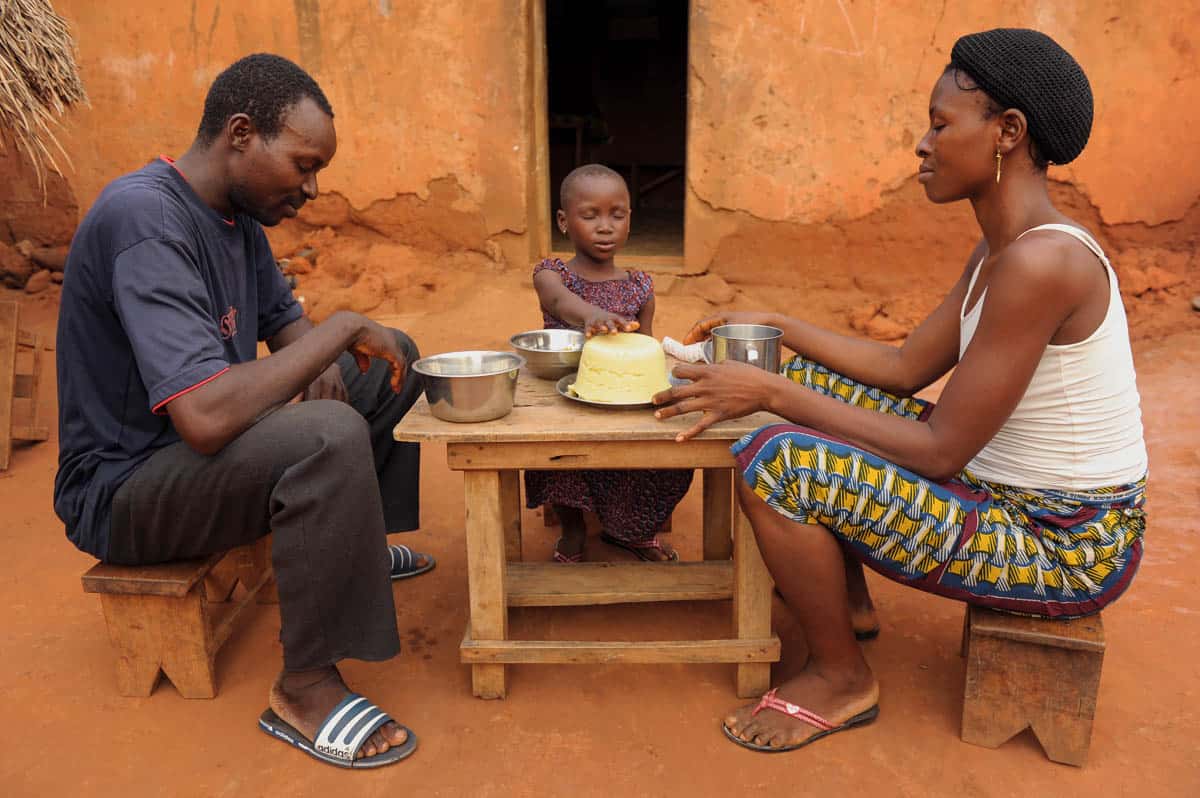 Little Ruth and her parents praying for their meal together in Togo.

OK, this is the one I least wanted to be true, but without fail it ranked at the top of every single piece of research on parenting I studied. Families who have dinner around a table four or more times a week raise kids who are exponentially more resilient, happy, well-adjusted and confident.

It is staggering the impact a meal around a table can have. In our family, it means saying no to some after-school activities in order to make this a priority. Sometimes the conversation turns into kids bickering, but on the whole, this is so staggeringly important we have placed it at the top of our raising brave kids’ priorities.

So pull up a chair and make eye contact around a meal because research says it just might change your kid’s life.

We live in a beautiful and diverse world that is waiting for us to be brave enough to really live in it. To see the hurting parts and offer a healing touch, to jump in deep water with courage and feel deeply all the goodness and also the delicate and difficult.

So, may we be brave parents who offer our kids the world, but may we start around a dinner table.

This article was originally published August 22, 2017. 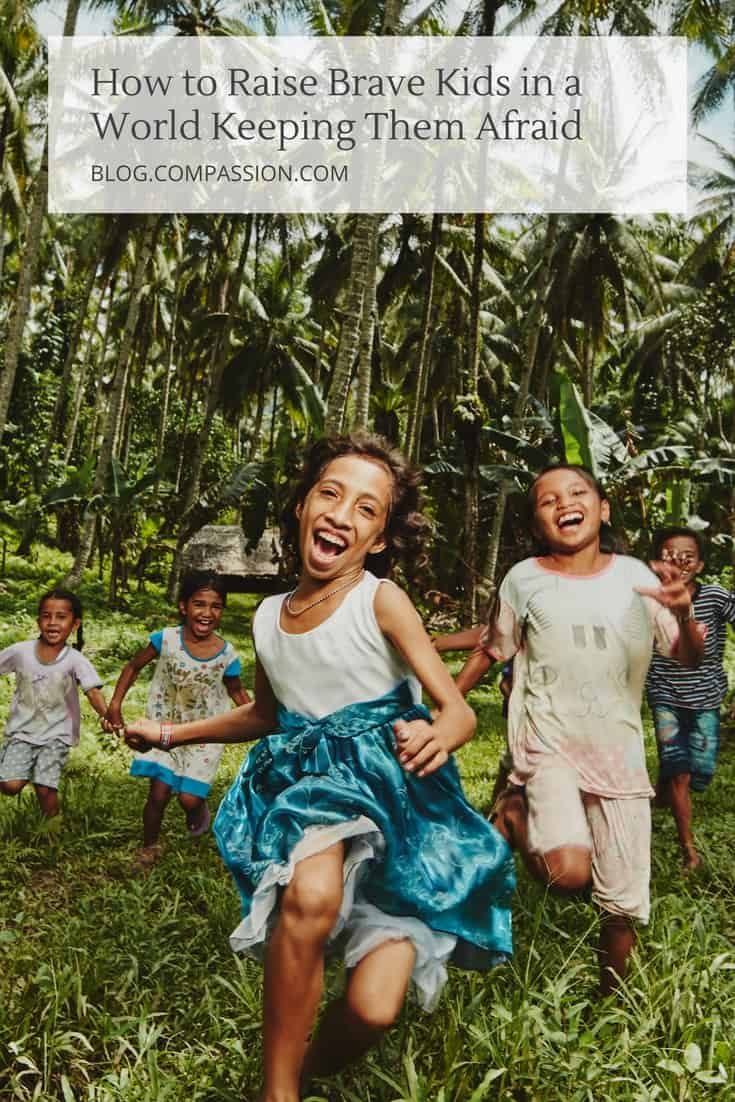 Mandy is the President and CEO of MOPS International, and is widely known for her unique takes on parenting, relationships, spiritual, and cultural issues. Through MOPS, Mandy serves as the voice of one of the most influential parenting organizations in the U.S. and around the world. Her debut book Starry-Eyed: Seeing Grace in the Unfolding Constellation of Life and Motherhood was released on August 30, 2016.

Prev Post:NFL’s Nate Solder: This Is Why I Play FootballNext Post:Trapped Inside for 8 Years, Sabina Is Now Free