Guatemala is home to a gorgeous Caribbean coast, the ancient Mayan citadel of Tikal, majestic mountains, history and heritage. It boasts of warm temperatures year-round (hence its nickname “Land of Eternal Spring”) and jaw-dropping nature in every corner. If you traveled throughout this stunning country, you might see the colorful quetzal (Guatemalan national bird), swim in Lake Atitlán, or climb the volcano of Tajumulco — the highest mountain in Central America at 13,845 feet. However, beyond the tourist attractions are extreme poverty, cruel discrimination, food insecurity and the memory of a brutal civil war. Despite these hardships, you will also find beautiful people, vibrant cultures and abundant hope! And that’s why today we’d like to share some interesting facts about Guatemala with you. They will give you an even richer understanding of the country and what life is like for the tens of thousands of precious Compassion-sponsored children who live there.

Here are some quick, key facts you should know about Guatemala.

Culture and Traditions of Guatemala

Some of the most interesting facts about Guatemala are found within the country’s cultures and traditions. One theme you’ll find while learning about Guatemala and its culture is how the country is still strongly influenced by the Indigenous Mayan community. Let’s take a look at what that actually means …

Religion: A large majority of Guatemalan people are practicing Catholics or Protestants. Catholicism has been practiced in Guatemala since colonial days, but the rise of Protestantism has been more recent — in the last 50 years. While most Guatemalans identify as Catholic or Protestant, Indigenous Mayan spirituality also influences the religious practices in the country, particularly in the highlands. Many of these modern-day Mayan practices, known as “costumbre,” are practiced in caves, at archeological sites or on mountaintops. They often involve offerings of candles, flowers, liquor or small animals like chickens.

Clothing: If you were walking around Guatemala City right now, you’d see a lot of people dressed like you — jeans, T-shirts, sneakers, etc. However, you would also see some women dressed in traditional colorful skirts and dresses with intricate designs known as “trajes” — clothing that you would see even more frequently in the highlands. Traditional Guatemalan women’s clothing is known as some of the most colorful in Latin America. There are many different designs and styles to these trajes, and each village has its own distinctive pattern. It’s possible to identify where a Guatemalan woman is from simply based on what she is wearing!

General culture: One of the most interesting aspects of Guatemalan culture is the extent to which it is still influenced by Mayan culture. In Guatemala, most Indigenous people with Mayan descent live in the highlands. Even though Spanish is the national language, over 20 different languages are spoken across the country, many of which are spoken by different groups of Indigenous people. And while much of Guatemala is modern, Indigenous Guatemalans with Mayan descent live a much more traditional lifestyle.

Music and Dance of Guatemala

Music plays a significant role in Guatemala’s vibrant culture. There are several styles of music in Guatemala, with influences from Mayan tradition, European music and Mexican sounds. Depending on where you are in the country, you could hear anything from American pop, to “ranchera,” to reggae-inspired music.

When discussing Guatemalan music, you can’t leave out the marimba, which is the national instrument of Guatemala. The marimba is made of keys or bars (typically made of wood) that produce sounds when struck with mallets. Essentially, the marimba is a large wooden xylophone! The sound of the marimba is joyful and upbeat. This instrument is especially meaningful to the Indigenous Mayan community in Guatemala.

Not only is the marimba used in celebrations and ceremonies across the country, but it is also used as a symbol of strength and resistance. Even though Mayans make up around 40% of the population of Guatemala, they have faced disproportionate poverty and oppression. For many years, the Indigenous people were kept from playing the instrument. But the instrument was so important to them that they wouldn’t stop playing! So, today the marimba represents both musical culture and the pride and resistance of Indigenous people in Guatemala.

Dance is also an important cultural practice in Guatemala. There are lots of traditional dances, many of which come from the Mayans. One of the most famous of those dances is called “Palo Volador.” It’s based on a Mayan story in which two brothers are turned into monkeys as punishment for trying to kill their two other brothers. To honor the sacred story, two dancers dressed as monkeys hang from ropes on a huge pole and swing slowly to the ground.

Food and Drink of Guatemala

Like much of Guatemalan culture, the country’s cuisine is largely influenced by both the Mayans and the Spanish. Staples of the diet of many Guatemalan people include corn, beans, plantains and cheese. Today we’d like to give you a peek into some of the most popular Guatemalan dishes and drinks.

Pepian is one of the oldest and most popular dishes in Guatemala. It is a thick stew made with meat, fruits and vegetables. Many consider this the national dish of Guatemala. It is especially common in the city of Antigua and can be found both in restaurants and on the carts of street vendors. Pepian is often served with rice and corn tortillas.

Empanadas are delicious stuffed pastries popular throughout Latin America. They can be made with a wide variety of fillings including beef, chicken, cheese, custard, fruit or a combination of these ingredients. Whether served sweet or savory, empanadas make a yummy snack! Learn to make bean and cheese empanadas!

Chiles rellenos (stuffed chiles) is another popular dish in Guatemala. Many Latin American countries have their own versions of chiles rellenos. In Guatemala they are made by stuffing fresh, green peppers (Anaheim, poblano or pasilla) with cheese and meat, covering them with egg batter and frying them. They are often served with tomato sauce.

Limonada con soda is a popular, refreshing drink in Guatemala. And it’s pretty simple to make too. Just mix lemon or lime juice, sugar and club soda. The perfect drink for a hot day!

Rellenitos are one of the many tasty sweet treats made in Guatemala! They are mashed plantains filled with sweetened black beans, fried, and sprinkled with cinnamon and sugar. Rellenitos can be served hot or cold. They’re absolutely delicious!

A Story From Guatemala: Baking for Her Future

Many children living in impoverished communities of Guatemala never finish school. The tragic reality is that most parents cannot afford the fees, leaving them with no choice but to take their children out of school.

This was the story for Coni and her family. Despite Coni’s desire to complete school, her parents were unable to afford the cost of school past eighth grade. But thanks to the grace of God, Coni was enrolled in her local Compassion center.

The staff at Coni’s center started a vocational training program where young people could learn how to bake. The children enrolled in this program not only learned how to bake and run a business, but any profit from the bakery was used to buy new baking supplies AND fund educational scholarships for students whose families couldn’t afford school.

Coni enrolled in this program and was awarded one of the educational scholarships so she could finish secondary school.

After graduating from secondary school and the Compassion program, Coni decided to come back and volunteer to teach younger children how to bake. She is passing on the same skills that she was given through the baking program.

“I like giving classes to the kids so they can learn new skills and have a job for the future, a business, where they may be able to make money to help their families,” Coni says.

Coni has so much hope for the future — for the kids she teaches and for herself!

Guatemalans love football (soccer), but they also are “futsal” players. Futsal is very similar to soccer, but it’s played on a hard court with a small ball. Just picture soccer on a basketball court!

Photos of What Daily Life Is Like in Guatemala

Do you want to keep learning about the beautiful country of Guatemala?

Facts About Compassion and Guatemala › 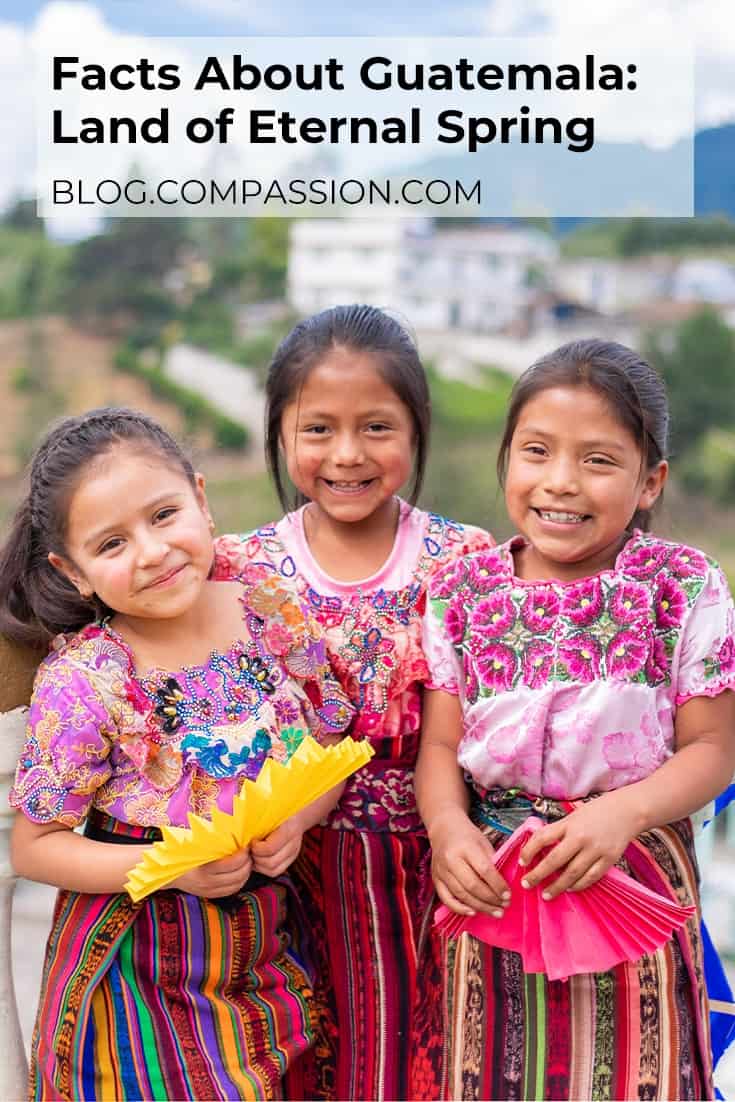