Shakul — the Story Behind the Striking Eyes

When we posted a picture on social media of a little boy with a striking face it became one of our most “liked” photos we’ve ever posted. Four-year-old Shakul from Uganda has Waardenburg syndrome, which affects his pigmentation and hearing. Shakul’s unique beauty seems to have struck a chord, so we wanted to share his incredible story with you. 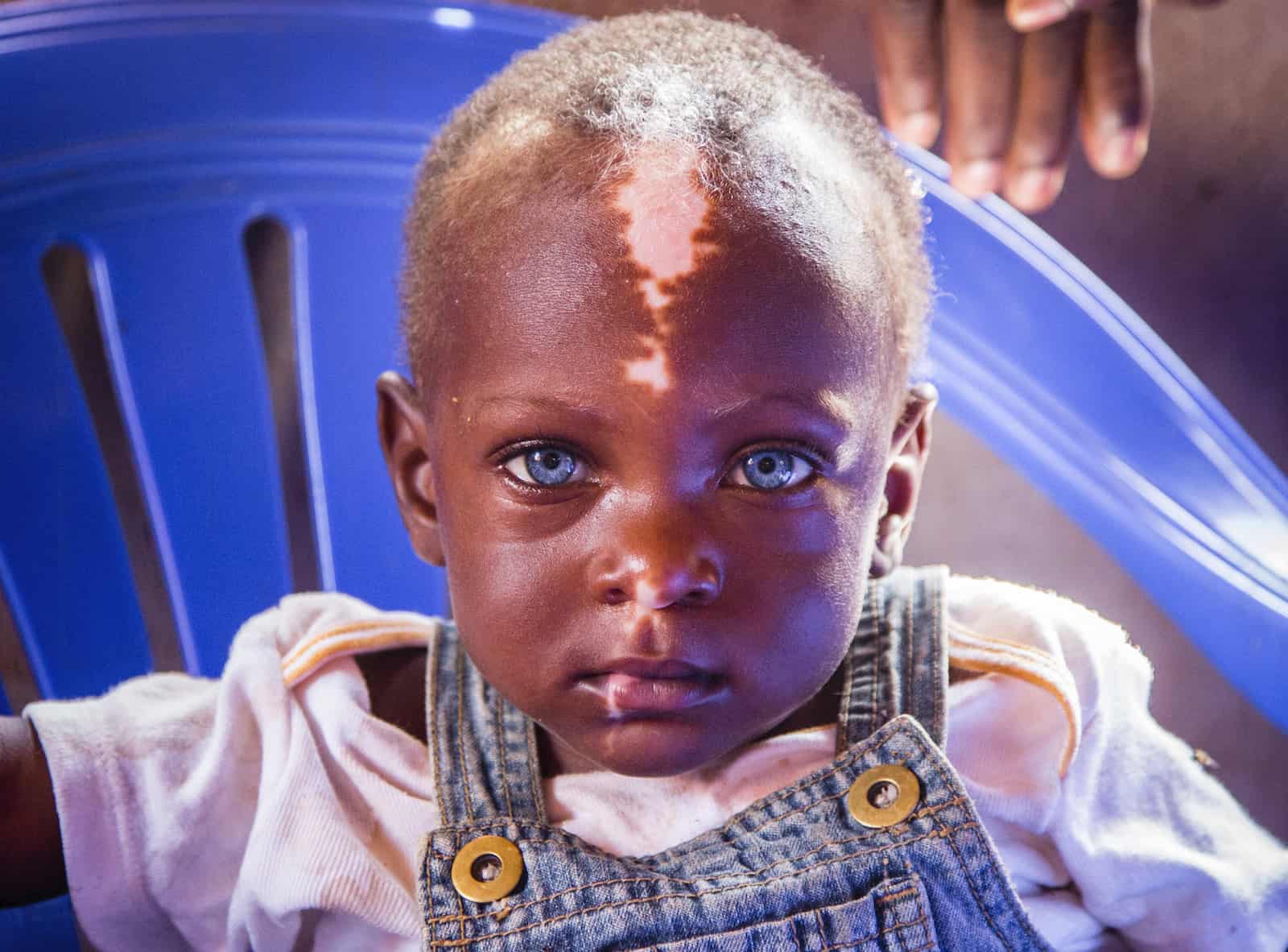 It was past midnight when 60-year-old Namatovu woke to a phone call from her son. She panicked at his news. Life would never be the same again.

“The woman put the baby outside the door. I heard him crying,” her son Sowedi says. “When I opened the door, he lay there completely naked. I didn’t know what to do.”

Sowedi found the 2-month-old baby laying outside his door, cold and helpless. His wide eyes were startlingly blue, a rarity for a Ugandan baby. His face also had striking patches of white. The baby’s mother didn’t understand what was wrong and abandoned Shakul.

But Sowedi also couldn’t care for the baby, so at age 60 Namatovu took him in to raise as her own. At the time, she washed clothes and worked as a part-time cook at the Compassion-assisted Katuso Child Development Center to earn money for her younger son’s school fees. She didn’t have much, but she was determined to care for both boys. 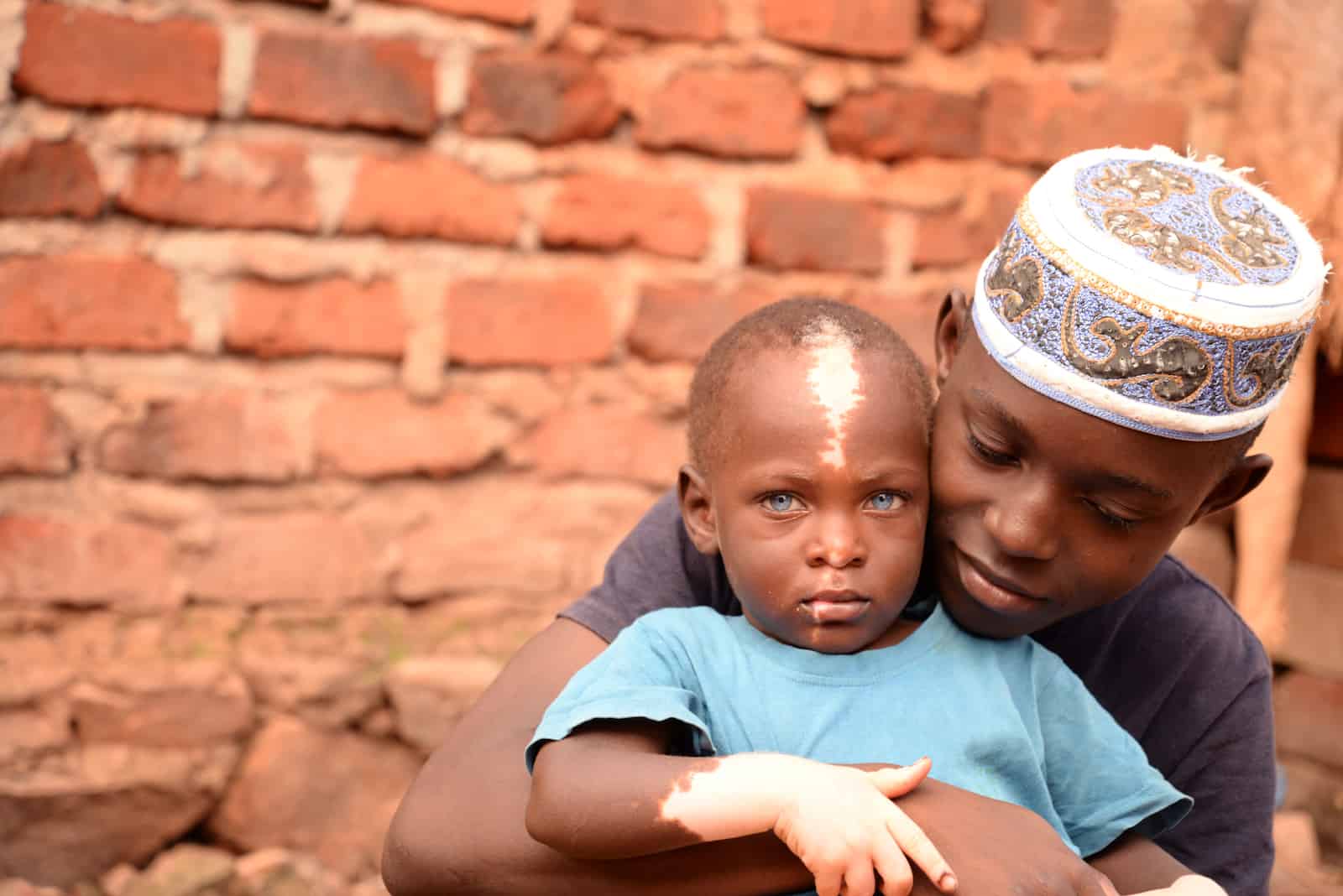 Shakul at age 2 with his loving uncle, Namatovu’s younger son.

This time it was the director at the child development center where she was a cook. She asked Namatovu to come and cook for special guests the following Saturday. The guests were from South Korea visiting the children they sponsor.

On the day of the visit, Namatovu brought Shakul with her as there was no one to take care of him at home. While she was busy in the kitchen cooking her very best delicacies, the group’s trip leader, Matt, saw Shakul and began interacting with him. Matt had such a connection with Shakul that he asked to sponsor him. The church arranged everything, and Matt became Shakul’s sponsor. 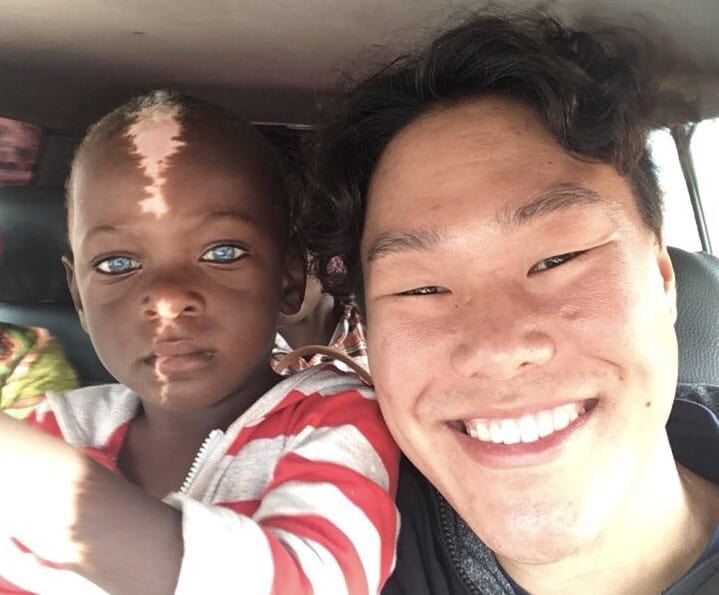 Shakul and his sponsor, Matt

That meant the church had the resources to get Shakul the care he needed, including medical care.

A health checkup revealed Shakul has Waardenburg syndrome, a rare genetic disorder that can cause profound hearing loss and pigmentation changes in the hair, eyes and skin.

In impoverished rural communities, children with disabilities often do not have access to the educational support they need. But thanks to support from his sponsor and Compassion’s local church partner, Shakul is currently enrolled in a special-needs school where he receives support. 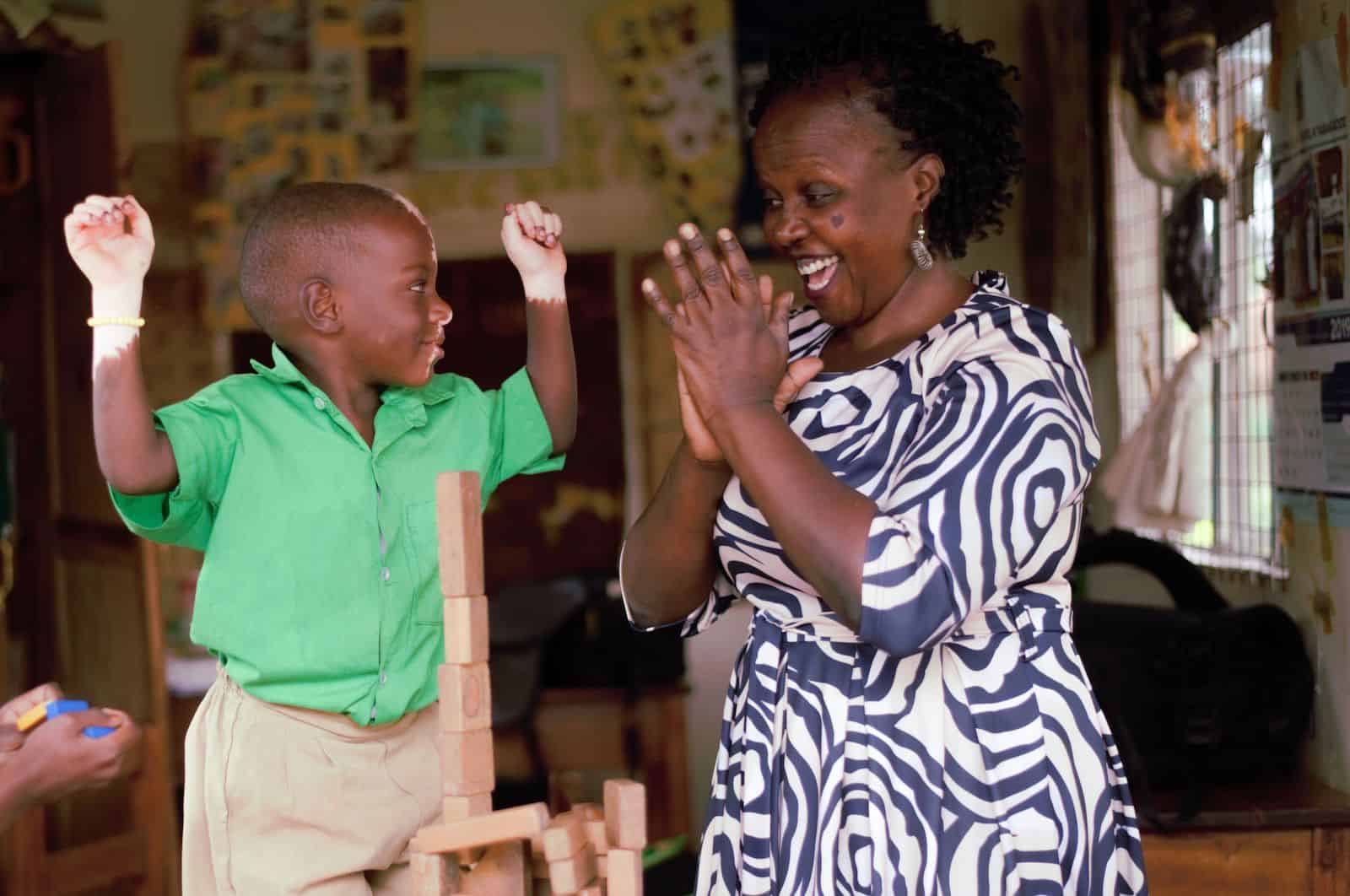 Shakul with his cheerleader and special-needs teacher, Mary.

The center staff also secured Shakul a spot at a school for the deaf next year where he can learn sign language.

“Shakul is very sharp so he needs a school that can help him progress,” says Alison, the Director at his child development center. “We are planning to take him to the School of the Deaf in Mulago next year. All the children there are deaf and communicate with sign language.”

In the meantime, Shakul is a beloved part of his community. 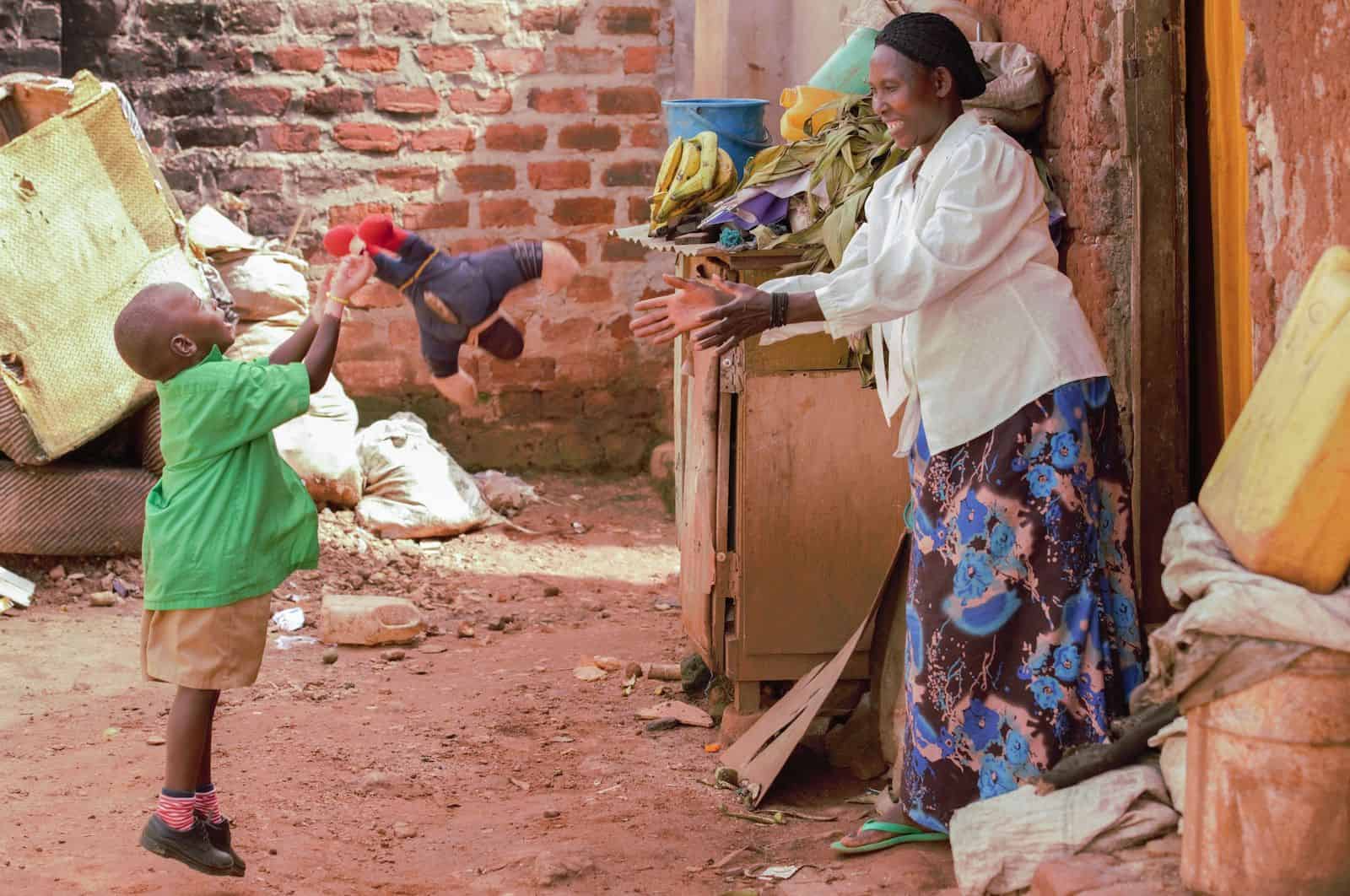 Shakul and Namatovu play toss in the alley outside their home.

Despite his rare disease, Shakul has a charming personality and is loved everywhere he goes. He is inquisitive and loves playing with machines, phones and computers. Although he can neither hear nor speak, he has invented his own form of communication, using his hands and body movements to express himself.

Shakul also adores his grandma. Often he will sit on her lap, cuddle her arm and suck his thumb. Although Shakul has not met his mother, his father visits occasionally and Shakul loves him. Shakul is also an observant boy.

“He knows if someone is hurting. He reaches out to the person,” says Namatovu. “When I am quiet, he comes and taps me and with his hand he gestures, ‘What is it?’ He also just wants us to play all the time. He likes giving me spontaneous hugs.”

Even more blessings are on the way for Namatovu and Shakul. 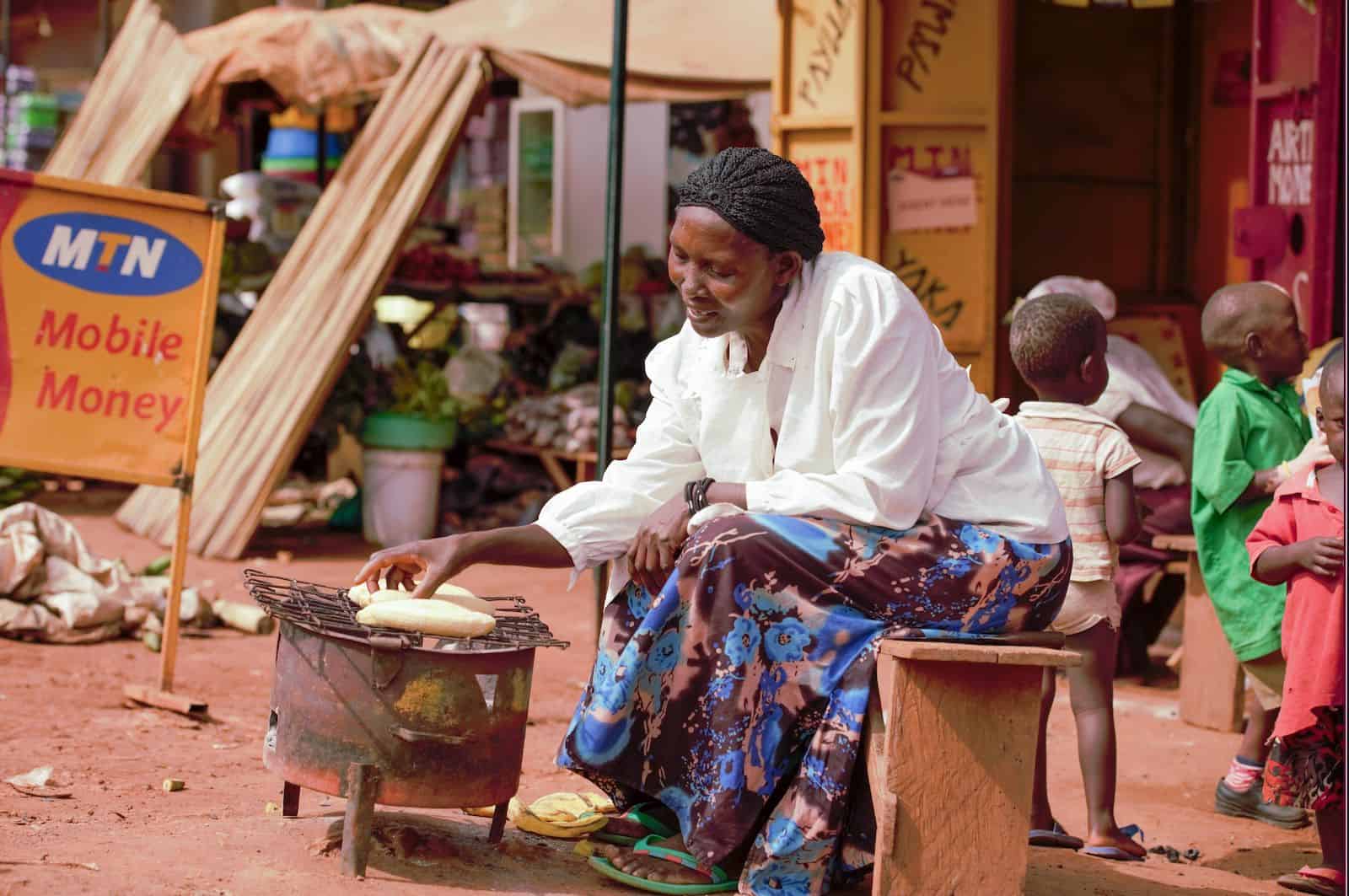 Namatovu cooks and sells plantains on the street.

Besides sweet hugs from Shakul, nothing prepared Namatovu for the blessings that came from caring for the blue-eyed abandoned baby. As she has grown older, her back no longer supports her to wash clothes for a living. Instead, Namatovu now spends her evenings roasting sweet plantains by the roadside.

She can only afford a stuffy, one-room house that leaks when it rains. A financial gift from Matt, Shakul’s sponsor, has changed everything. With the gift, they bought a small piece of land. They have started construction on a safe, sanitary home with three bedrooms.

Namatovu is overwhelmed by this generosity and love.

“I am so grateful to the sponsor,” says Namatovu. “I was so happy and believed indeed that God is here for us.”

The blue-eyed baby who was abandoned in the middle of a cold night has become the blessing she never expected. 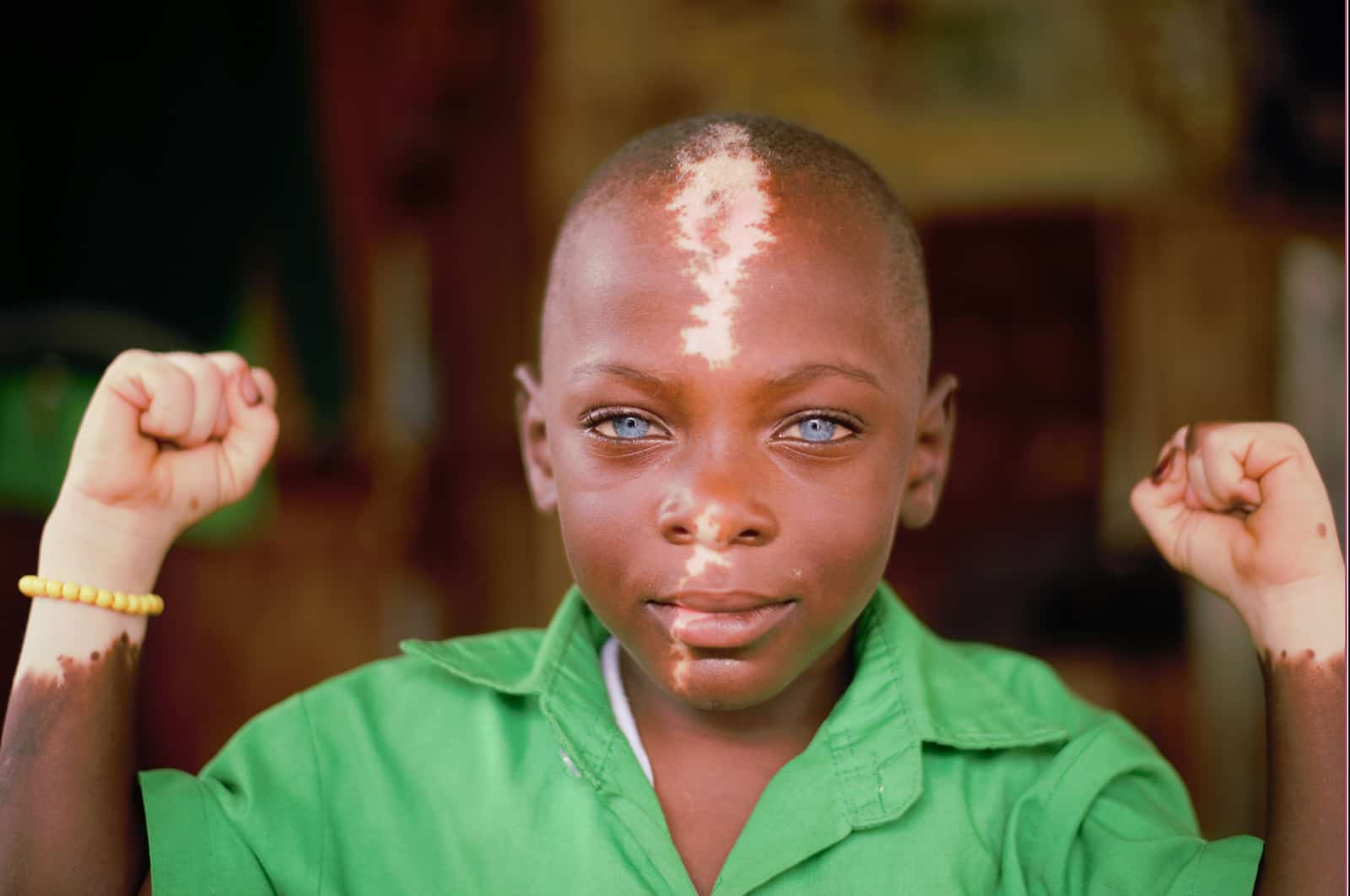 Thanks to the support and strength of his grandmother, the local church and his sponsor, Shakul can grow to become all God meant him to be.

You can help a child who is facing a special need.

Sponsor a Child With Special Needs! › 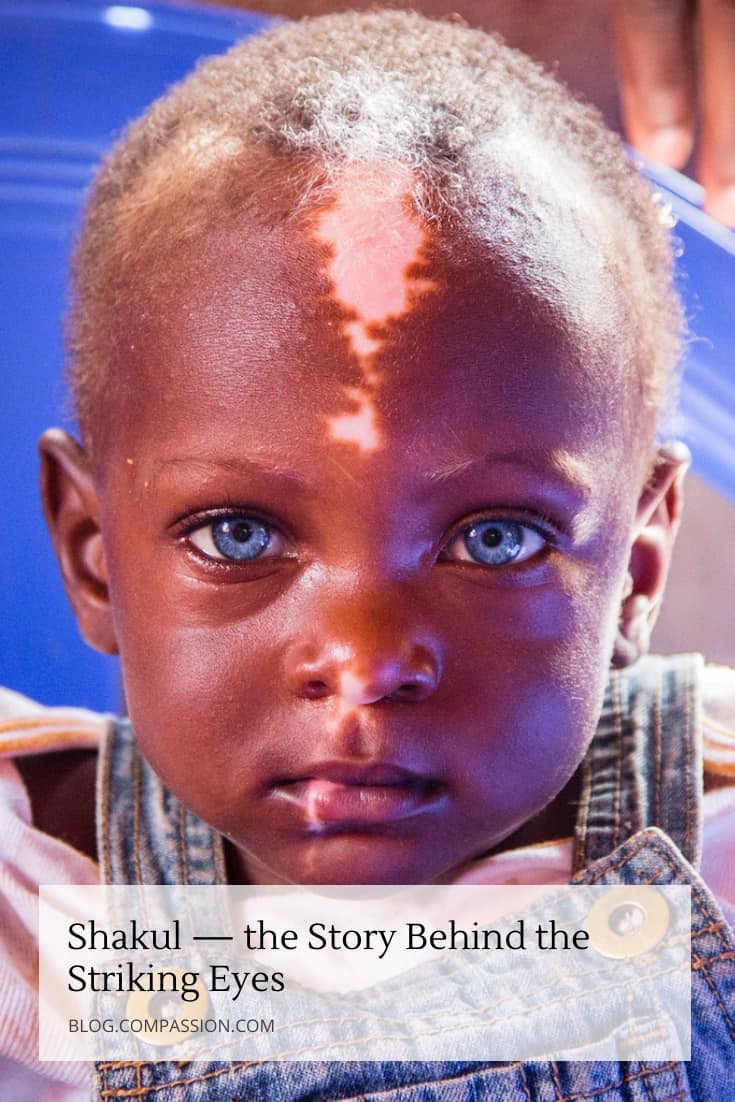