Facts About Tanzania: The Land of Wonders

Tanzania is a stunning country found in East Africa along the Indian Ocean. From Africa’s highest peak, Kilimanjaro (19,340 feet), to the world’s second-deepest lake, Lake Tanganyika (4,710 feet deep), Tanzania is filled with unique scenery and diverse wildlife. Tanzania borders Lake Victoria, the largest lake in Africa and the reservoir of the Nile, and almost 30% of the country is reserved as national parks. The famous Serengeti National Park attracts many safari seekers hoping to glimpse the “big five” — lions, leopards, rhinos, elephants and buffaloes. Additionally, the Serengeti is the location of the “Great Migration,” the largest animal migration in the world. Each year, over 2 million animals including wildebeests, zebras and gazelles trek across the Serengeti and the Masai Mara (Kenya).

Tanzania’s natural beauty does not stop there! If you journeyed through this country, you would also spot the Ngorongoro Crater (Africa’s Garden of Eden), the stunning beaches of Zanzibar, and incredible underwater sea creatures like lionfish, leaf fish, sea horses, green turtles and frog fish. Because Tanzania is home to so many natural wonders, it is sometimes called “The Land of Wonders.”

In this beautiful land there are equally beautiful people. The cities of Dar es Salaam and Arusha showcase skillful architecture and intriguing culture. Although this nation struggles against poverty, malnutrition and child labor, there is hope and there are reasons to celebrate. We’d love to share some interesting facts about Tanzania that will teach you about its fascinating culture and traditions. Come travel with us to the country that nearly 100,000 Compassion-assisted children call home!

Here are some quick, interesting facts you should know about Tanzania.

Culture and Traditions of Tanzania

With over 120 ethnic groups, Tanzania has a rich, ancient heritage. Although culturally eclectic, Tanzanians feel a strong sense of national pride. Let’s learn some more about this special country!

Religion: A little over 60% of the population identifies as Christian, while about 35% identifies as Muslim. A small number of Tanzanians follow folk religions or are unaffiliated with a religion. There are generally cordial relations among religions in society; however, there continues to be increased tension between Muslims and Christians and between secular and fundamentalist Muslims.

Clothing: Tanzanians are modest and conservative in their dress. While younger generations, especially in urban regions, may wear T-shirts and jeans, many Tanzanians dress traditionally. The traditional garment for women is the “kanga.” This large, rectangular cotton cloth features bold, bright prints, and modern designs often include a proverb or riddle written on them. The kanga can be worn in a variety of ways, from a simple wraparound skirt to complex draping styles. Men in Tanzania typically dress in less colorful clothing than the women. Pants and dress shirts are common, but shorts are seen as inappropriate and childish. The “kanzu” is the traditional outfit for men. It consists of a white or beige robe and a tassel that hangs from the collar. For official occasions, a “kofia” (traditional cylindrical cap) and a suit jacket or cloak are added.

General culture: Tanzania does not have one single politically or culturally dominant ethnic group. With over 120 different Indigenous African peoples making up its population, Tanzania is diverse. Today the majority of Tanzanians are of Bantu descent. The mainland of Tanzania (Tanganyika) makes up 99% of the country. However, Zanzibar (an island 22 miles off the coast) and Pemba island both have strong cultural and political influences. Tanzanians are friendly and polite. Family loyalty, respect for elders and self-control are important values. Children enjoy playing marbles, tag and soccer. Due in part to British influence, rugby is also a popular sport in Tanzania.

Music and Dance of Tanzania

The music and dance of Tanzania reflect its population and are diverse and full of life. Ancient songs and dances pass down knowledge, beliefs, rituals and even historical events. There is so much to share that we will just choose a few styles to feature.

Most of the ethnic groups in Tanzania use the pentatonic scale – a scale with five notes – in their traditional music. Two-part harmony is a common feature. Instruments such as drums, the “litungu” (a lyre made from wood, rope and cowhide) and nose flutes, along with vocals, are used.

The Sukuma tribe is known for its daring “Bugobogobo,” or snake dance. A group of dancers display their courage and skill by performing with a live snake, which strikes at them. The Haya tribe enjoys choreographed dancing to the beat of drums. Men and women dance together as a group, and their performances include complex, athletic moves.

Food and Drink of Tanzania

Tanzanians typically eat simply. Their meals often include grains, rice, vegetables, fruits and spices, with meats like chicken and fish reserved for special occasions. Along the coast and on Zanzibar, seafood is popular, while bananas, papayas, eggplant, tomatoes, cassava and plantains grow abundantly on the fertile land. Here is a quick sample of Tanzanian cuisine.

Ugali is a thick paste made from cassava flour, millet or sorghum. This Tanzanian staple is typically served with flavorful sauce, beans or cooked vegetables. Ungali is popular in many sub-Saharan countries and is a filling element of many meals.

Tanzanian coconut rice combines the rich flavor of coconut with savory seasonings, vegetables and meat. Tanzanians often use coconut milk as an ingredient in their cooking. Learn to make this healthy, hearty meal!

Chai tea is a popular drink in Tanzania. Black tea and milk are used as the base and then seasoned with ginger, cinnamon, peppercorn, cloves and cardamom. This spicy drink can be sweetened with sugar and served hot.

Mandazi is a delicious fried bread, typically eaten in East Africa along the Swahili coast of Tanzania and Kenya. This dessert resembles a coconut-flavored doughnut and is topped with sugar or icing. Yum!

“If you want to know the secrets of a man, sit down and eat with him.”

A Story From Tanzania: Running Down Her Dream

In a hot region of Tanzania that is best known for its fields of sunflowers, you might not expect to find an aspiring athlete. From a young age, the odds were stacked against Clenzeensia, but her passion to run and competitive spirit fueled her.

“I remember when I was young, I would race my cousin all the time and I would always win. And my mother loved sending me to the shop because she knew I would be fast,” says Clenzeensia.

Despite working hard, Clenzeensia’s mother and aunt often struggled to provide enough food for the family. When Clenzeensia was 4 years old, she was registered at a Compassion center that had started at a local church. This was a great blessing not only for Clenzeensia but also for her family, who received assistance and food.

It was at the Compassion center where Clenzeensia’s dream of being an athlete began. She eagerly ran in a competition organized by Compassion Tanzania for all the registered children in the country. Although she lost, Clenzeesia was even more determined to compete.

The staff at the Compassion center noticed Clenzeensia’s interest and talent in athletics. Elibariki, the project coordinator, says, “As a center, we want our kids to know that they can make a career out of what they love to do. … We made sure we supported Clenzeensia by taking her to all the competitions that she wanted to take part in.”

Clenzeensia became faster and won more and more races! Out of all the competitions that Clenzeensia participated in, she is most proud of her second-place finish in the East African under-17 competition. She says, “When we got to the finals of that competition, I pulled a muscle and the doctor told me not to race. I pushed through and came in second. I was really proud of myself.”

Clenzeensia is now 20 years old and continues to dream. Her dream is to one day represent Tanzania in bigger competitions like the Olympics!

“Hakuna matata” is much more than the popular Disney song from “The Lion King.” The Swahili phrase is literally translated as “no worries.” It is a common expression in Tanzania spoken as a reminder to slow down and enjoy the moment.

Photos of What Daily Life is Like in COUNTRY

Do you want to keep learning about the beautiful country of Tanzania?

Facts About Compassion and Tanzania › 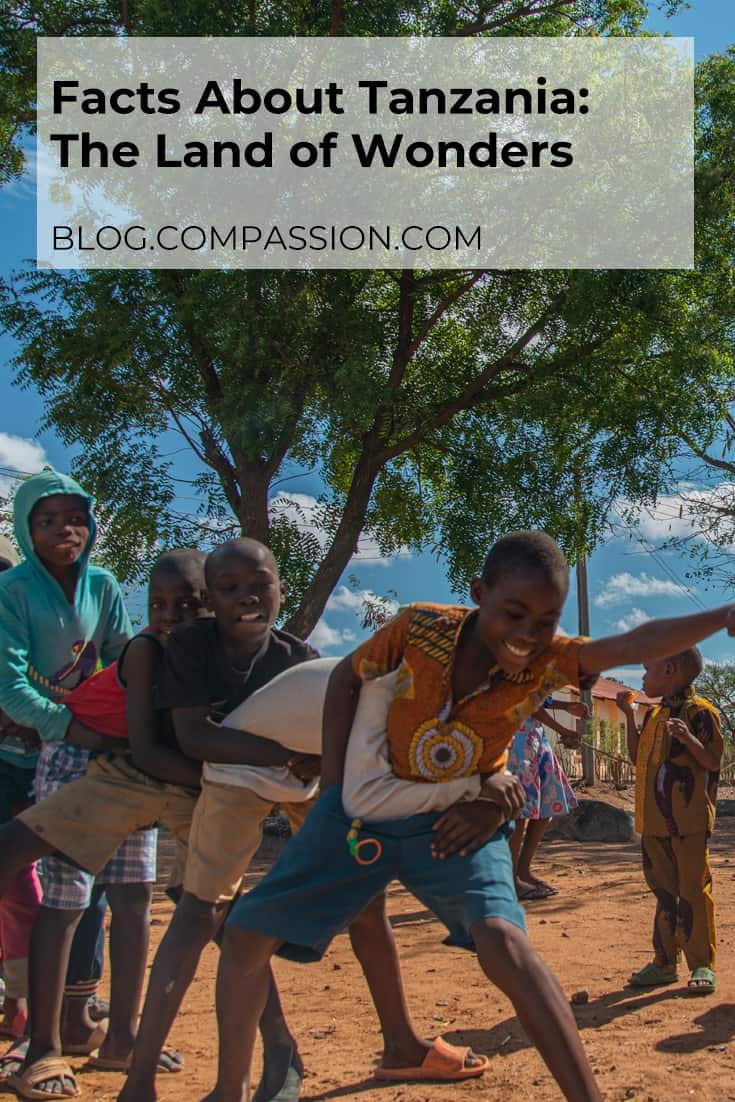 Prev Post:10 of the Most Unique Christmas Traditions Around the WorldNext Post:The Thoughtful Christmas Surprise That Relieved a Worried Mom