After President George H.W. Bush’s death in November 2018, Compassion International revealed that in his 70s he had taken the seemingly small step to sponsor a child living in poverty.

“Years ago, he raised his hand (surrounded by security personnel) to get a child packet at a Compassion concert,” remembered Wess Stafford, Compassion International President Emeritus. “His packet contained info on a little Filipino boy. I agreed with them this must be kept a secret. For his own security, this little boy must not know that his sponsor was the president of the United States!”

Although that little boy in the Philippines, Timothy Villalba, didn’t know who his sponsor was at the time, President Bush still made a tremendous difference in his life. Because of sponsorship, Timothy, now an adult, received an education and provides for his family as a community officer.

But you don’t have to be a world leader to have a big impact on a child’s life. Here are a few ways we can learn from President Bush’s small act of compassion. 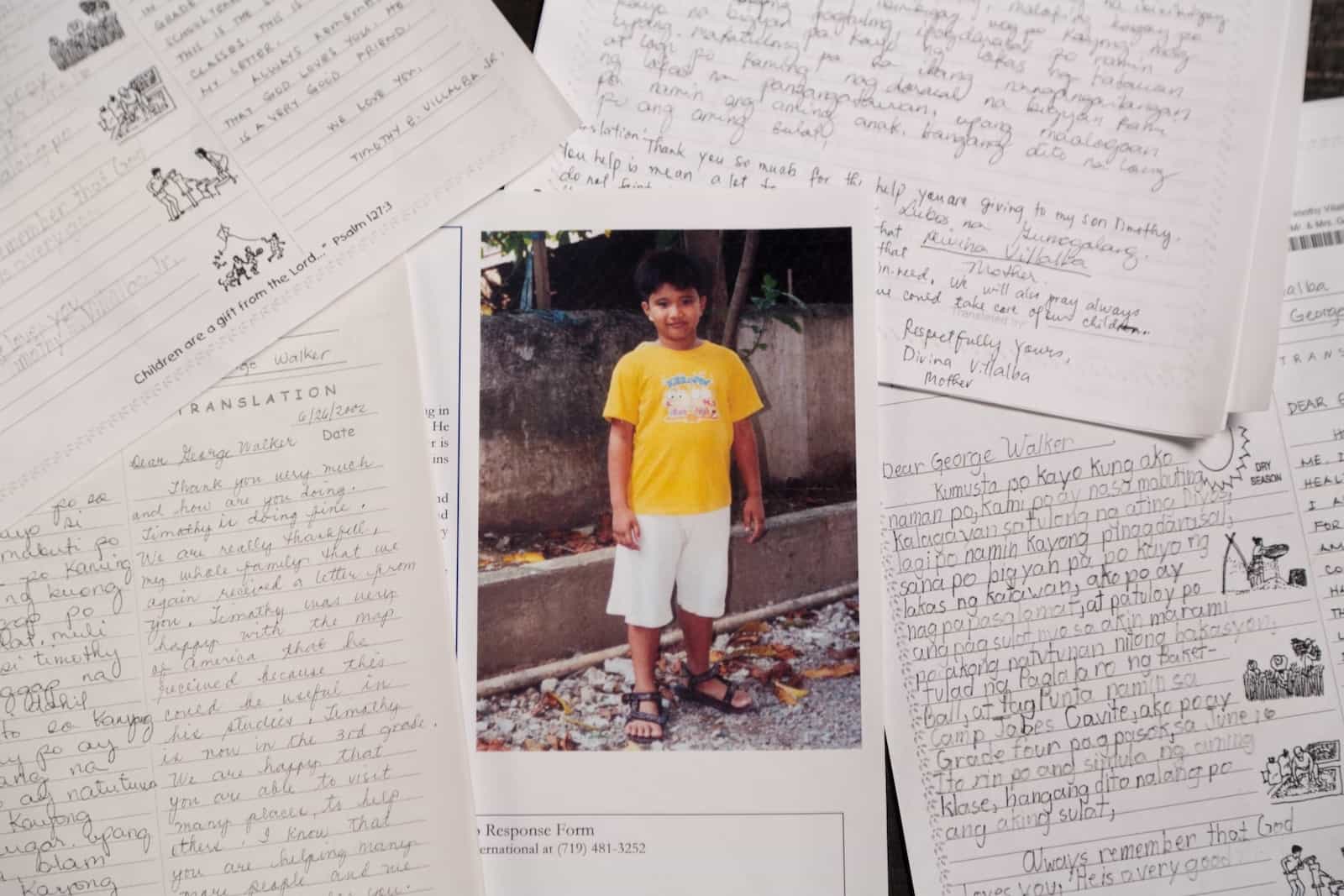 As individuals, isn’t it easy to see the huge need around us and crumple under the weight of it? To feel like there’s really nothing I can do to make any kind of meaningful dent in the world’s problems?

But despite seeing the issues of the world on a macro scale, President Bush seemed to know what we believe at Compassion — that we can change the world one life at a time. Although he was once one of the most powerful men around — arranging world affairs — President Bush still believed it was meaningful to act for the one.

And when we focus on the one, it has ripple effects into families and communities.

“I will forever be grateful,” says Timothy. “Now I am a father of a 3-year-old girl, and I will do my best to be a great father to her, provide for her, and lead her to the ways of the Lord. … My biggest takeaway from being a former beneficiary is that I was molded in the right path and in the ways of God.”

The second thing we thing we can learn from President Bush is that it never hurts to have a little fun.

Stafford, who was president of Compassion International at the time, agreed to monitor President Bush’s letters to ensure Timothy’s safety. President Bush wrote under the name George Walker and didn’t reveal his former profession … but soon he started having a little fun with Timothy, dropping hints to his true identity.

“Here is a picture of our dog. Her name is Sadie. She has met a lot of famous people,” wrote President Bush once. 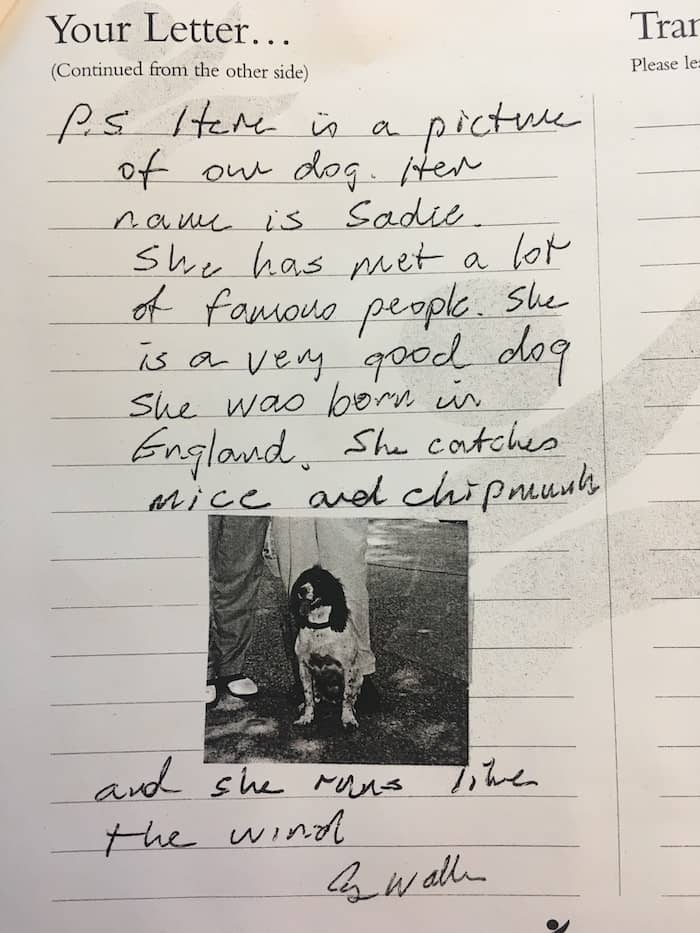 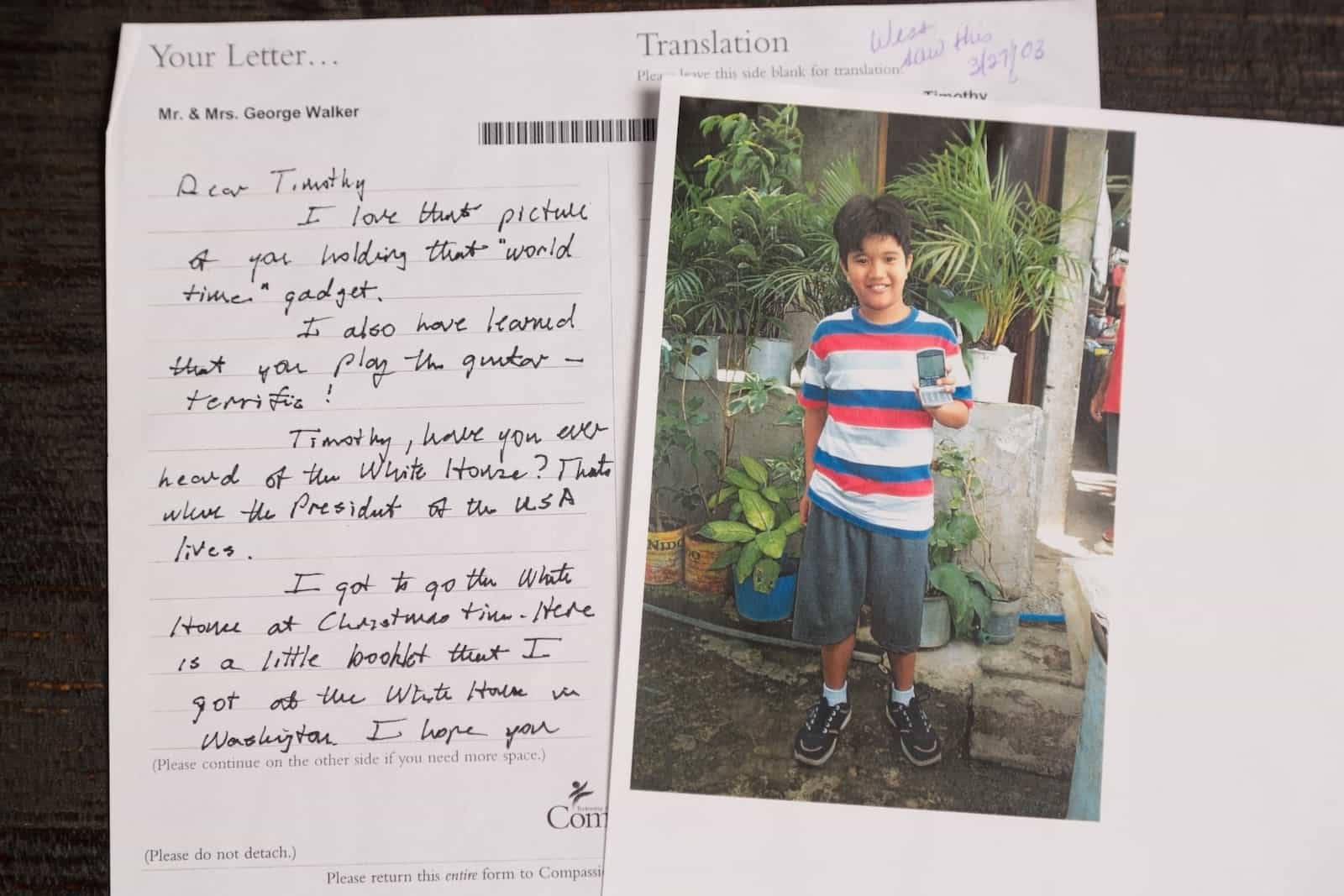 Maybe you can’t share with your sponsored child how many celebrities your pet has met, but kids love hearing about your life — even about your pets! Your letters don’t have to be long. I can guarantee that the child you sponsor will treasure each word.

The simple words of love you share with the child you sponsor really do make a lasting difference. We’ve heard stories firsthand from so many young adults about how the words of love and encouragement from someone thousands of miles away got them through a tough time, made them feel valued and brought them hope.

Likewise, President Bush was a source of love for Timothy.

“Though we have not met, I love you already,” wrote President Bush in his first letter to Timothy. 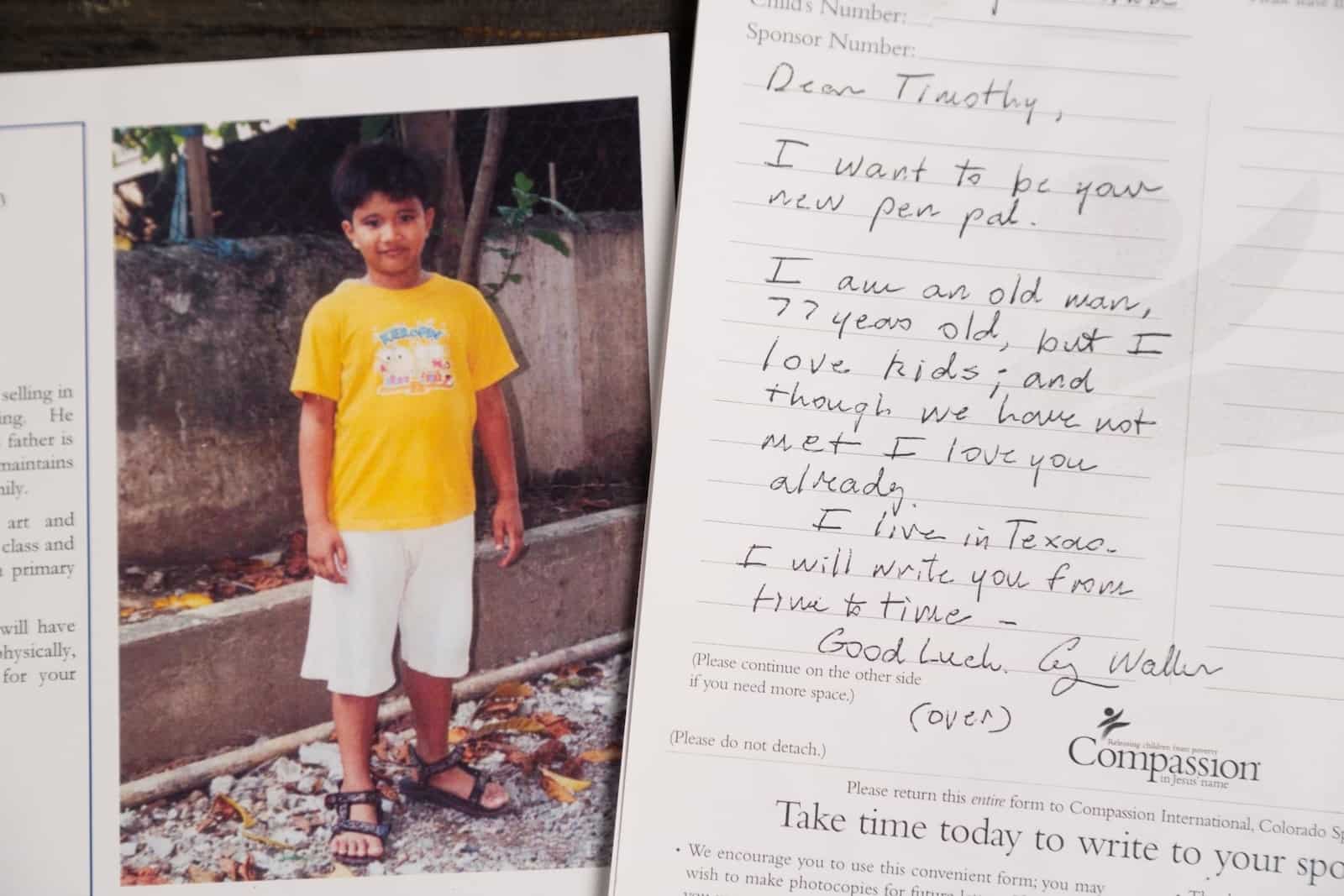 Most of all, Timothy hopes others will be inspired to sponsor a child through his story.

“That’s where change begins in a child, with potential that they would be successful in the future,” he said in an interview with ABS-CBN. “I’ve been married for two years. I have a daughter. I have a job,” he said. “For me, I’m successful and happy.”

Just like President Bush took that first small step, raising his hand at a concert to the surprise and concern of all his security guards, will you take that first step to change a child’s life? We know it will mean the world to a child living in poverty.

Prev Post:5 Ways to Be a More Consistent Letter Writer This YearNext Post:How To Use Your Facebook For Good