The Extreme Jobs of People in Poverty

People living under the international poverty line go to extreme measures to earn a living. Often they have few to no safety nets — figuratively or literally. Meet four people in Asia who do extreme jobs to feed their families. Though their occupations are harsh, they can teach us the dignity of work and the beauty of sacrificing to care for your loved ones.

Pa-aling Compressor Diving, One of the Most Dangerous Fishing Methods 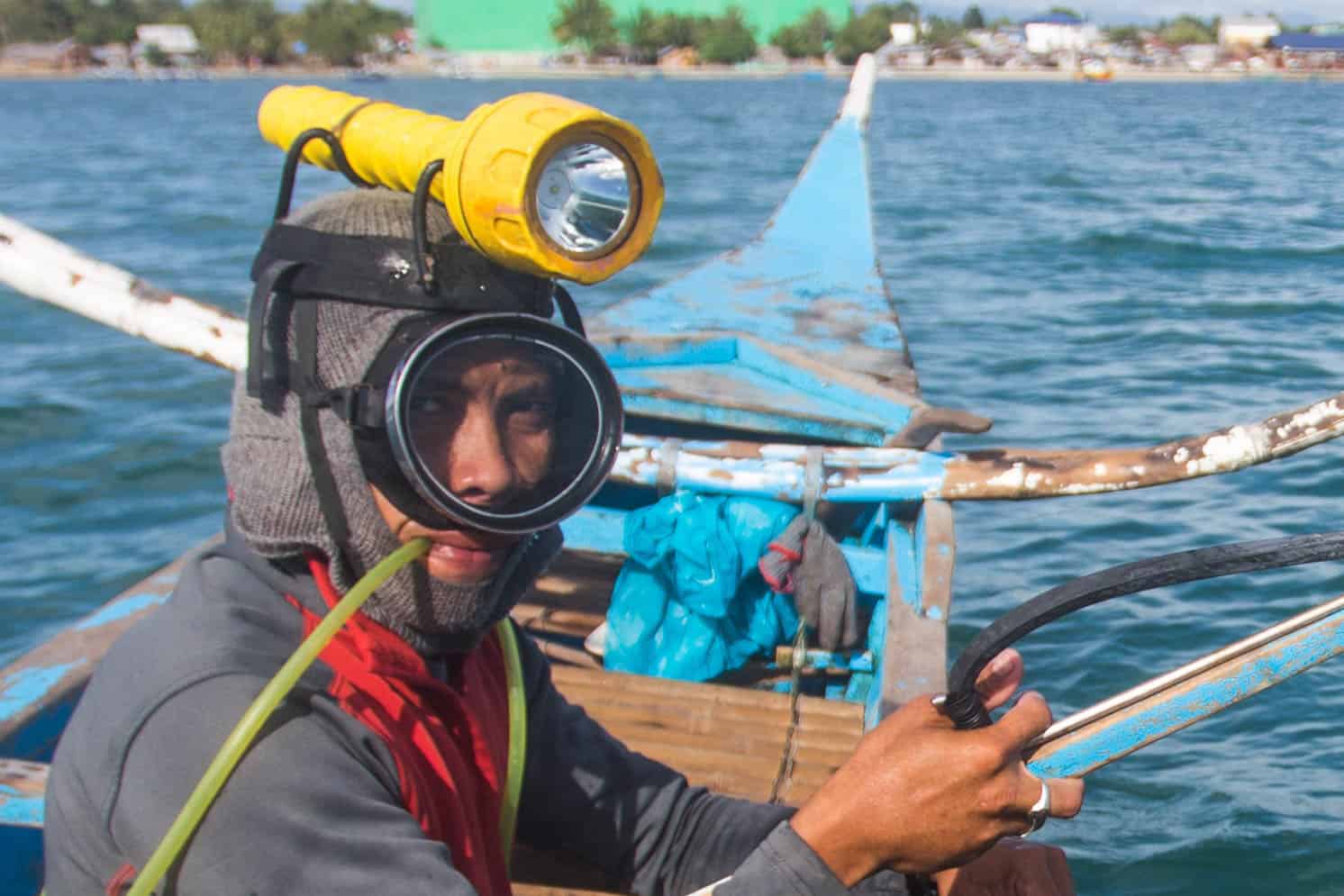 Elmer risks his life every night as a pa-aling fisherman, an extreme method of deep-sea fishing in the Philippines. Equipped only with a regular plastic hose attached to a compressor for breathing underwater, he can stay submerged for an hour or two at a depth of 65 to 100 feet. Elmer uses a self-made harpoon, homemade flippers and a flashlight attached to his head.

The risk of decompression sickness (otherwise known as “the bends”) is high, which can lead to permanent paralysis, injury or even death.

“It is very risky and scary, no doubt,” says Elma, Elmer’s wife. “I always fear for my husband’s life every time he goes.” 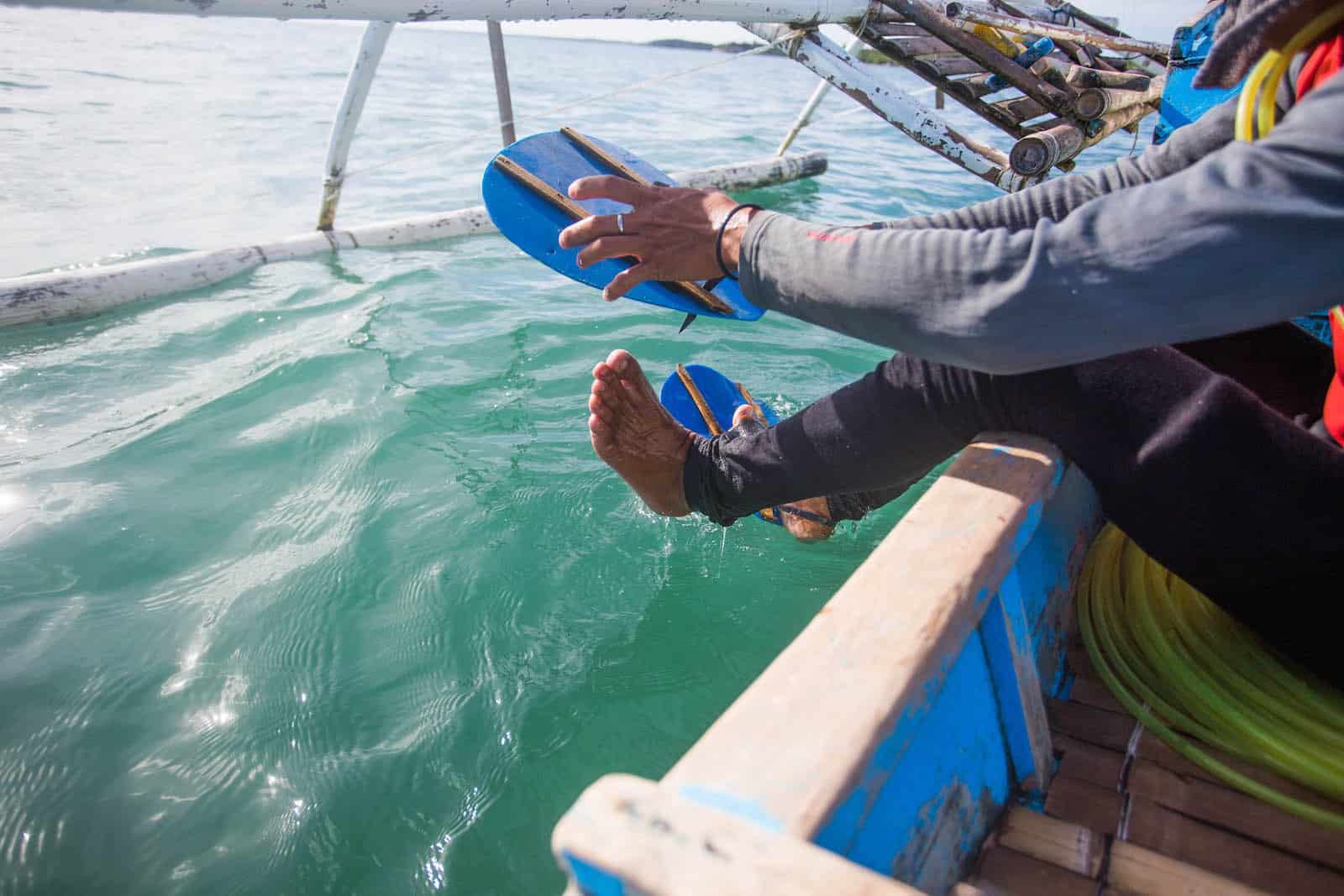 Elmer usually fishes in a group. He and his buddies hit the waters late in the afternoon, boarding their old canoes, powered by single-turbine motors, to take them far out into the Camotes Sea. Among their team, Elmer is the expert in swimming after the fish and harpooning them. The others are better at diving deeper for shells and sea urchins.

When the team goes out, they can haul in up to 22 pounds of fish, which earns about $7.70, a meager amount that will purchase food for the family for only a day or two. Unfortunately for Elmer, his buddies don’t fish every day because they don’t want to take the risk. When alone, he earns less and has no one to help if something goes wrong.

Elmer’s work has no guarantees, and Elmer knows it. There is no rescue team, no reserve oxygen tank and definitely no regulation diving equipment. There are no insurance or benefits from the government, and there is certainly no retirement pay. Elmer hopes to find another way to earn a living some day. 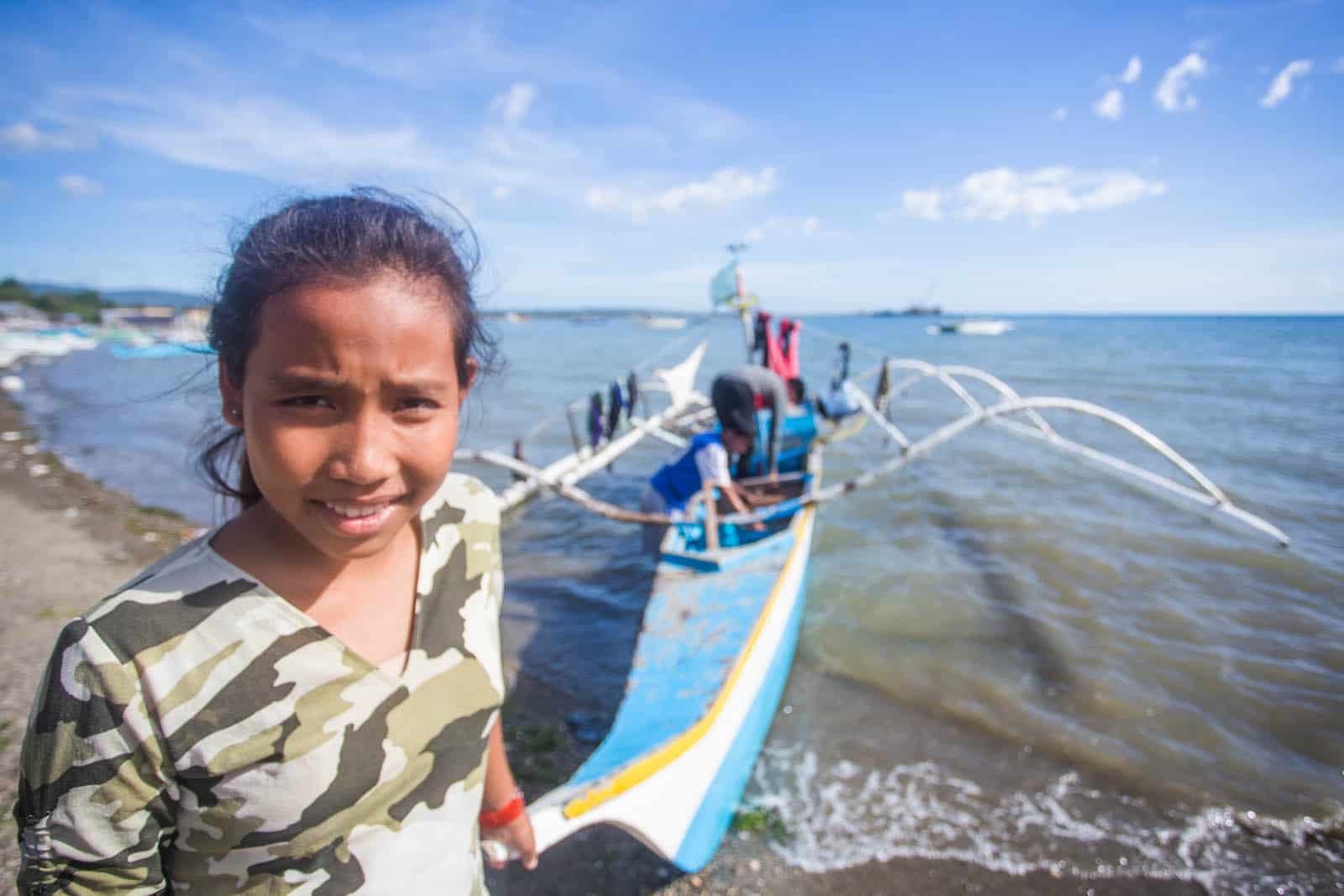 Elmer’s daughter, Elmera, is registered in Compassion’s program, receiving opportunities for a better future. Like her parents, Elmera is good at math, and she hopes to be an accountant.

“We support Elmera in whatever she hopes to accomplish,” Elmer says. “We know she studies hard, and thanks to the Compassion center, we can be sure that she has a good chance of getting to college, finishing her studies and becoming an accountant. For this, we are thankful to Compassion’s sponsorship program and to her sponsor.” 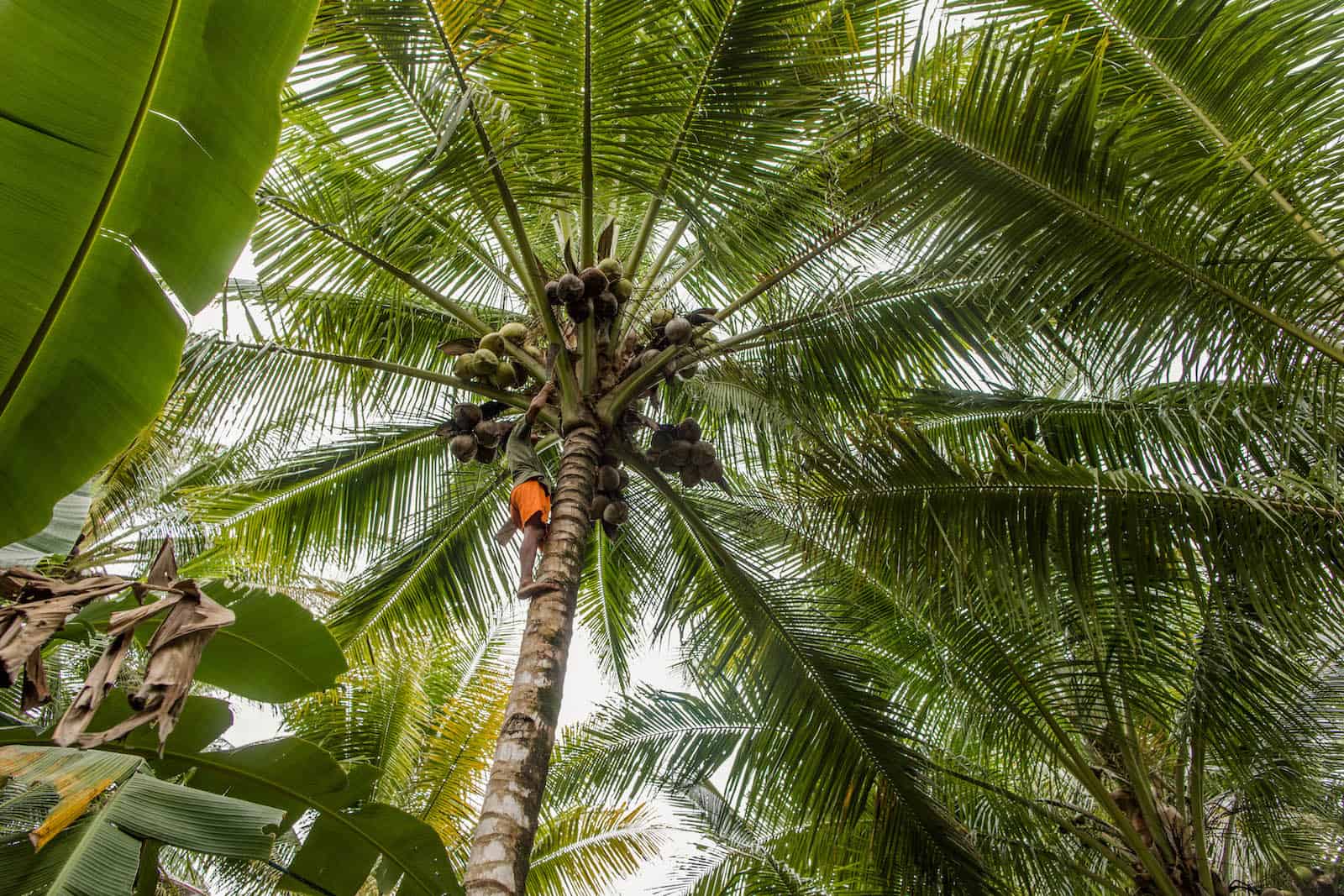 Can you imagine climbing a 9-story building with no safety equipment — and no shoes? Each morning, Ronal hooks a machete onto his belt, leaves home barefoot and risks his life climbing 100-foot coconut trees. The 30-year-old from Indonesia walks about 2.5 miles to the coconut farm where he’s working for the day. Ronal stands at the base of the first tree and looks up, calculating his ascent. Then, without any climbing equipment, he places his bare hands and feet on opposite sides of the trunk and slowly makes his way up, one cautious step at a time. At the top, he uses his machete to cut the coconuts, sending them with a loud thud to the ground below. 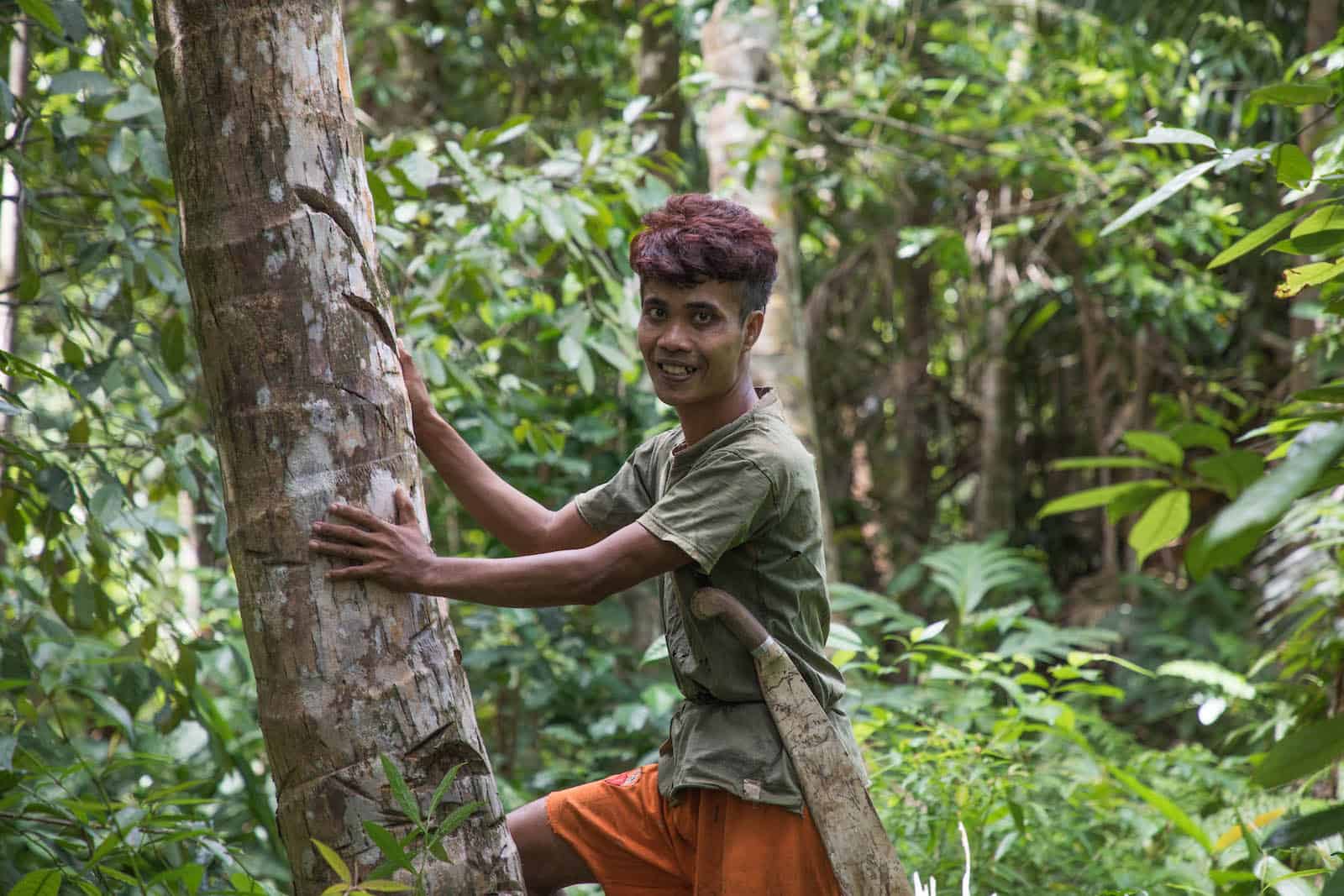 In a day, Ronal can climb 20 to 30 trees, spending about 25 minutes per tree. On a good day, he will be hired by two different coconut farm owners. But on many days, there is no demand for coconut tree climbers. On those days, he earns nothing for his family. Typically, Ronal earns about $14 a month.

Ever since his father left, Ronal has been the provider for his mom and younger brother, Amigel. Amigel is sponsored through Compassion, which lifts a big burden from Ronal, who never attended school and cannot read or write.

“I can see that my brother learns many good things at the center,” says Ronal. “Beside that, he also receives support for his school fees and books. So we don’t need to spend the money I earn on those things. My mother can use my earnings to buy fish, rice and vegetables for us … I have big hopes for my little brother. I want him to have a successful life in the future and a better job than mine.” 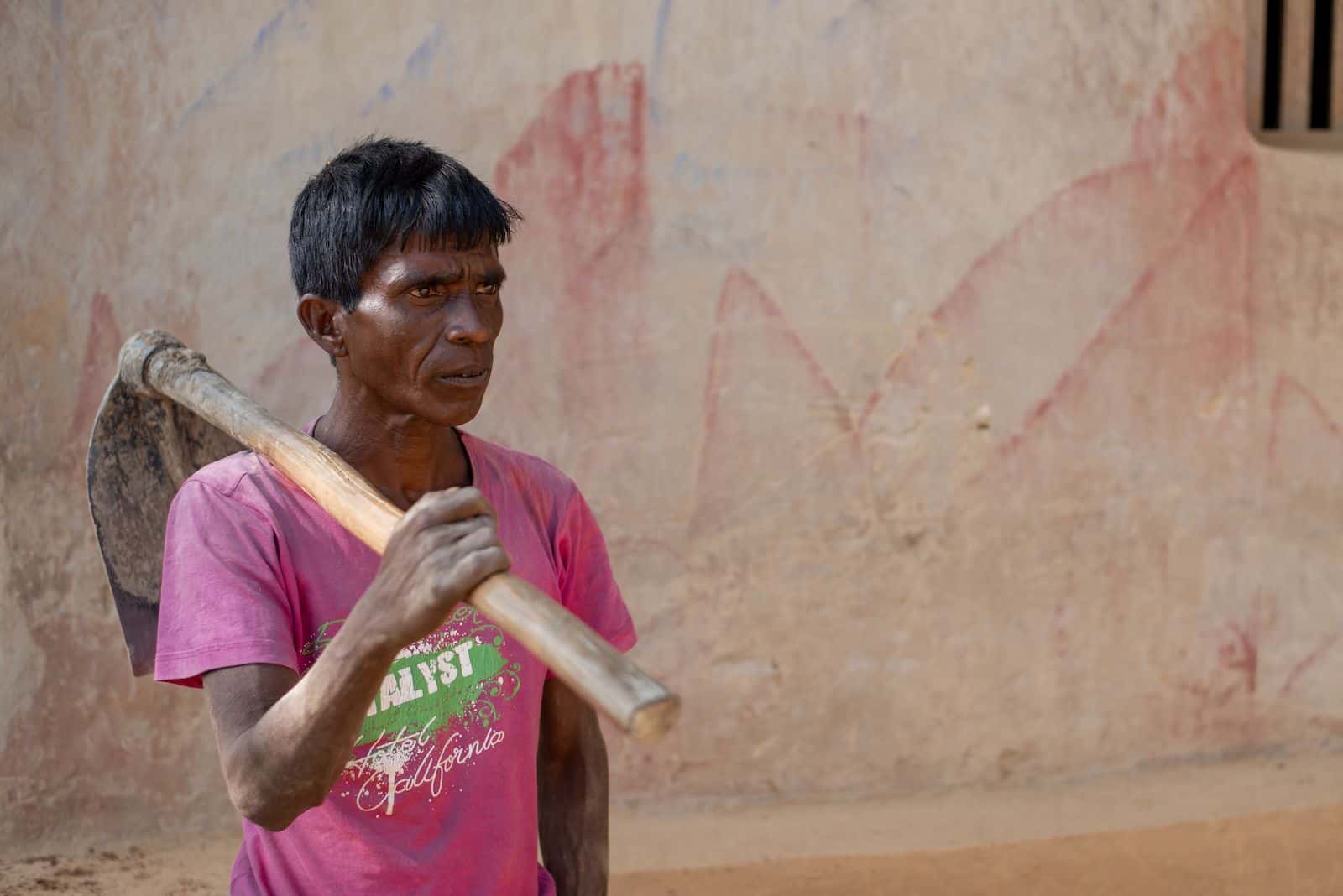 This extreme job is a reminder of how far the love of a father will go in feeding his children.

Budrai is up before dawn. He wants to beat the other farmworkers to the fields. Armed with a hoe, crowbar and sack, Budrai sets out on his search for holes created in the fields overnight by rats. On a good day, the widowed father finds stalks of ripened rice in the holes. He collects whatever stashes he can find throughout the long day and takes his small collection of rice and any rats he catches home to feed his two teenage children, Salina and Subhas. 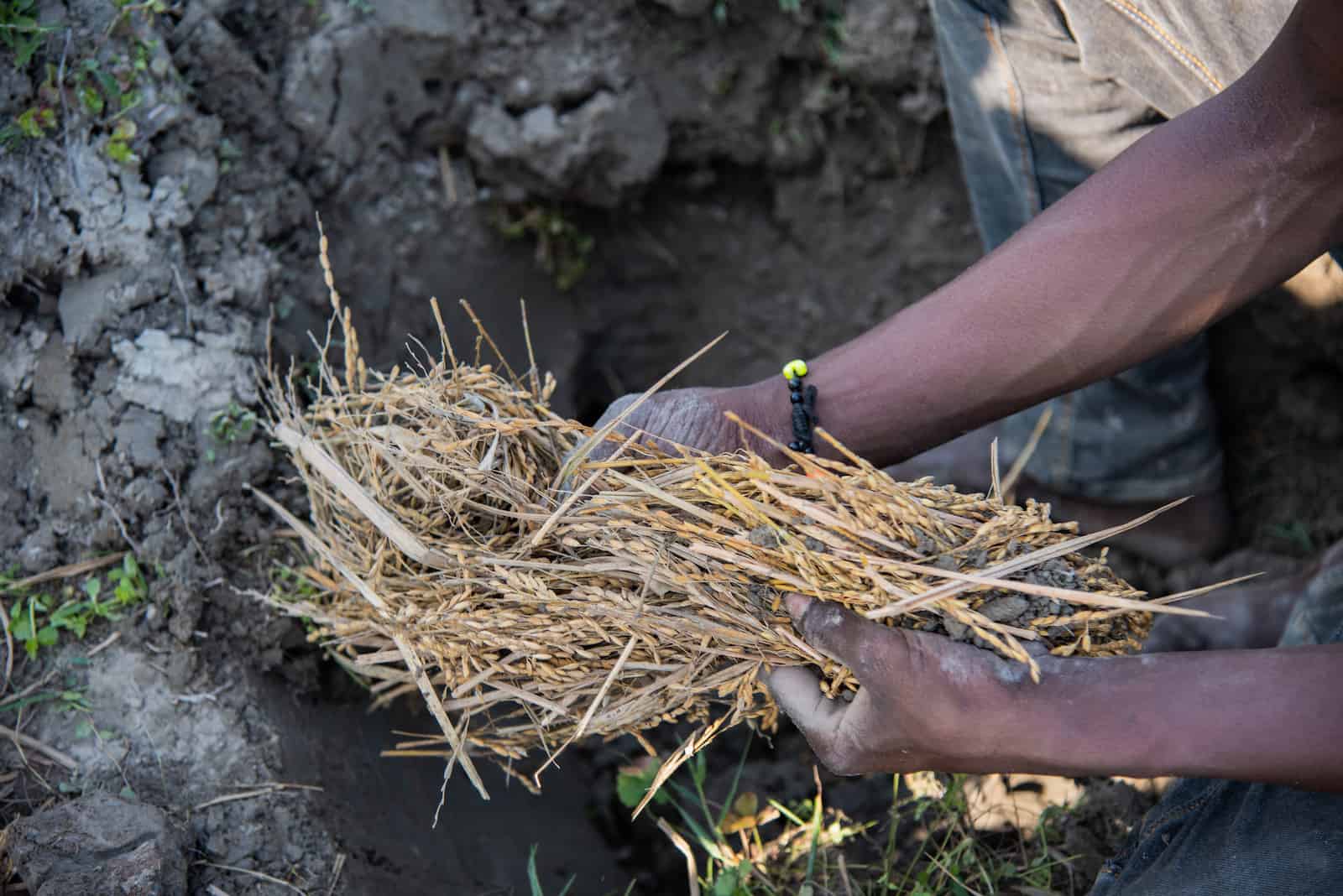 Budrai is one of many farm laborers in his village in Bangladesh who do not own land. The average income of a laborer during the farming season is $3.50 per day for men. For women who do the same work, the pay is $2.35. But this work is seasonal, leaving laborers with no income in the off-season. And as more farmers invest in modern equipment, the need for manual labor shrinks.

Low wages, seasonal work and less demand for labor create increasing vulnerability for laborers like Budrai and their families. Collecting the stashes of rice created by rats is a desperate measure, but Budrai knows no other options to feed his family. Others in the village look down on Budrai, considering him to be on the lowest rung on society’s ladder.

“Thankfully, our low social standing does not affect my children’s participation at the church’s child development center,” says Budrai with a bright smile. “They go to the same center as other children. My daughter also gets treated as equally as my son.”

Salina and Subhas receive educational and nutritional assistance from the center. Although many children join their parents in the rice fields, spending hours searching for rat holes, the center staff works hard to encourage families to keep their children in school. 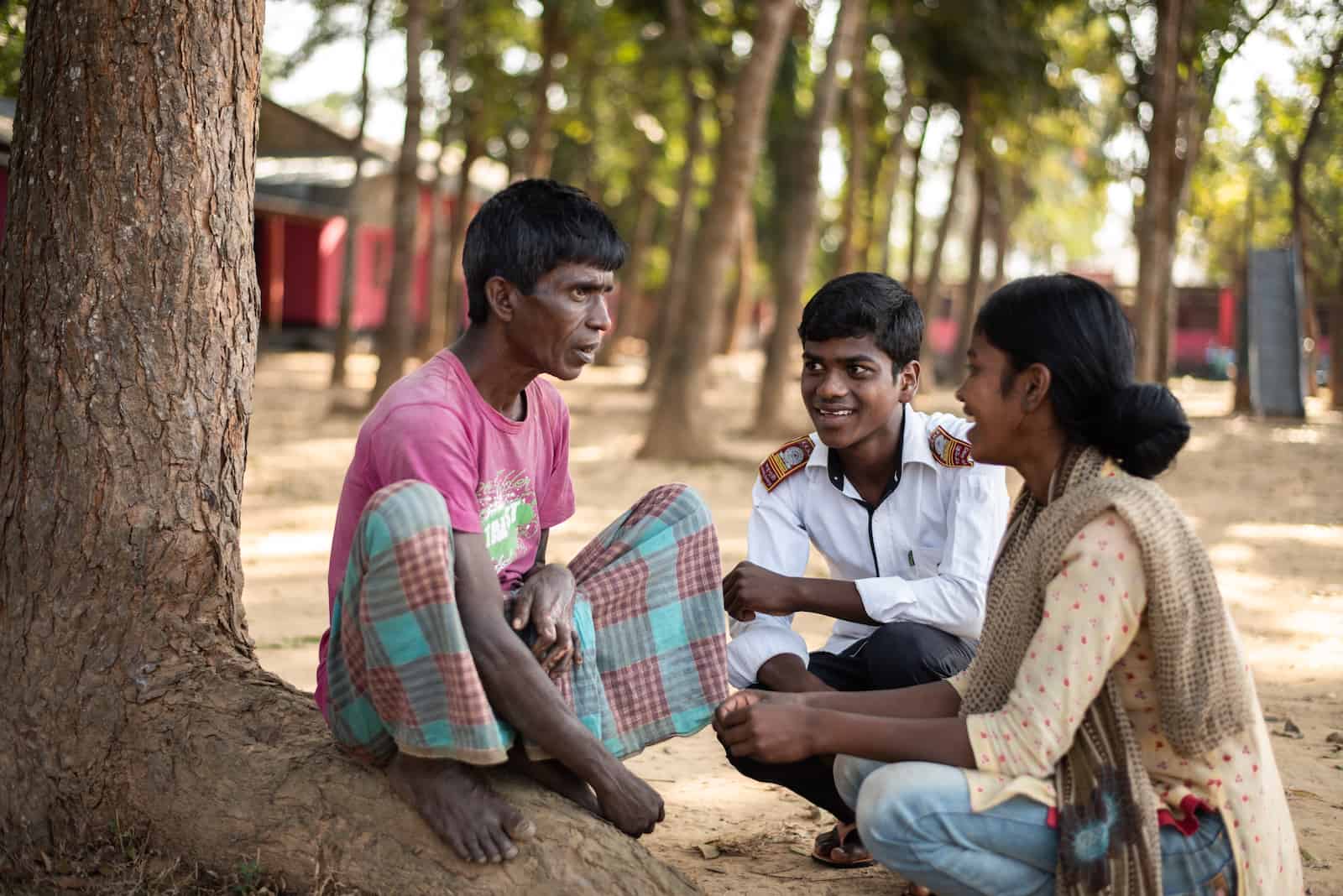 Budrai with his children, Subhas and Salina

Though Budrai would do anything to provide for his children, he is so glad they will not have to follow in his footsteps.

“When my wife passed away, I couldn’t think of any other options than making my two children work along with me on the farms or collecting grains of rice from rat holes,” says Budrai. “Registering them into the center and its Child Sponsorship Program was the best decision I have made in my life, to see a better future with the help of the church. And I am confident now that my children will never go hungry.” 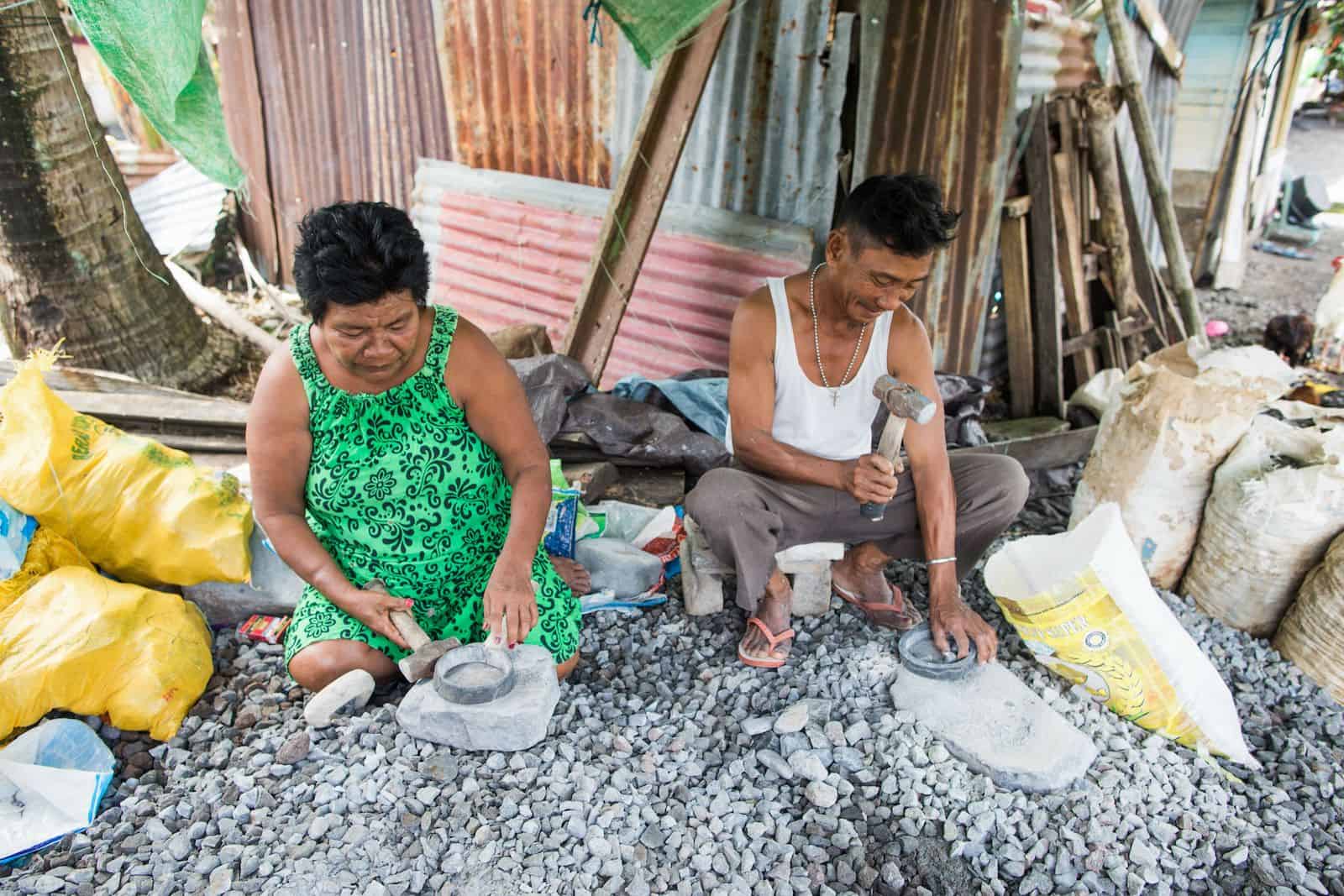 Many people living in extreme poverty resort to rock breaking as a way to earn a living. This may not seem like an extreme job until you consider the amount of work it entails, the amount of pay it earns and the physical risk of the work.

Yulius crouches in the heat under a plastic tent, alongside his wife, Hartini, pounding stones gathered from the beach near their home in Indonesia. The couple’s goal over this 11-hour work day is to crush the stones into small pebbles, producing enough pebbles to fill one sack weighing 110 pounds.

They do this each day until they have 25 sacks of pebbles. A truck picks up the sacks to be used in construction, and they are paid $18 for the month’s work. The work is tedious, but it is also dangerous. The couple’s gnarled hands and deformed fingernails attest to this. Accidents are common, and fingers, instead of stones, receive the force of the hammer. 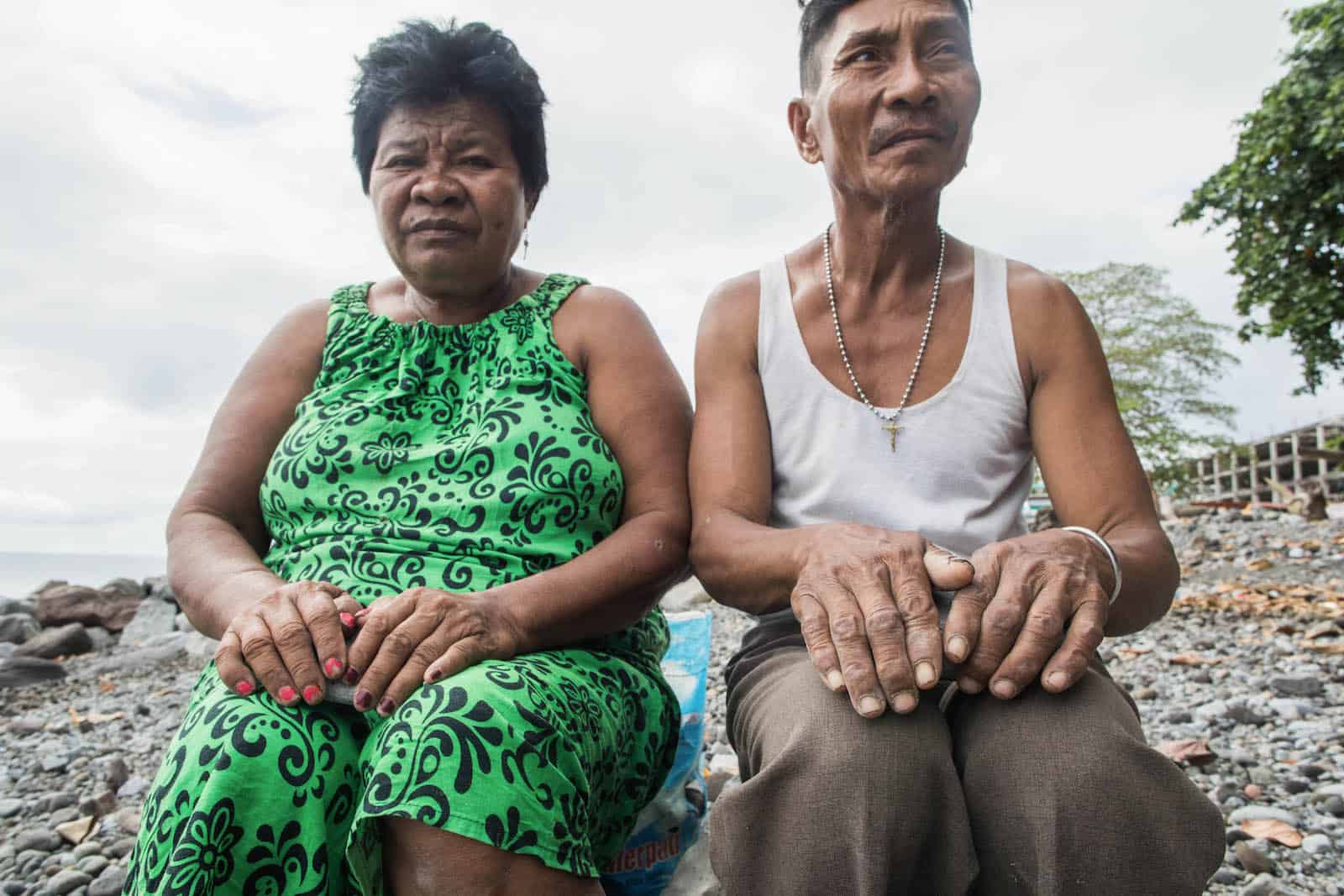 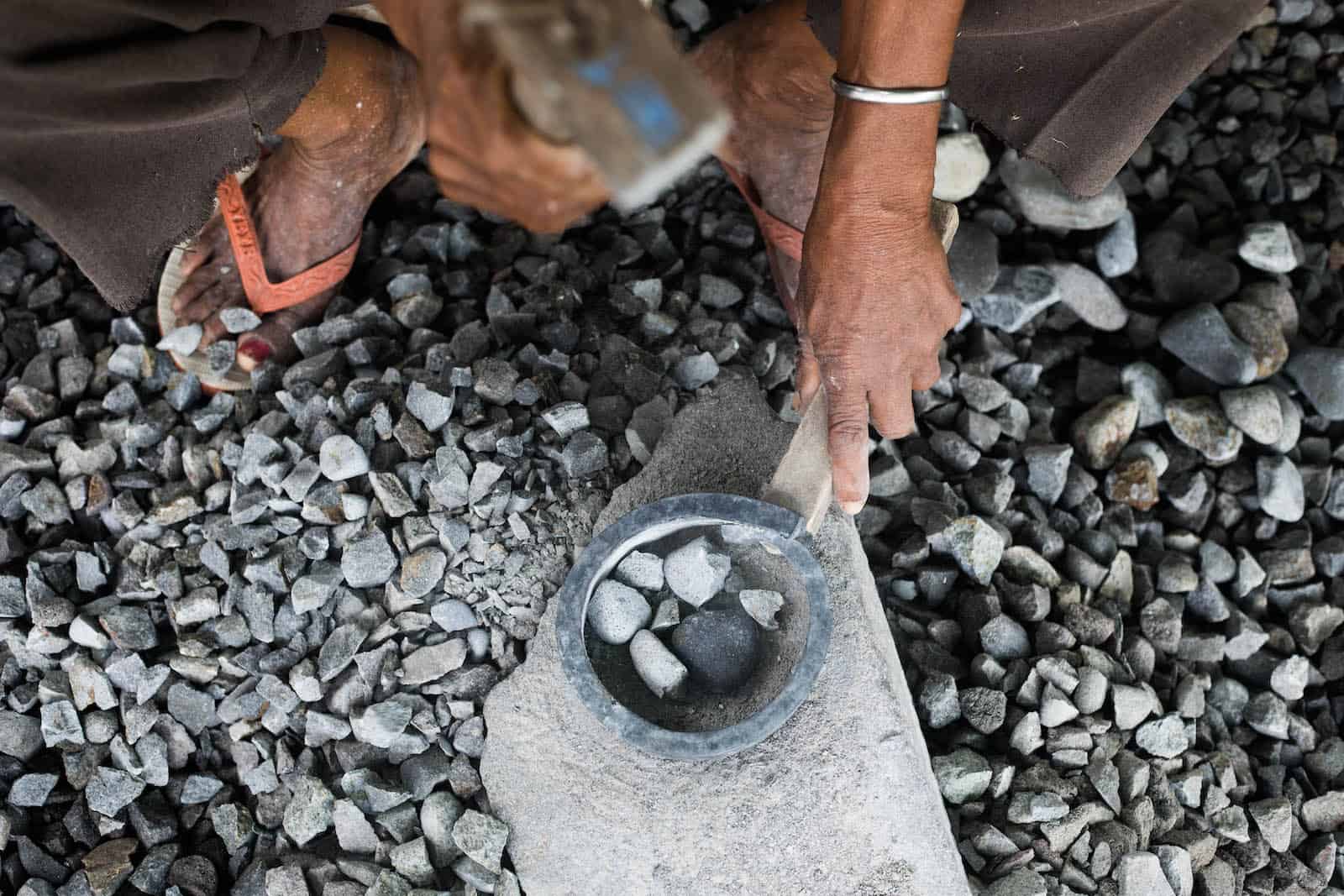 And without protective eyewear, the couple frequently suffer from airborne stone particles landing in their eyes. Because of years of damage to his eyes, Yulius cannot see well.

“The first year I was a stone breaker, my fingers and eyes were often hurt. But over time, I have gotten used to it,” Yulius says.

Yulius and Hartini never attended school and cannot read or write. But the couple’s granddaughter, Kasi, for whom they are the primary caregivers, is in Compassion’s program. 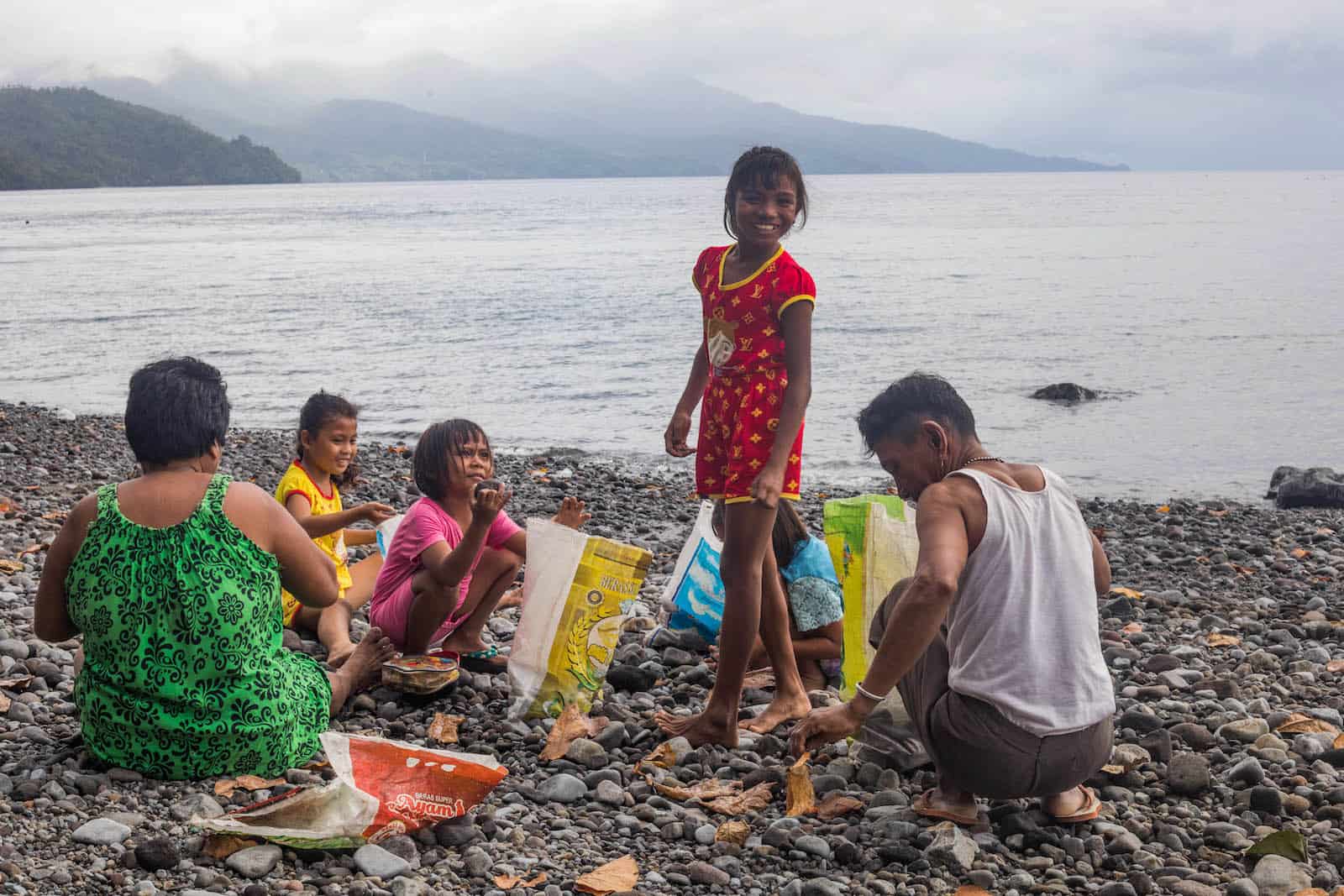 Kasi and her friends sometimes help her grandparents collect rocks on the beach, but because she is sponsored, she will get an education rather than becoming a rock breaker.

“My family is really poor. I’m glad that my granddaughter has a sponsor who is willing to support her,” Yulius says. “I feel sad when I can’t get money because it means my family can’t eat. But at the Compassion center, they also support Kasi with food.”

Kasi’s grandparents and all the center staff hope and believe that, with their sponsors’ help, Kasi and the other children will have safer jobs when they grow up.

Each of these people love their families and sacrifice to provide. But they are so grateful their children will have a better future away from their extreme jobs. 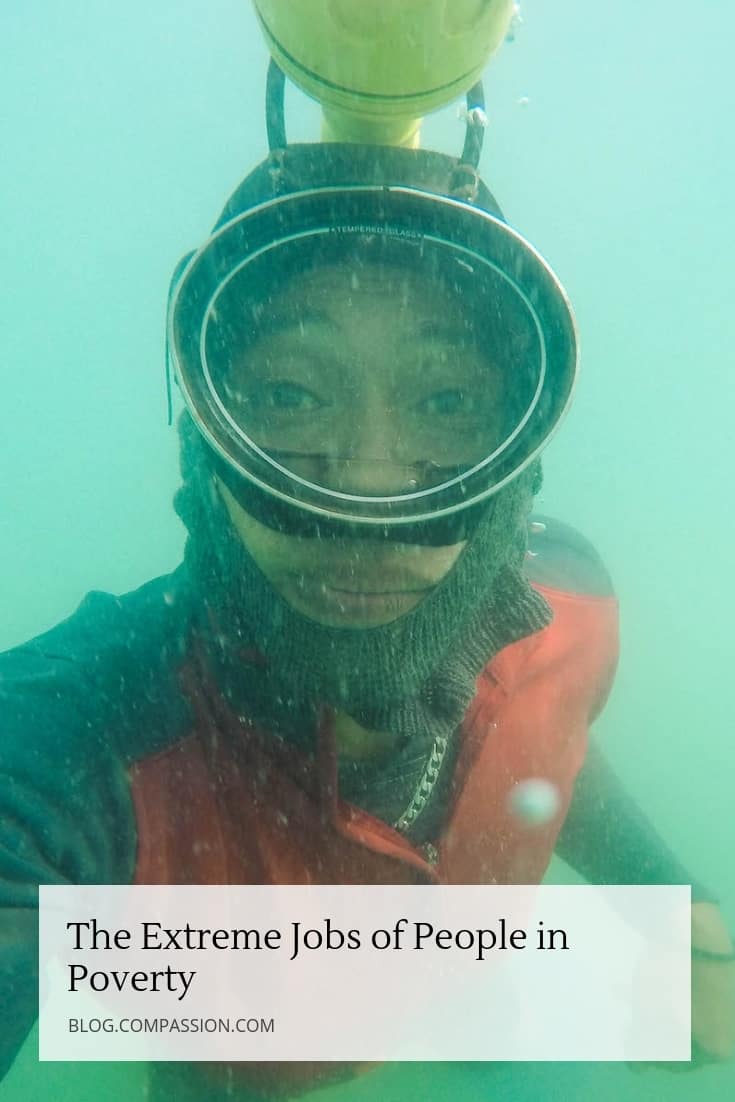 Prev Post:Help! These “kids” are so cute, we can’t make up our mind!Next Post:Shooting for the Moon: 6 Kids in Poverty Share Their Dreams