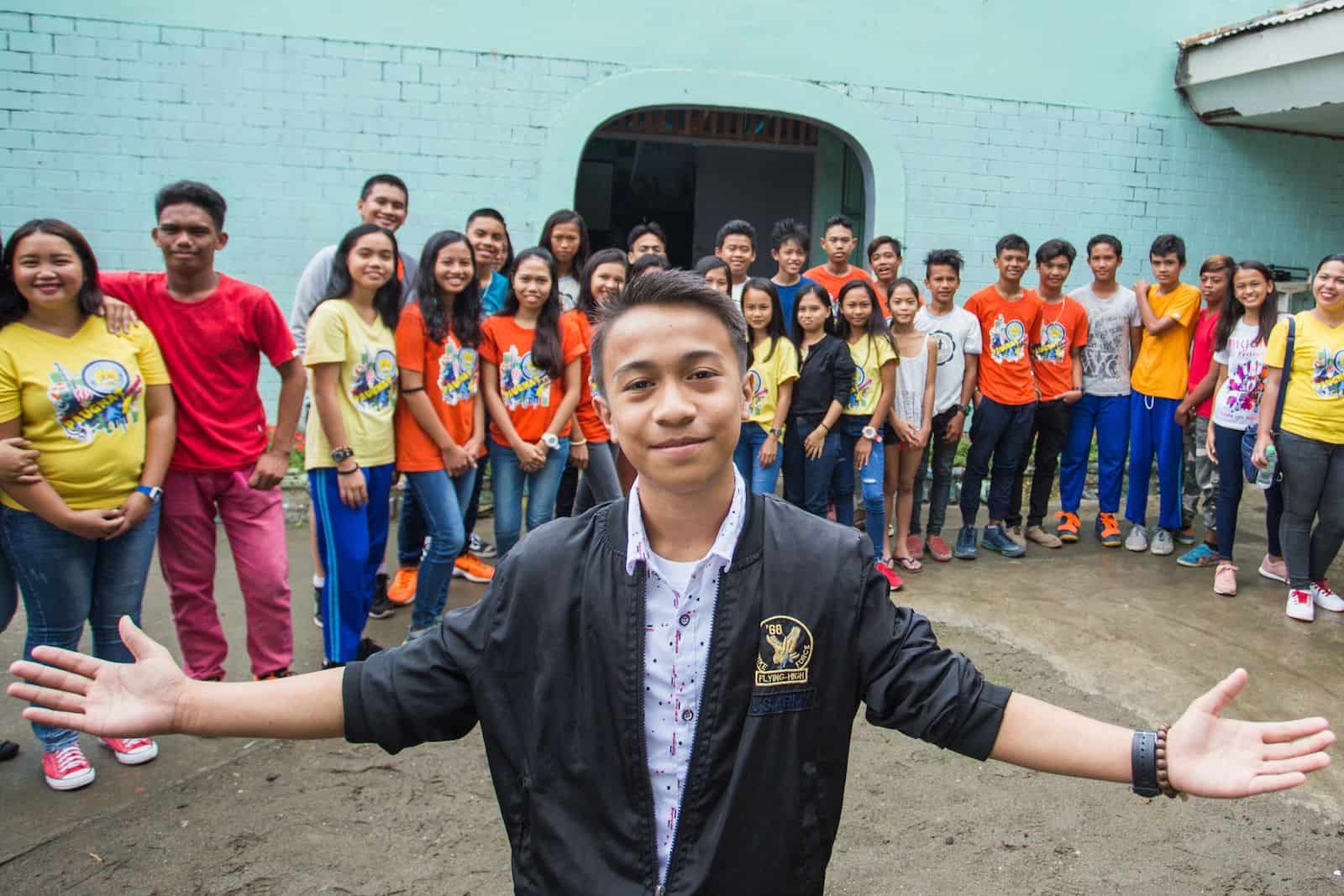 This is no small accolade, as Jay Mark, a Compassion-sponsored child from the island of Mindanao, was awarded the title after a yearlong, nationwide search. The Philippine Department of Social Welfare and Development bestows the award to a child in the Pantawid Pamilya, a government program that supports the poorest Filipino families.

To be named Most Excellent Child in the Philippines, Jay Mark participated in academic tests, talent competitions and panel interviews. Over the course of several months, the competitions progressed from interschool, to provincial, regional and, finally, a national level.

“It was definitely an experience and honor I can never forget,” says Jay Mark. 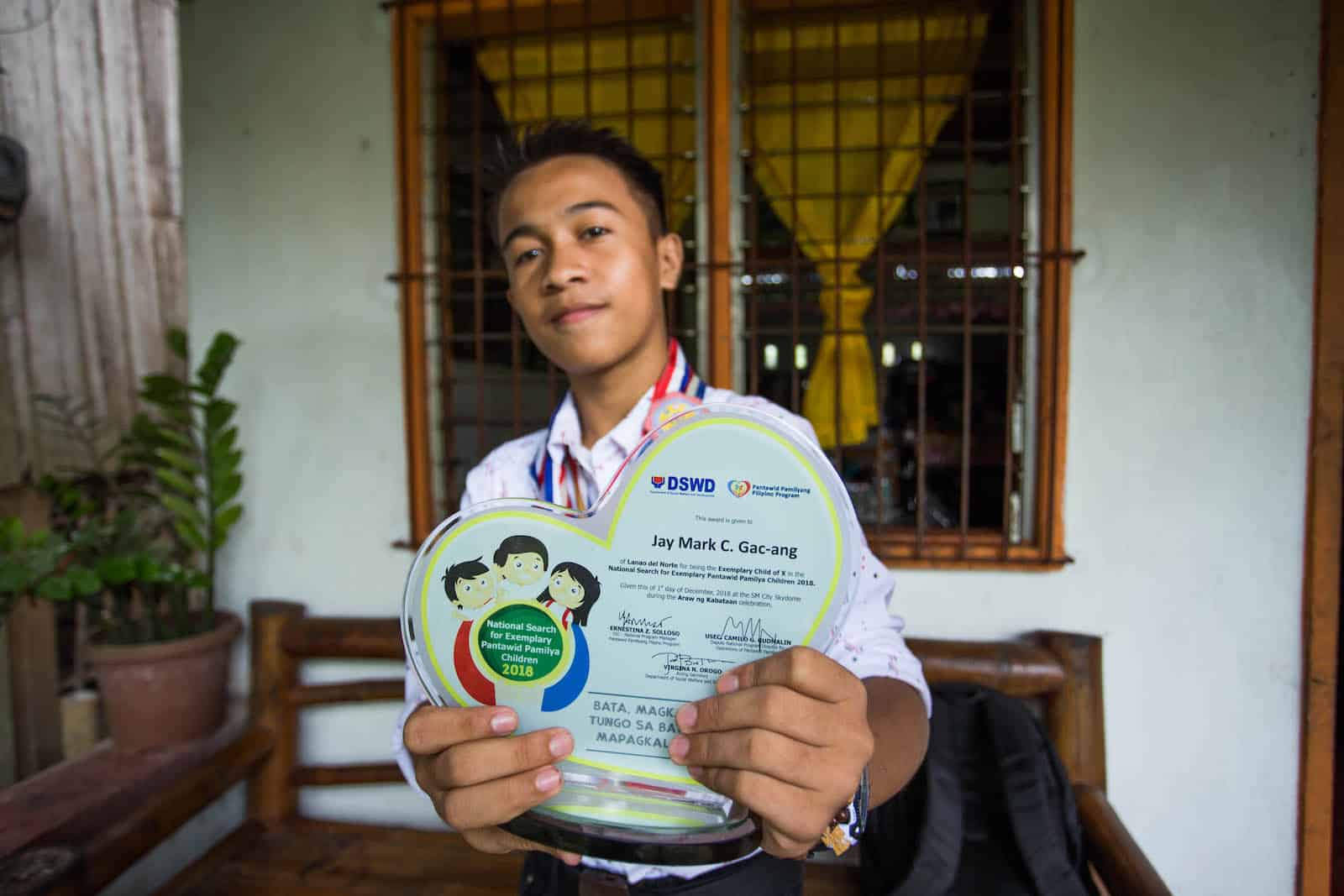 The award ceremony — shown on national television — featured an interview with Jay Mark. During the presentation, he received a plaque, gold medal and U.S.$575, which he used to buy a laptop.

“There were politicians, national leaders and well-known celebrities attending the awarding ceremony, which was held in the capital city,” says Jay Mark. “It was my first time to ride an airplane, see the capital city and meet famous people. I never thought I would see Manila in my lifetime!”

The Road From Poverty to Most Excellent Child in the Philippines

Mindanao, the Philippines’ southernmost group of islands and the location of Jay Mark’s hometown, Kapatagan, is riddled with social conflicts and political unrest. His father works as a pedicab driver, earning about U.S.$7.70 per day to support his family of seven. The family’s poverty qualified them for the government’s Pantawid Pamilya program. Jay Mark also qualified for the local church-based Compassion center, where he has become an outstanding young leader.

“I grew up under the shadows of poverty, but I never wavered in my dream of pursuing excellence in my studies,” says Jay Mark. 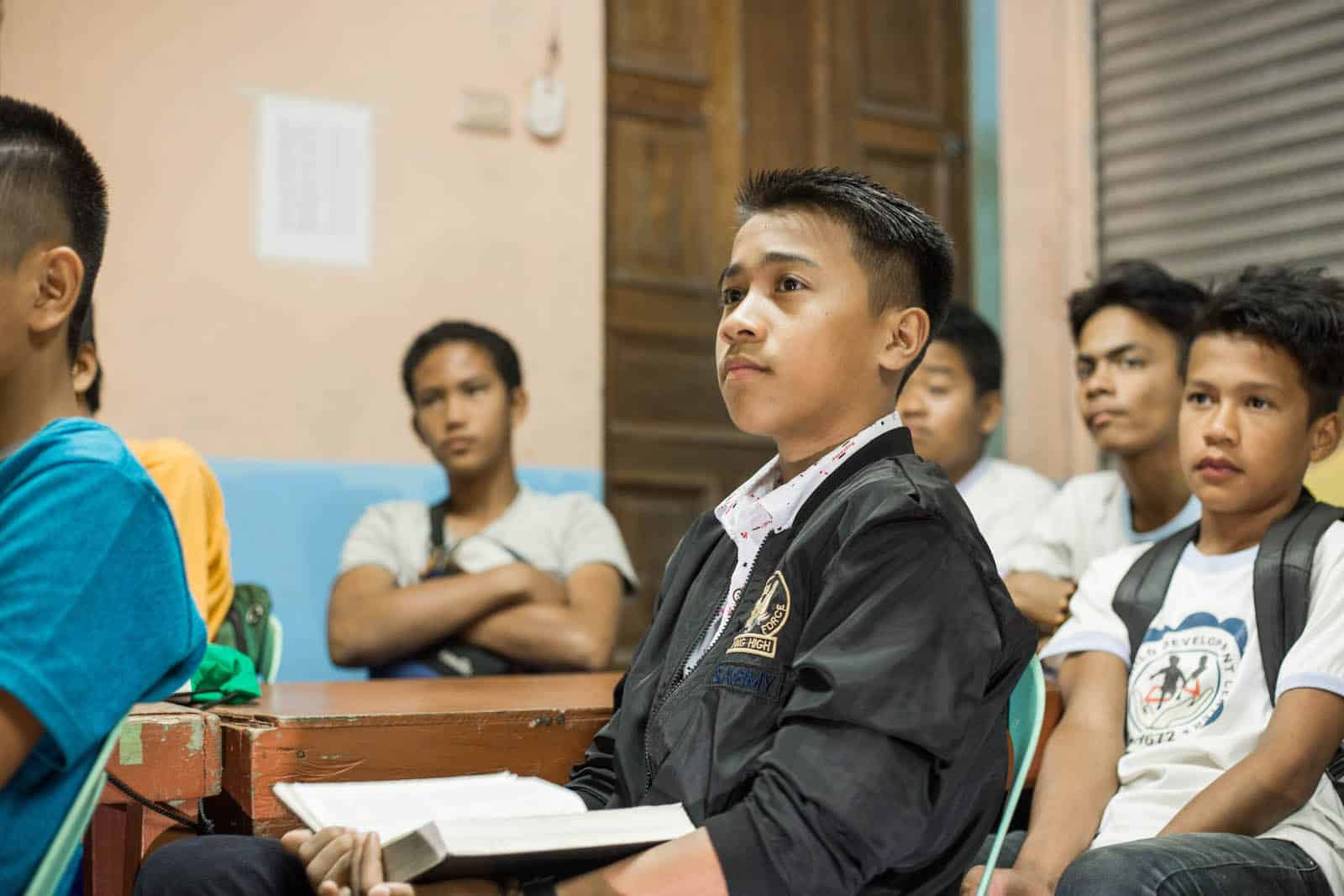 His Compassion center ensures that hardworking students like Jay Mark can attend school by providing for educational necessities such as books, supplies, school uniforms and shoes. Children also receive tutoring at the center to help ensure they succeed academically.

“Being part of this program is one of the biggest gifts God has given me, because my parents haven’t had to worry about my school expenses.”

Maricris Quinimon, Director of Jay Mark’s Compassion center, describes him as respectful, funny and attentive in class. He’s active at church and a good role model. In school, Jay Mark has maintained a 95.7% grade average. And besides all that, he writes for the school paper, participates in a jazz club and leads the debate team!

Jay Mark credits the church and Compassion center for enabling him to overcome the challenges experienced by the young people of Kapatagan.

“In our community there are lots of challenges that teens like me face. Drug addiction, school absenteeism, gangs and teenage pregnancy are rampant here. This is why many youths don’t succeed in finishing their schooling,” he says.

A Bright Future Ahead

Juanita, Jay Mark’s mom, knows her son has a lot to look forward to.

“He is very confident, and I think he could be a good lawyer some day. I believe he developed his talents and self-confidence at the Compassion center.” 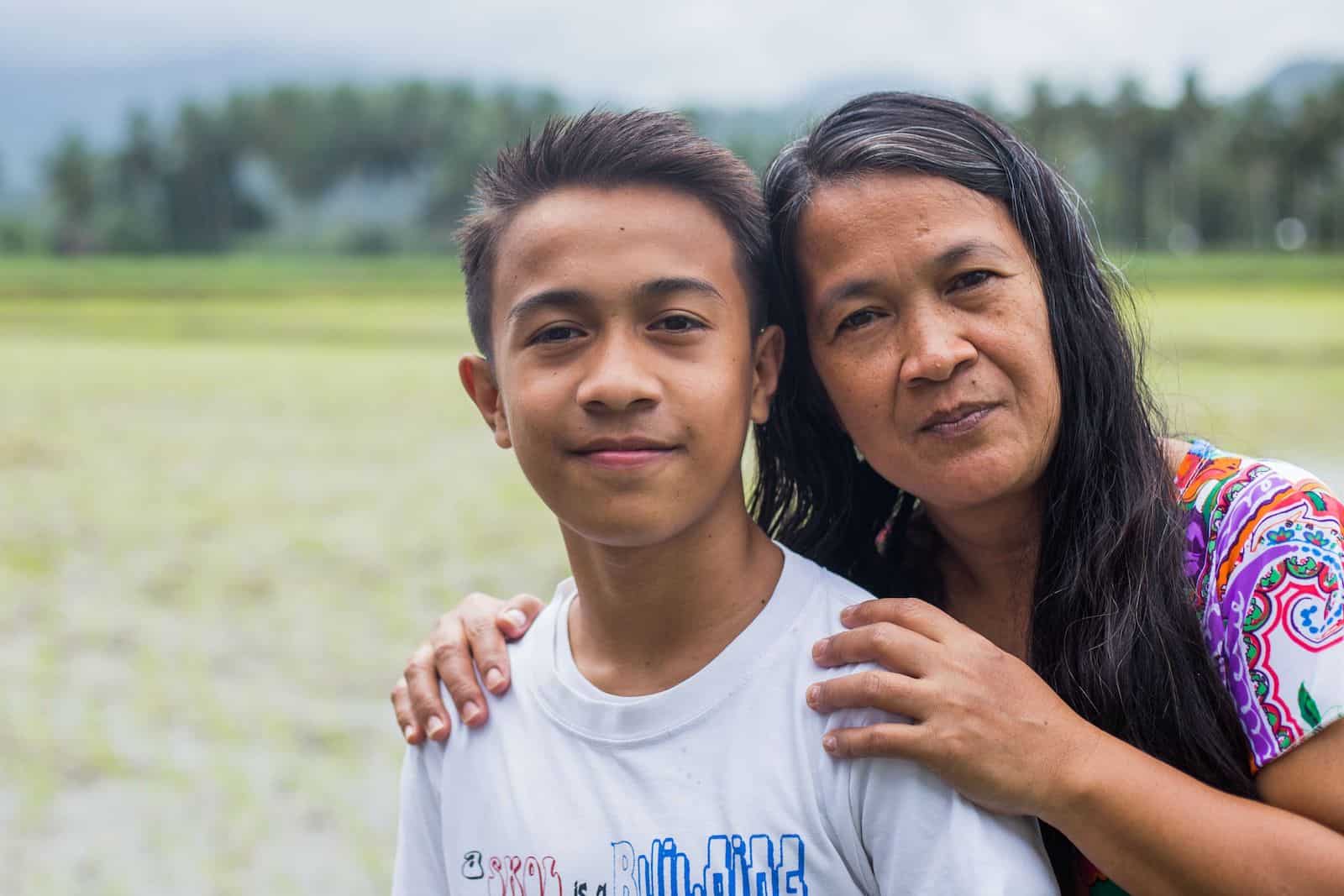 As this year’s Most Excellent Child in the Philippines, Jay Mark will represent the awards body in several academic activities. Many students now recognize him around the province, and he hopes that this momentum will lead to an opportunity to study in one of the leading universities in Manila.

“It’s a big deal having won,” says Jay Mark. “I am grateful to my family, church and Compassion. I intend to continue to join such competitions and win!”

Please congratulate Jay Mark in the comments on this remarkable accomplishment of being the Most Excellent Child in the Philippines! 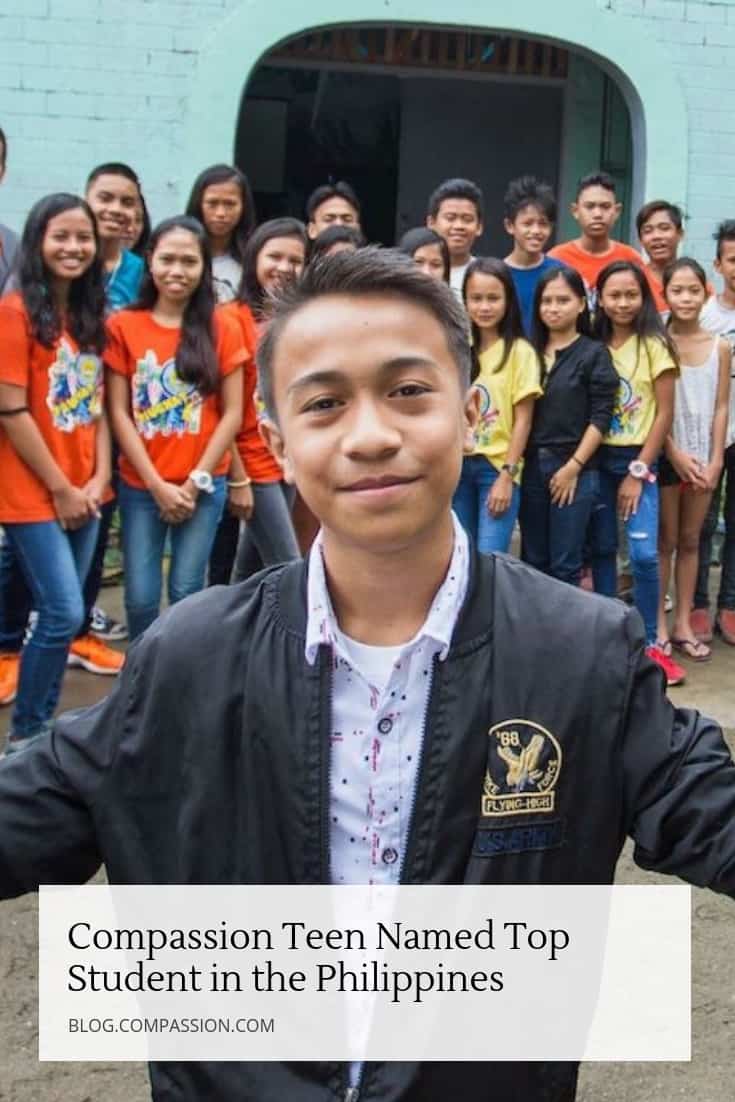 Prev Post:Why This Girl No Longer Thinks She Is a FailureNext Post:3 Ways to Keep Local and Global in Your Hands